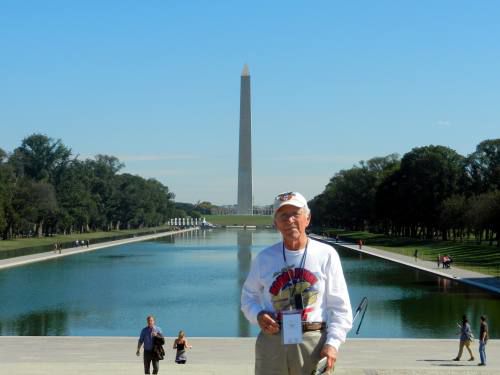 Frank Burder enjoyed being a guest on the Honor Flight, a trip to Washington, D.C. to visit the nation\'s monuments. He said that was the first time that he got a real welcome home from the war. 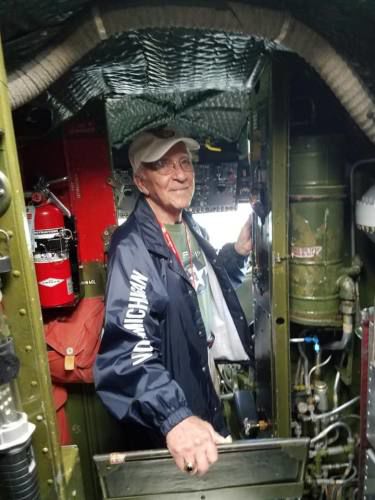 Frank Burder, a World War II veteran who flew C-47 cargo planes in the South Pacific, stands at the cockpit of an original C-47 that has been restored and offers flights at air shows. 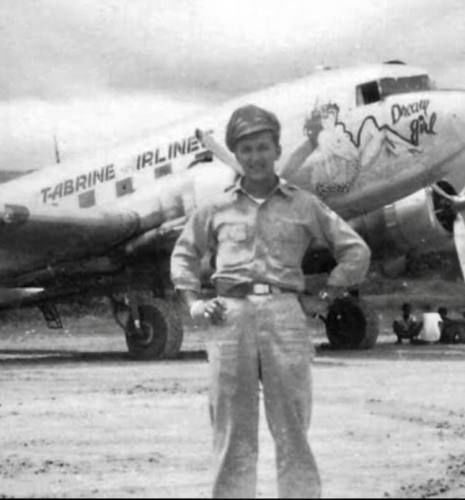 Frank Burder was about 20 years old in this photo taken during World War II, when he was the pilot of the C-47 cargo plane in the background. 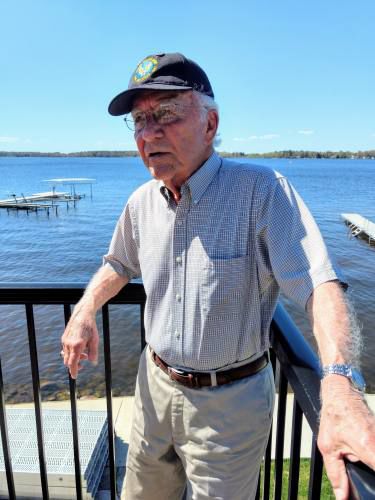 World War II veteran Frank Burder, 95, recently recalled what it was like during the last days of World War II when he was a pilot in the South Pacific. 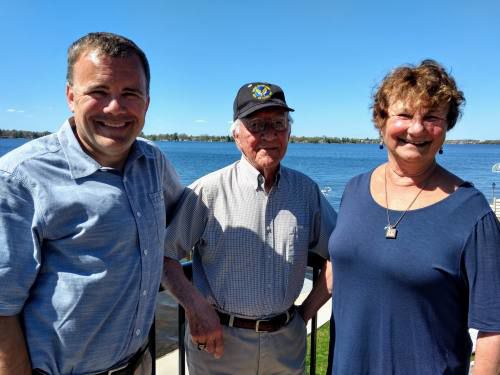 Frank Burder enjoyed being a guest on the Honor Flight, a trip to Washington, D.C. to visit the nation\'s monuments. He said that was the first time that he got a real welcome home from the war.

Frank Burder, a World War II veteran who flew C-47 cargo planes in the South Pacific, stands at the cockpit of an original C-47 that has been restored and offers flights at air shows.

Frank Burder was about 20 years old in this photo taken during World War II, when he was the pilot of the C-47 cargo plane in the background.

World War II veteran Frank Burder, 95, recently recalled what it was like during the last days of World War II when he was a pilot in the South Pacific.

INTRO - It's Memorial Day weekend. Monday is the national holiday that honors those who died while serving in the U.S. military. Every year the Cadillac Area Honor Guard has organized events to help us celebrate and remember, including a wreath laying ceremony, a parade featuring veterans and their families followed by a Memorial Service for fallen veterans in Veteran's Memorial Stadium.

Unfortunately these events have been canceled this year.

But this year also marks the 75th anniversary of the end of World War II. Nationwide tributes began on May 8 to remember the end of the war in Europe and will continue through September 2 to mark the end of war in the Pacific.

Cadillac's Frank Burder, a World War II cargo pilot, remembers what it was like in the South Pacific when the war with Japan finally ended.

CADILLAC - Last summer Frank Burder stepped inside a C-47 cargo plane for the first time since the end of World War II. His family gifted the veteran pilot with a flight on the restored, vintage aircraft, "Hairless Joe."

Four generations of Burders took that Father's Day flight, including his grandson and great-grandson, Kevin and Chris Anderson, and his son Thomas.  At first, Burder didn't say much while seated back in cargo. But when the pilots found out they had a World War II veteran on board, one who flew the C-47, they invited him into the cockpit.

"The pilots just lit up when they found out who they had," said Kevin. "They almost never let anybody in the cockpit. And when they did, it triggered this massive pile of stories."

"I sat down in that old pilot seat that I spent so much time in and it brought back a lot of memories," Burder said. "Getting back in the cockpit, it was pretty much the same. It was a thrill."

Burder was 19 when he started flying with the Army Air Corps 13th Troop Carrier Squadron in the southwest Pacific Theater. He estimates that he logged 800 to 1,100 hours soaring over the Pacific ocean.

"The troops would land on an island, secure it, open an airstrip and we would fly in supplies and fly out the wounded," Burder said. "The islands were just jungles. I flew over jungles. When I flew over Manila - that was the first city I saw. I flew in to pick up the wounded and the airport was blown apart. I landed on the highway and that was not thrilling, the city had been flattened. The navy had pulled up in the harbor and shelled the city, it was a revelation to see the devastation of the war."

Burder later ran a shuttle to Sydney, Australia - back and forth up the coast.

But his first flight to Sydney was a little nerve-racking.

He was a C-47 co-pilot when his commanding officer asked if he could fly the plane. Burder answered yes and was ordered to fly one from New Guinea to Sydney to pick up 21 fighter pilots. There would be no co-pilot. He would be on his own with a navigator.

"A crew chief backed out of that flight, he was scared to go with me," Burder laughed.

"I've heard these stories since I was a kid," Kevin said. "I think I became a private pilot because of that. Those stories about being 19 and just having to do what you have to do influenced me. They didn't have a choice - they were told to get it done."

"It was a thrill I suppose, the round-trips to Sydney," Burder said. "I was flying the transport plane and I was rarely shot at, maybe a couple of times. But I was not in danger like the guys that flew over Germany in the 8th Air Force. Those guys were rarely over 20 and more boys died over Germany in B-17s than the marines in the entire war."

But transport planes, according to Gen. Dwight D. Eisenhower, helped the Allies win the war. And the 13th flew 9.7 million miles in three years and supported six battles.

At 95, Burder just passed his physical with a thumbs up, "everything's good," said his daughter Linda Anderson.

He grocery shops, cooks and before the quarantine, he frequented Viking Girls Basketball games to cheer on his great-granddaughter Molly Anderson. He loves to go on cruises and he enjoys eating out, especially the Friday fish fry at the Mineral Springs Bar. He's a widower who earned a degree in mechanical engineering after the war. He retired from Fisher Body in Detroit where he headed up the group responsible for wiring on all Ford Trucks.

On May 8, 1945, the Germans surrendered and Victory in Europe was celebrated with flags, banners and parades.

But the war with Japan dragged on with the enemy vowing to fight until death.

"I was in the Pacific somewhere in New Guinea. We didn't celebrate V-E Day. I don't think it affected us very much," he said. "At least the Germans surrendered, but the Japanese were instructed not to surrender."

That summer the Allies made plans to invade Japan in late fall. But the invasion was canceled after August 6, when a B-29 bomber dropped an atomic bomb on Hiroshima.  Still, it wasn't until August 14 and August 15 that Victory over Japan was celebrated.

"We were glad it was over but we were all baffled about the news of the bomb. We heard they dropped the bomb and nobody could imagine what it was," Burder said. "It was a very confusing time. The war ended but the Allies didn't know what was going to happen (during the post-war occupation of Japan). They expected a battle when they landed but that didn't happen."

Now it was time to bring the troops home.

Burder waited in a transient camp in Manila with hundreds of soldiers to get transportation home.

"It wasn't very pleasant," he said. "After breakfast, you got in line for lunch, that's how long the lines were. The camps kept receiving people who had finished their tours."

Because Burder was an officer he had priority and was soon on a ship to San Francisco followed by a slow train to Chicago. He can't remember the exact month he arrived home in Birmingham, Michigan, where there was a Welcome Home sign in the window. But he remembered that there was no snow on the ground, so he thinks he made it home for Christmas.