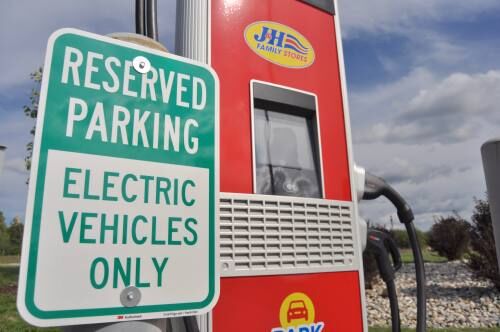 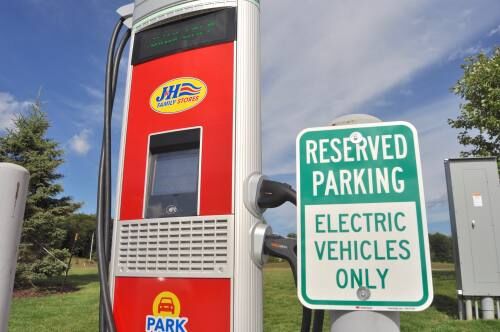 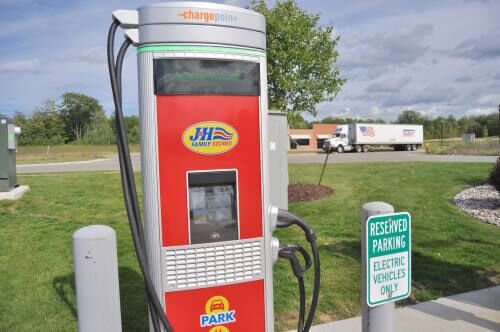 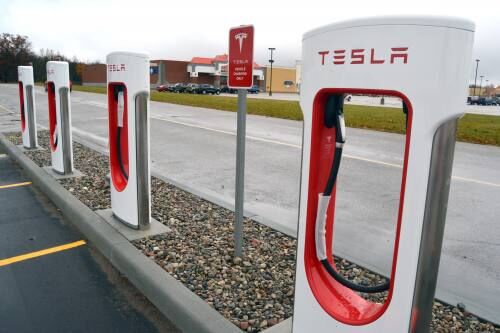 Pictured is the Telsa charging station installed in Haring Township in 2015.

Pictured is the Telsa charging station installed in Haring Township in 2015.

CADILLAC — For the first time ever, a business in the city of Cadillac is now able to offer charging service for those with electric vehicles.

Consumers Energy Media Relations Manager Brian Wheeler said with around 40 different electric vehicle models on the roadways today, the need for charging stations across the state continues to grow.

"We're moving in the direction of more electric vehicles," Wheeler said. "The feeling is that we need to build this infrastructure."

Wheeler said Consumers Energy offers a program that subsidizes up to $70,000 of the cost of installing the chargers, which means the expense for housing these units is quite modest for those businesses that qualify.

"This really is about local economic development," said Wheeler, who added that the more stations that are available in Michigan, the more opportunities for attracting electric vehicle drivers to all corners of the state.

“Consumers Energy is excited to build the backbone of the state’s infrastructure for carbon-free vehicles,‘ said Brian Rich, Consumers Energy’s senior vice president for customer experience. “We are serving the public’s interest in electric vehicles, not just with these fast charging stations, but with over 400 rebates that our PowerMIDrive program has approved for homes and public locations across Michigan.‘

Fast charging stations connected to the PowerMIDrive program are now operating in Gaylord, Cadillac, Big Rapids and Marshall. The stations typically charge an electric vehicle battery from zero to up to 80% in an hour, giving drivers the power to travel long distances on vacation or for work.

According to a Consumers Energy press release, the Edison Electric Institute forecasts over 18 million electric vehicles will be on U.S. roads by 2030, and Michigan has seen year-over-year electric vehicle growth of more than 20%.

Loren Hoppen, operations manager for J & H Family Stores, said they were approached by a company called West Side Solutions, which helped them obtain the Consumers Energy credit to install the charging station.

Hoppen said the idea of installing a station in Cadillac was to "connect the dots" between the existing stations in mid-Michigan and those to the north, including the Upper Peninsula.

Since the charger has only been in operation a few weeks, Hoppen said it's hard to say how much use it will get, although he added that they've had a few customers already.

While the charger is a big plus for J & H Oil, Hoppen said without the incentive program offered by Consumers Energy, they likely wouldn't have been able to install it.

"The cost of entry is much higher than what you make from it," Hoppen said. "If we didn't have the grants, we wouldn't have done it."

A representative of ChargePoint told the Cadillac News that charging rates vary by location relative to the goals of the business or entity that is housing the station.

For instance, about 70% of ChargePoint stations offer free service, while others charge per kilowatt hour or a flat fee — such as the $1 flat fee at the Evart station. Among those that charge, most often the fee is the going rate of electricity.

The representative added that high-end Tesla vehicles can run about 240 miles on a single charge while most new electric vehicles from other manufacturers can run about 190-200 miles without needing to be recharged again.

While the Tesla station in Haring Township only works for Tesla vehicles, the ChargePoint stations power electric vehicles from a variety of manufacturers.

Tesla has been expanding its charging footprint in Michigan but a bill passed in 2014 known as the “anti-Tesla‘ bill prevented the company from selling cars or opening service stations in the state. Earlier this year, a lawsuit that Tesla filed against the state in response to the bill's passage was settled, allowing the sale of Tesla vehicles in Michigan.

Driving an electric car offers a clear fuel-cost savings but the vehicles still are fairly expensive compared to a traditional vehicle, about $36,000 compared to $64,300-$55,600, according to the business news website Quartz.

Consumers Energy has indicated that up to 30 more fast charging stations should be operating by early next year across the Lower Peninsula, in communities such as Flint, Kalamazoo, Muskegon, Jackson and Kalkaska.

PowerMIDrive is still accepting rebate applications for home and public electric vehicle chargers: incentives include rebates worth $500 for installing eligible 240-volt chargers at homes and rebates for 200 Level 2 vehicle chargers in public places and at workplaces, with a rebate of up to $5,000 per charger.