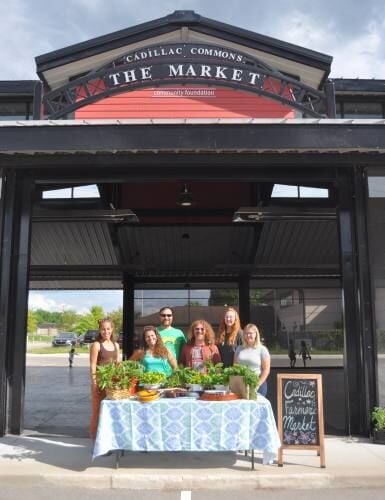 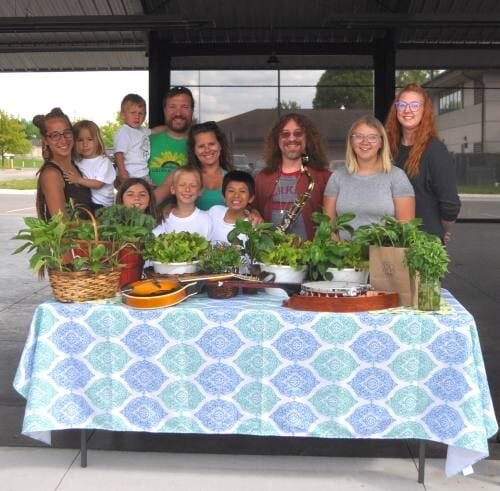 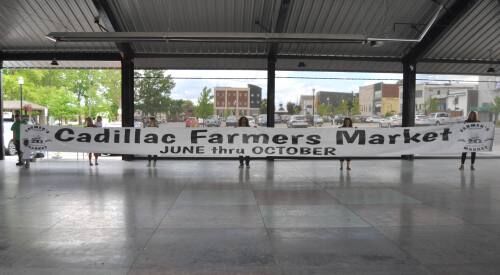 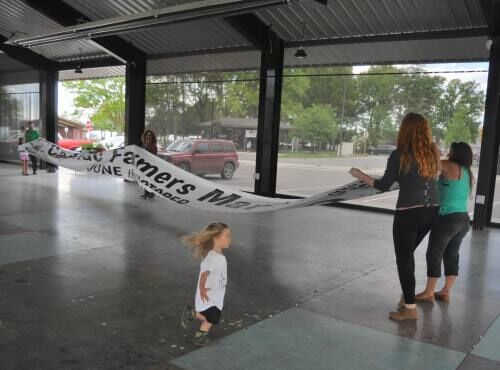 Farmers market organizers unfurl their new banner that will be displayed periodically over Mitchell Street at the intersection with Cass Street.

Farmers market organizers unfurl their new banner that will be displayed periodically over Mitchell Street at the intersection with Cass Street.

CADILLAC — Fruits, vegetables, BBQ, a live beehive, acoustic music and Elvis — it's all happening this summer at the Cadillac Farmers Market, which will be returning to the Market at Cadillac Commons this Friday.

"It's coming back bigger and better than ever," said Mary Galvanek, who took over as market manager at the end of last year after longtime manager Jean Kohler stepped down.

The farmers market began 40 years ago in an area next to Lake Cadillac that now is the parking lot immediately south of the Rotary Performing Arts Pavilion. From their original location, they migrated across Lake Street to a parking lot next to the AMVETS building, and in 2019, they moved to the Market at Cadillac Commons.

With four children to take care of, Galvanek kidded that one of her motivations for getting involved in the farmers market was because she needed "as many grandmas as I can get."

When she and her husband, Al Hubbell, lived in Denver a couple of years ago, Galvanek managed a farmers market there and hoped to bring some of the tricks she learned in Colorado to Cadillac.

"I thought this would be a great way to become a part of the community," Galvanek said.

Galvanek previously told the Cadillac News her big-picture goal was to increase the number of visitors to the farmers market from 200-300 people per week to 600.

From the looks of things, Galvanek and her team of organizers — including business partner Sarah Saldivar, assistant Emily Ruppert, social media and marketing specialist Brandy Waltemyer, and entertainment coordinator Dan Belleville — are well on their way to achieving that goal.

A number of new farmers will be displaying their produce at the market this year; Galvanek said reaching out to farmers who previously didn't have a presence at the market is something she spent a lot of time doing since taking over as manager.

In addition to farmers, a number of other vendors also will be displaying their products, which will include crafts, plants, baked goods, bees and natural medicines, to name a few things.

All told, Galvanek said the market will feature 30-40 vendors every day it is held. She said they'll provide updates on their Facebook page about the various vendors they'll be hosting on a regular basis.

In addition, food and beverage items from three local establishments — Chico's Taco House, Primos BBQ and Cornerstone Coffee — will be for sale at the market, as well.

The market also will feature children’s games and activities, and live music from a number of local performers.

Galvanek said another large event they have coming up this year is the Halloween/harvest celebration on Oct. 30.

While most of the live performances will be held within the Market at Cadillac Commons, Galvanek said larger acts such as the Elvis impersonator will set up nearby, in the Rotary Performing Arts Pavilion.

On select dates when the Market is being used for other purposes, Galvanek said the farmers market will be set up across the street, in the Cadillac City Park.

Crossing all the t's and dotting all the i's involved in putting this year's farmers market together has been an extensive effort, and one that Galvanek said wouldn't have been possible without her team.

"Everyone has been so dedicated," Galvanek said. "Willing to give up some sleep to make this happen."

Throughout the process, Galvanek said she's really enjoyed the tightknit "sense of small town community" that she remembers growing up with in Cadillac, as well as learning about the interaction between groups such as the farmers market and city government.

For information on this year's farmers market, go to cadillacfarmersmarket.org, check them out on Facebook, or email cadillacmarketmaster@gmail.com.