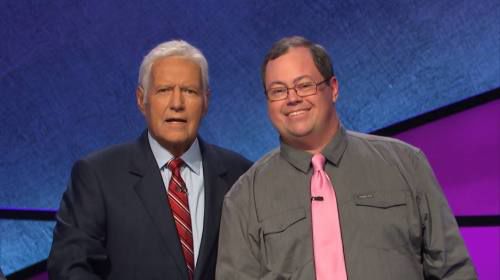 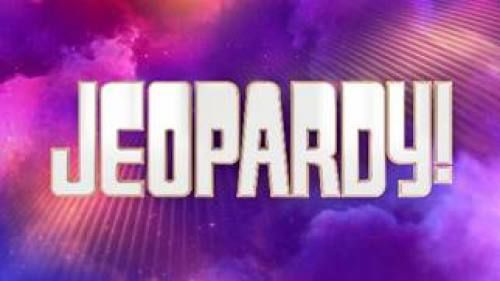 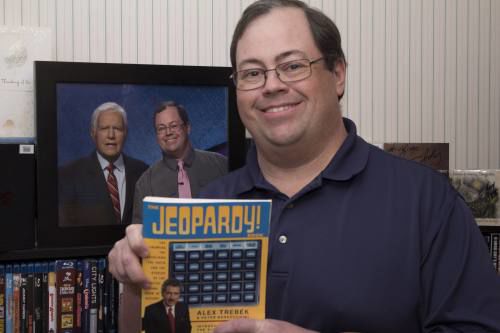 Cadillac\'s Ben Scripps tried for 12 years to make it onto the game show JEOPARDY. In 1990 he bought the book and tonight he will be a contestant on the show. 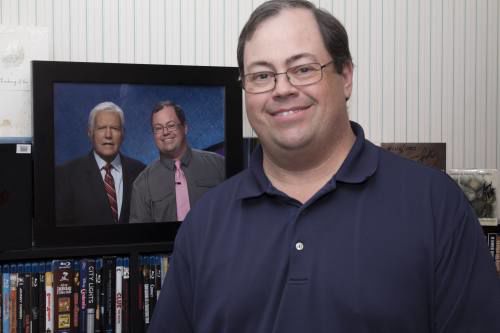 Cadillac\'s Ben Scripps tried for 12 years to make it onto the game show JEOPARDY. In 1990 he bought the book and tonight he will be a contestant on the show.

CADILLAC — Early last March, Cadillac’s Ben Scripps had one of the best days of his life.

That was the day that Scripps was a contestant on JEOPARDY.

On the flight from Michigan to Los Angeles he reviewed the JEOPARDY archives and played a bunch of practice games.

The next morning, he took a 7 a.m. shuttle from his hotel to the Sony Pictures Studios in Culver City for the taping. His appearance will be broadcast tonight at 7:30 p.m. on WPBN-TV (NBC).

Hopeful contestants can take an online qualifying test any time. But when Scripps first applied, the test was only offered once a year. Every year for 12 years he took the test.

“Some 80,000 people take the test every year,‘ he said. “Out of those, 2,500 get picked for the in-person audition and of those, there are 400 chosen for slots to appear. There are a lot of odds you have to beat to get to this stage.‘

Last August he received an email invitation to an in-person audition in Chicago.

There he took another 50-question test, played a mock game and had a personality interview.

“You try to be a friendly, outgoing and fun person but not too over the top,‘ he said. “At the same time you don’t want to be sullen. They don’t tell you what they are looking for, just that they want to find out what kind of person you are. Fortunately it turned out that I was what they were looking for.‘

Scripps is a technical director at TV 9&10 News and he has wanted to be a JEOPARDY contestant his entire life.

When he completed the Chicago interview, he was told that he might hear from them any time in the next 18 months.

When the call came last February, he almost didn’t answer. He didn’t recognize the number but luckily he saw the words Culver City and picked up.

“Honestly, I’ve been telling people, it’s still a little surreal to imagine this actually happened,‘ he said. “They called me ... it’s one of the coolest things I’ve ever done and I still can’t believe they called me.‘

“When Ben told me he got the call, I was so thrilled for him,‘ said longtime friend Rich Spicer, who met Scripps when they were broadcast students at Central Michigan University. “He’s a trivia geek and very smart, very intelligent and he has a broad knowledge on lots of subjects. I thought he would be a natural for the show.‘

How did he do?

There is no spoiler alert here. Scripps can’t divulge how he did. But he did share some observations.

His nerves were fine, not too bad. His goal was to focus on getting a rhythm of the button. And Alex Trebeck “seemed real nice. I only got to talk to him a little bit ... you will see on the episode the time I had to talk with him.‘

“On the flight out there I thought about it and decided that I was just going to have fun and whatever happens, happens,‘ he said. “And then on stage during a commercial break I had an epiphany. This is the most fun I will ever have in my life. I just knew that for a fact. I took a moment to look around and savor this moment.‘