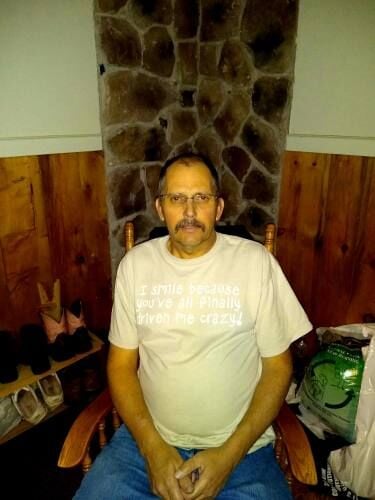 Paul Sackett\'s skin has turned a greenish yellow and he is constantly fatigued. He can\'t even mow his lawn (on a riding lawn mower) or get out of his chair without becoming exhausted. 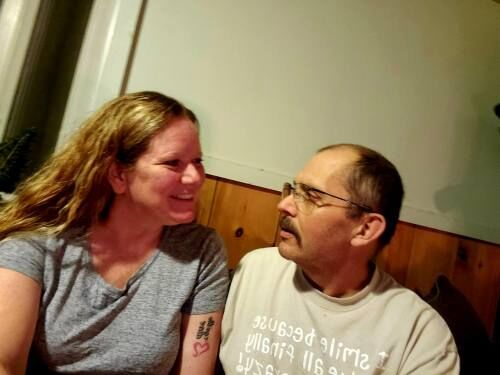 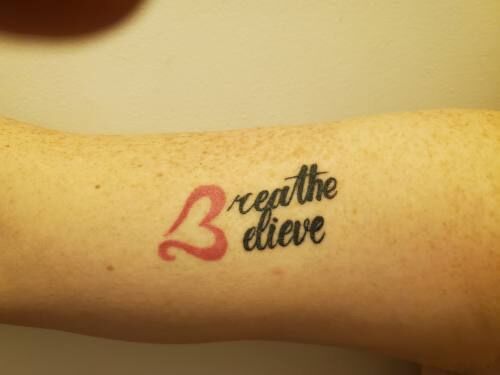 To remind Michelle to stay hopeful and positive following her husband\'s cirrhosis of the liver diagnosis and her MS diagnosis, she got a tattoo that features a heart and the words "breathe" and "believe."

Paul Sackett\'s skin has turned a greenish yellow and he is constantly fatigued. He can\'t even mow his lawn (on a riding lawn mower) or get out of his chair without becoming exhausted.

To remind Michelle to stay hopeful and positive following her husband\'s cirrhosis of the liver diagnosis and her MS diagnosis, she got a tattoo that features a heart and the words "breathe" and "believe."

CADILLAC — Bad news has come in twos lately for Paul and Michelle Sackett.

Since that time, the family have been searching for a donor willing to give a part of their liver to Paul. They found two donors, but both were disqualified.

"It's like getting a kick in the butt," Paul said. "I try not to think about it. I try to be positive."

Recently, Paul's mother-in-law (Michelle's mother) Donna Christie reached out to the Cadillac News asking for help getting word out that Paul is looking for a donor.

"(Primary Sclerosing Cholangitis) cirrhosis of the liver means his bile ducts are failing," Christie wrote. "He has been placed on a transplant list. His transplant team has recommended they reach out to social media for a live donor (instead of a liver from a cadaver) ... My son-in-law and daughter are givers and not one to ask for help. These two have planned and helped with numerous benefits. They are always ready to help others. This has been a very trying year for them but they have tried to remain positive."

Paul said symptoms of cirrhosis appeared last year when he started to mysteriously lose weight, going from 215 to 165 pounds.

One day, he was at his place of employment — AAR, where he met Michelle, who still works there — when a co-worker commented that he didn't look too hot.

"They asked me if I was OK," Paul said. "That I looked gray and awful."

Paul said he took a little break and when he was feeling better, went back to work. Afterward, he decided to get checked out. As he was on his way home from a visit to the hospital to get his blood drawn, his doctor's office called and told him to return to the emergency room immediately.

"They said I lost about three pints of blood," Paul said.

Paul's cirrhosis was caused by a rare auto immune disease that affects his bile ducts.

Michelle said doctors at the University of Michigan have told them that Paul's cirrhosis was caused by bilirubin building up in his system and not filtering through his liver correctly because his bile ducts are malfunctioning.

Paul's skin has turned a greenish-yellow and he is constantly fatigued. He can't even mow his lawn (on a riding lawn mower) or get out of his chair without becoming exhausted.

"I could sleep 14 to 16 hours after mowing the lawn," Paul said. "I can't do the things I used to do. I can't even paddle a canoe anymore. It's hard to tell your grandsons you can't go fishing with them because you're dizzy from your medication."

To keep his disease under control and his skin from itching incessantly, Paul checks his blood two to three times a month and takes 10 pills every morning and a couple more in the evening.

In addition, every other month, Paul goes to the University of Michigan Hospital to undergo an outpatient procedure to remove the bilirubin that isn't filtering through his liver.

"The procedure is similar to like they do with the heart valves where they use the balloons and stents to open up his bile ducts," Michelle said.

He's been out of work since October and if he isn't able to come back within the next two years, he'll lose his job.

"It drives me crazy because it would have been my 30th year there next year," Paul said.

Michelle said that due to his condition, Paul doesn't score high enough on the transplant list to allow him to use a cadaver's liver, which is why they've been looking for a live donor.

Since Michelle is Paul's caregiver and has been diagnosed with MS, she can't be a donor. The other two donors who stepped forward were denied because one's liver was too fatty and the other had an A1C level that was too high.

Michelle was diagnosed with MS following an incident when her vision became blurry and she lost her balance. While her condition is serious, Michelle said her main focus right now is on her husband, who has been told he may only have a few years to live, or less, depending on the progress of the disease.

"He has an opportunity, with a donor, to lead a nearly normal life," Michelle said. "I on the other hand, will deteriorate with the MS. He is going to eventually need his strength to push me around in my wheelchair."

Paul's blood type is O. Potential donors have to be between 21 and 55 years old. Michelle said there have been no out-of-pocket expenses for those who've come forward interested in getting tested to determine if they would be a match.

According to the University of Michigan, "As a living liver donor, a portion of your liver would be surgically removed and transplanted to the recipient. Following donation, a healthy liver can regrow in a short period of time. This results in both the donor and recipient having livers of relatively normal size and function."