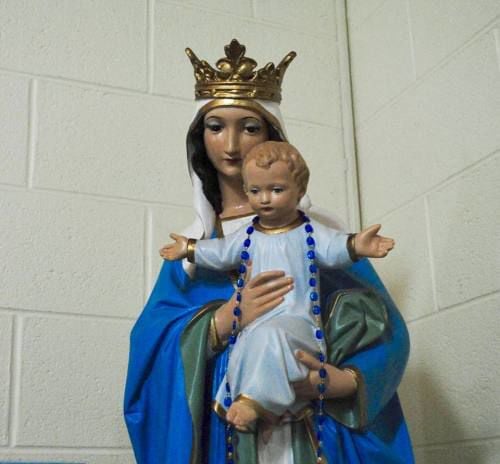 The Virgin Mary and Jesus in St. Stephen Catholic Church\'s lobby in Lake City on Jan. 15, 2019. The Cadillac News respected requests to not take photos in the church\'s sanctuary during mass or the meeting. 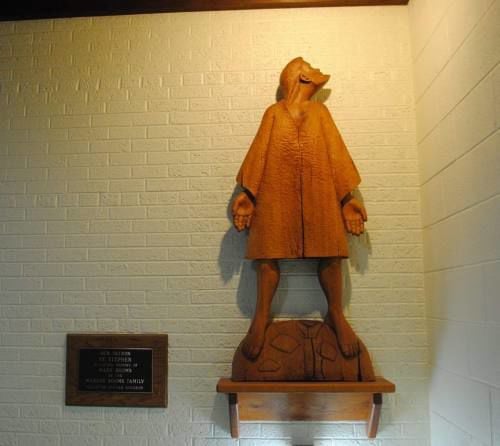 A tribute to Saint Stephen in St. Stephen Catholic Church\'s lobby in Lake City on Jan. 15, 2019. The Cadillac News respected requests to not take photos in the church\'s sanctuary during mass or the meeting. 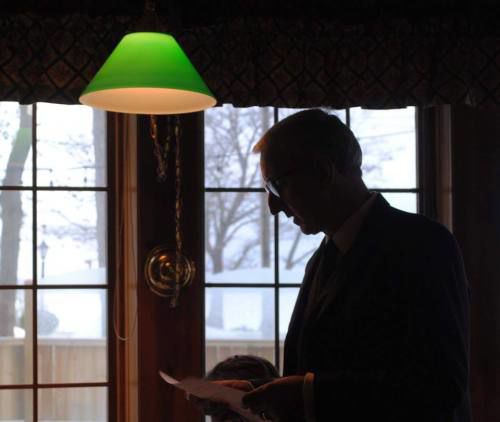 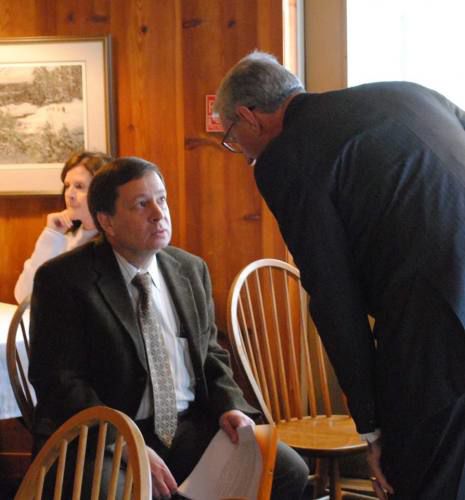 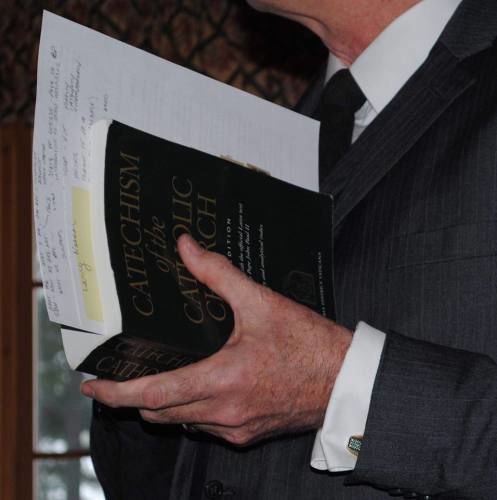 Gaylord Diocesan Watch spokesman Dr. Richard Brenz holds the "Catechism of the Catholic Church" while speaking at a press conference at Lakeside Charlies in Cadillac on Feb. 6, 2019.

The Virgin Mary and Jesus in St. Stephen Catholic Church\'s lobby in Lake City on Jan. 15, 2019. The Cadillac News respected requests to not take photos in the church\'s sanctuary during mass or the meeting.

A tribute to Saint Stephen in St. Stephen Catholic Church\'s lobby in Lake City on Jan. 15, 2019. The Cadillac News respected requests to not take photos in the church\'s sanctuary during mass or the meeting.

Gaylord Diocesan Watch spokesman Dr. Richard Brenz holds the "Catechism of the Catholic Church" while speaking at a press conference at Lakeside Charlies in Cadillac on Feb. 6, 2019.

LAKE CITY — A Catholic priest from Cadillac was put on administrative leave by the Gaylord Diocese after the priest distributed privileged emails.

Priest Matthew Cowan also made allegations of inappropriate sexual conduct against another priest on Aug. 21, 2018, the Gaylord Diocese confirmed in an email to the Cadillac News.

The alleged incidents occurred in 2015 and did not involve a minor, Candace Neff, communications director for the diocese, said in an email.

The Diocesan Review Board, an independent body composed of laity from the diocese, met and concluded that the allegation did not reach the level of credible and substantiated sexual misconduct, Neff said.

“After being informed of the Review Board’s conclusion, Fr. Cowan offered additional information he thought supported his complaint,‘ she said. “The investigation was reopened and that investigation is ongoing.‘

Cowan was placed on administrative leave on Jan. 7 and "his permission for public ministry was withdrawn," Neff said.

The canonical action led to a parishioner meeting at St. Stephen Catholic Church in Lake City on Jan. 15 and included Bishop Steven Raica, Monsignor Francis Murphy and the Rev. Michael Janowksi along with other diocese leaders.

At the Lake City meeting, Raica said Cowan shared emails with privileged information in them that could compromise someone’s integrity.

Raica said Cowan never asked for permission to send out the privileged information included in the emails. Raica said none of the emails were sent to him.

The bishop said he eventually found out about them at Christmas Vigil.

Cowan’s complaint against the other priest was “not the basis of the Bishop’s recent canonical action,‘ Neff said.

"The bishop’s administrative decision involves what should be private and confidential issues between a bishop and one of his priests," she said. "Bishop Raica makes any such decisions only after prayerful consideration of all of the information or concerns he may have (which may include both public and confidential information) in accordance with Church Law."

At the Jan. 15 meeting Raica said his wish was to find an agreeable pathway forward and he would not talk about some of the deeper reasons for Cowan’s removal in case it jeopardized the path going forward.

“Allow me to say directly, every priest is important to me,‘ he said.

This was not a decision Raica made lightly and it took a lot of prayers, he said. Sometimes, more than not, tears accompany the decisions he has to make.

He has to consider not just individuals, but also the whole faith of the community and must do what’s good for both, he said.

Cowan shared privileged information about someone else through emails with people he wasn’t supposed to, the bishop said.

Consistent with diocesan practice, Cowan’s complaint “was reported to civil authorities prior to commencement of an independent and methodical investigation of his allegation,‘ Neff said.

Cowan was encouraged to contact local law enforcement if he desired, she said.

It is not clear if the allegations were ever forwarded to police.

Following a Freedom of Information Act request, the Petoskey Department of Public Safety stated it had no records of such an incident regarding the person Cowan made allegations toward.

The Cadillac News reached out to Emmet County Sheriff Peter Wallin, who said he had no complaints on the person Cowan has made allegations toward.

Following multiple Freedom of Information Act requests, the Cadillac News learned that Emmet County Prosecutor James Linderman received three letters from Robert Westerman, an attorney for the Diocese of Gaylord, dated Oct. 30, 2018, Jan. 2 and Jan. 14. The redacted records that were released do not include names of individuals.

On Jan. 22, Linderman responded to Westerman and said his office does not investigate allegations of criminal activity but refers such complaints to a law enforcement agency for investigation, according to the letter released in the FOIA request.

“Based on this fact, please inform any victim filing a complaint with your office regarding allegations of criminal activity by a party associated with the Diocese that they need to contact an appropriate law enforcement agency if they want to start a criminal investigation of their matter,‘ Linderman wrote to Westerman.

The case is with the Attorney General’s Office right now, Raica said at the Jan. 15 meeting.

When the Cadillac News reached out to the Attorney General’s Office, Communications Director Kelly Rossman-McKinney said they were not able to release names due to the existence of the open investigation and they have an entire team of people dedicated to investigating the allegations of sexual abuse in Michigan’s seven Catholic dioceses.

Any victims or anyone who knows a victim is urged to contact the state’s team of law enforcement investigators at the anonymous tip line 844-324-3374.

“We want to remind people that this is a statewide investigation conducted by certified law enforcement officials and we have asked the Dioceses to hold off on their internal review processes until our investigation has concluded so victims are encouraged to report directly to our office,‘ Rossman-McKinney said in an email.

Cadillac parishioners Richard Brenz and Martin Dubravec are part of a new organization called the Gaylord Diocesan Watch, which held a press conference Wednesday in Cadillac.

Brenz, the spokesperson for the group, said they feel like in the Catholic church parishioners “pray, pay and obey‘ but this is a chance for them to say they won’t just do that anymore, they will be more active stepping up for those oppressed by abuse.

The group doesn’t want to be confrontational and wants to help Raica be more transparent. The church needs to be reached by the “sanitizing light of the sun,‘ Brenz said.

“We want transparency,‘ he said. “We’re adults, don’t hide things from us.‘

He said one thing that wasn’t brought up at the meeting but should be mentioned is that if Cowan is reassigned and someone hears he was on administrative leave, it will follow him “like a ghost‘ and people might be suspicious he committed abuse when he didn’t.

Dubravec said he’s concerned there may be an issue of sexual harassment that’s being covered up.

He said the investigation and the process by which the allegations were handled are of concern to many.

“I question whether that could be an attempt to really muzzle someone,‘ he said.

Dubravec said he believes Cowan felt compelled to release the emails in order to make the public aware of the situation.

He said he talked to Cowan briefly after the suspension, and the priest was obviously shaken and upset about all of this.

The severity of the punishment of the priest to take them out of their position for sending an email seems very questionable, Dubravec said.

Brenz said Cowan is a wonderful and loving priest and “we’d like to see him back as quickly as possible.‘

Raica said he plans to have a replacement for Cowan by spring.

In the meantime, Raica has appointed Murphy, a senior priest of the diocese, former pastor to four parishes in the Cadillac area and previous Vicar General of the Diocese of Gaylord, to assist Janowski in providing pastoral and sacramental care, Neff said.

Neff said the diocese is unable to make any further comment at this time.

Cowan was ordained in 2014 and has been a priest for almost five years. He is currently in the Petoskey area with relatives.

The Cadillac News attempted to contact the priest Cowan made allegations toward but was unsuccessful.