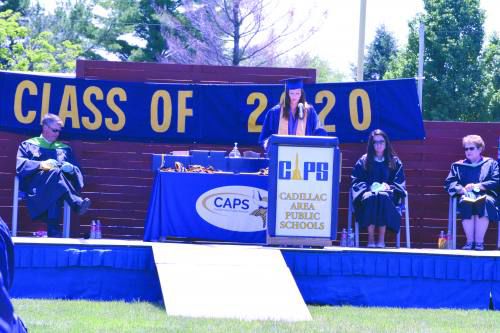 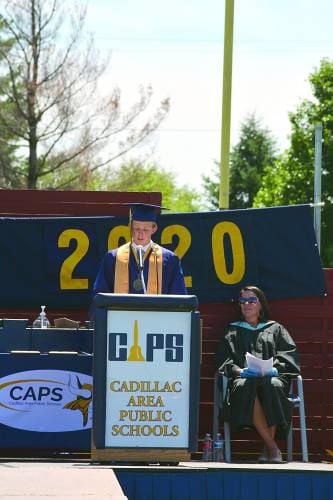 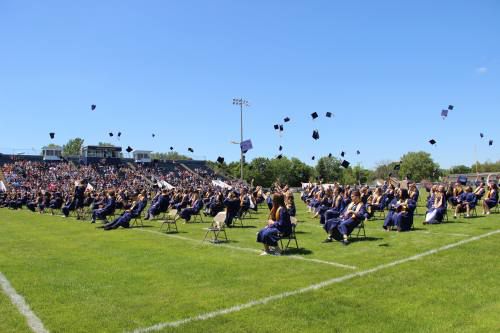 CADILLAC — Their moment in the sun finally came, almost a month later than originally planned.

Cadillac High School held commencement ceremonies for the Class of 2020 Sunday at Veterans Memorial Stadium, giving closure to more than 150 graduates who never got all the traditional celebrations around being a senior due to the COVID-19 pandemic.

For Cadillac’s seniors, it meant no senior breakfast, no in-person awards ceremonies, no Junior/Senior Banquet, no counting down to their final day in May and all of the other things that come with the end of your high school time.

Their last day of school ended up being March 13 as the state transitioned to online learning for the remainder of the academic year.

As time has gone on, those wounds have healed a little bit as they begin to understand the bigger picture with the next chapter of their lives.

“It was pretty hard,‘ Cadillac High School senior Abraham Apfel said. “All of the stuff you’re looking forward to. I missed the countdown to the final day.

Sunday’s commencement brought all of that together and let them celebrate as a class one last time.

“I’m just really happy that today was able to go slightly normal,‘ Apfel said. “It was great to see everyone one last time and be able to walk across the stage.‘

Apfel gave one of two Senior Commemorative speeches and talked about the challenges his class faced. His parting message was to celebrate the time they had together.

“I wanted us to remember the other three and a half years we had together because those were great,‘ he said. “The end wasn’t what we wanted but I think we made the best of what it was.‘

Cadillac High School principal Konrad Molter said Sunday’s commencement was important, given what the Class of 2020 has gone through and what we’re still facing in regards to the pandemic.

“I think this was closure,‘ Molter said. “It comes down to that. These kids deserve some type of closure and they didn’t get it this year as was quickly articulated today that March 13 was their last day together and they didn’t know it.

“It was ripped from underneath them. You could almost see it on their faces today that this was a good day to have some closure.‘

Molter and his staff spent the last six weeks putting together plans to give the seniors some sense of normalcy.

Plans ranged from moving graduation to other venues to being completely virtual but it finally worked out.

“We really put our brains around thinking how can we pull this off and I think we learned a lot from it,‘ Molter said. “We started a task force six weeks ago and kept working on being creative with what could we do. We talked about Caberfae, we talked about Interlochen but with the delay on the track, we were able to be here.

“When the governor said we could have outside gatherings with up to 500 people, she included graduations in that. That was big.‘

It wasn’t totally normal as Pomp and Circumstance was recorded by the Cadillac High School Honors Choir and played as graduates took their seats. The choir also recorded a rendition of Billy Joel’s Longest Time that played over the speakers.

Spectators were asked to practice social distancing in the bleachers and graduates’ seats were placed six feet apart on the field.

“It was seamless for the most part,‘ Molter said. “We still had some constraints put on the ceremony like not being able to have the choir here, standing inches from each other.

“I think we did a good job and the community really stepped up.‘