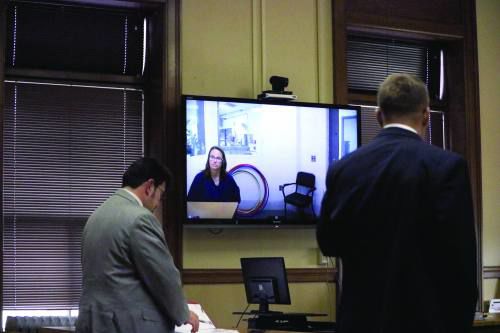 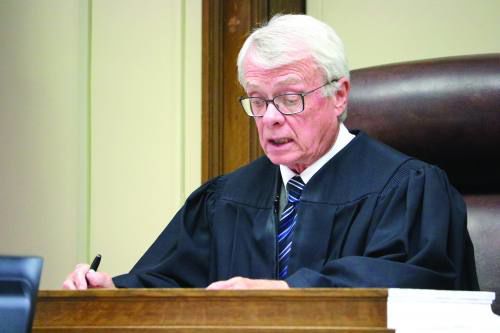 28th Circuit Court Judge William Fagerman goes over some details of future proceedings during the arraignment of Kelly Sue MacDonald via video from Huron Valley Women\'s Correctional Facility in Ypsilanti Thursday in Cadillac. 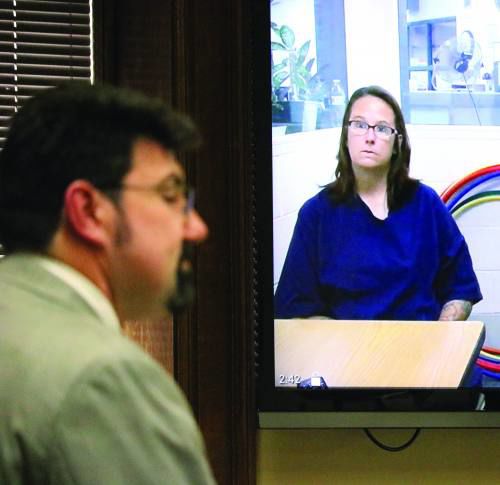 28th Circuit Court Judge William Fagerman goes over some details of future proceedings during the arraignment of Kelly Sue MacDonald via video from Huron Valley Women\'s Correctional Facility in Ypsilanti Thursday in Cadillac.

CADILLAC — A 42-year-old Cadillac woman was arraigned Thursday in 28th Circuit Court from a Ypsilanti prison on charges alleging she delivered drugs leading to the overdose death of a Cadillac man.

Kelly Sue MacDonald stood mute to seven felonies including charges of delivery of a mixture containing heroin and fentanyl causing death and conspiracy to deliver heroin less than 50 grams. She also was charged Thursday with possession of methamphetamine, possession of heroin less than 25 grams, possession of a controlled substance, a mixture containing heroin and fentanyl, less than 25 grams, use of methamphetamine second or subsequent offense and use of heroin second or subsequent offense. All the charges stem from her connection with an incident on March 31 in Cadillac.

A not guilty plea was entered on her behalf by her legal counsel Patrick Cherry.

A habitual offender fourth offense notice also was added to five of the charges and if convicted she faces up to life in prison. A $500,000 cash or surety bond was continued by the court.

When asked, Cherry had no comment while Wexford County Prosecutor Jason Elmore only said the case involves serious allegations and his office continues to prepare for trial.

Thursday’s proceedings in circuit court also determined a month would be needed for both prosecution and the defense to file motions. It also was agreed to schedule a four-day trial.

On March 31, Cadillac police along with Traverse Narcotics Team detectives were alerted of a possible overdose in a Cadillac motel, according to a TNT press release.

Detectives said when officers arrived, they found Adam Leyko, 30, unresponsive from a suspected drug overdose. He was pronounced dead by medical responders. An autopsy was requested and completed at the request of the medical examiner, which confirmed the victim died because of a drug overdose.

Police said during the investigation, they also were able to determine MacDonald had occupied the room where the victim was found. Surveillance video from the hotel and witness statements also indicated she was on the scene just before officers arrived, according to police.

MacDonald was arrested later that day on a traffic stop for outstanding warrants and additional charges unrelated to the death of Leyko, according to TNT. At the time of her arrest, MacDonald produced a needle/syringe containing an unknown fluid. MacDonald refused to exit the vehicle she was in as ordered by police and refused to drop the needle, according to police at the time of MacDonald’s arrest.

Assisted by the male driver, Michigan State Police troopers attempted to take physical control of MacDonald as it became apparent she intended to harm/inject herself with the syringe, according to the release by police.

As the struggle continued, police said MacDonald consumed a portion of the substance orally. She quickly became unresponsive and troopers administered two doses of Narcan, with a third being administered by a backup officer, according to police. EMS personnel transported MacDonald to Munson Healthcare Cadillac Hospital where she was treated for an overdose, police said.

In June, she was sentenced to between 16 months to two years in prison with 85 days credited for guilty pleas to two counts of police officer assault, resist or obstruct for her actions during that traffic stop.

Several interviews were conducted by TNT regarding Leyko’s death. During the execution of a search warrant related to the investigation, evidence suggested Leyko had contacted MacDonald several times in the days leading up to his death to get heroin, according to police.

Police said the evidence also suggested MacDonald was able to acquire heroin from Corry Sisson. It is alleged MacDonald and Leyko rented a room at the Sun ’n Snow Motel on March 30 where the drugs were used.

Once the investigation was completed, the case was submitted to the Wexford County Prosecutor’s Office for review and warrants were authorized for charges against MacDonald and Sisson. Sisson was arraigned on July 29 for the delivery of a controlled substance related to the incident.

Sisson pleaded guilty earlier this month to one count of possession of heroin for his connection with an incident on March 31 in Springville Township. As part of the plea, a charge of delivery of heroin less than 50 grams second or subsequent offense will be dismissed at sentencing.

Also as part of the agreement, Sisson is to provide truthful testimony against any co-defendants and there will not be any additional charges filed regarding possession of a firearm by a felon, any stolen firearms alleged or delivery of narcotic causing death.

The charges are merely accusations and not evidence of guilt. MacDonald is presumed innocent unless and until proven guilty in a court of law. The prosecution has the burden of proving guilt beyond a reasonable doubt.