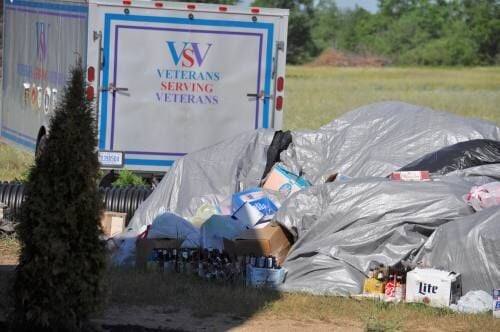 Volunteers with the Veterans Serving Veterans park collected thousands of cans they were forced to store in a pile covered by a tarp and inside a large trailer after they ran into difficulties cashing them in at local stores. 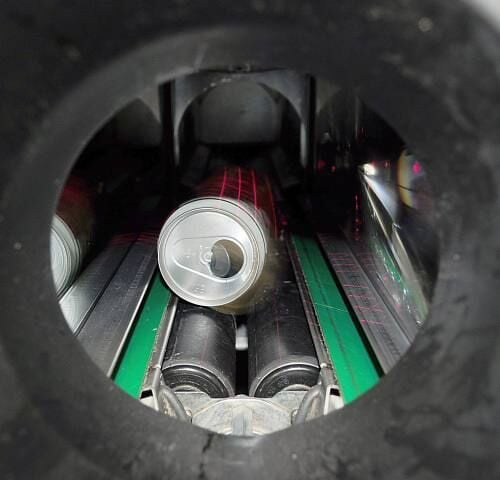 Volunteers with the Veterans Serving Veterans park collected thousands of cans they were forced to store in a pile covered by a tarp and inside a large trailer after they ran into difficulties cashing them in at local stores.

CADILLAC — For weeks, tens of thousands of cans and bottles collected from the community by the Veterans Serving Veterans park sat covered by a tarp.

Volunteers made several attempts to cash the cans and bottles in to bolster the park's dwindling revenues following the cancellation of all their major fundraising events this summer but complications thwarted each attempt.

Park organizer Roger Bandeen said the first time they attempted to return the cans, they were told that there was a $20 limit per person on returned cans and bottles. He said they tried to come to some sort of agreement with the store management to return their cans at a separate time from the rest of the public to avoid inconveniencing other customers but were told that this wasn't possible.

The second time they attempted to bring the cans back — this time with a large number of volunteers to bypass the $20-per-person restriction — the can collection facility was closed because they were at capacity for returnables.

Bandeen said they also tried taking the cans to one of the area's other returnable facilities but discovered that this facility didn't take some major brands.

"It's been really frustrating," Bandeen said.

Fortunately, over the course of the last couple of weeks, Bandeen said they've slowly been able to cash in the majority of the cans and bottles, resulting in around $5,000 for the nonprofit group.

"The community has been great," said Bandeen, who added they are planning to hold another bottle drive on Aug. 22 from 9 a.m. to 5 p.m. to raise money toward the relocation of the Octagonal building at the Wexford County fairgrounds to the VSV park on 41 Road.

VSV isn't the only organization that's run into problems returning cans and bottles collected from the community — Wexford-Osceola Habitat For Humanity is another non-profit that's been affected.

"There's a lot of money just sitting out there," Bandeen said.

In 1976, Michigan adopted a bottle deposit law that requires a 10 cent charge be applied to carbonated beverages such as soda and beer. The law was championed by the Michigan United Conservation Clubs and was intended to reduce the amount of litter and promote recycling in the state.

Ron Leix, deputy public information officer with the Michigan Department of Treasury, said when bottles and cans are returned, the individual gets their deposit back for the containers. If someone recycles their returnables at the curb or doesn't cash in their returnables for whatever reason, state law outlines that 75% of the previously-collected bottle deposit money is automatically deposited into the state's Cleanup and Redevelopment Trust Fund and 25% is returned to the retailers.

In June, the Treasury issued a notice regarding phased re-establishment of Michigan’s bottle deposit return program following several weeks when stores didn't have to accept returnables as a safety measure to control the spread of COVID-19. The notice applied to retailers with bottle return facilities located at the front of the store or housed in a separate area and serviced exclusively by reverse vending machines requiring minimal or no person-to-person contact.

In the Cadillac area, that means options are quite limited at this time as to where people can bring their cans and bottles.

Kerrin O'Brien, executive director of the Michigan Recycling Coalition, said while the complications caused by COVID-19 have exacerbated the problems people have returning their cans and bottles, those problems have existed for a long time.

Some groups such as the Boy Scouts get around the complications of the state's bottle return law by taking aluminum cans they collect directly to recycling centers, although doing this means they don't get the deposit on plastic bottles, O'Brien said.

There are several "spark points" in the bottle return law that seem to come up on a regular basis and prompt discussions about changing the law.

"'This comes up every single year," O'Brien said. "It's a constant discussion."

One of the more controversial aspects of the law is that retailers aren't required to take back any brands they don't themselves sell, which is a restriction that Bandeen and VSV recently ran into.

Another shortcoming of the law that recycling advocates often bring up is the fact that it doesn't apply to any sort of water bottles.

O'Brien said with society turning more and more to single-serving disposable containers, figuring out a way to expand the bottle return law or make it universal to all containers is something they've been pushing.

On the retail side, being responsible for collecting used containers has been a bone of contention from the beginning.

Amy Drumm, vice president of government affairs for the Michigan Retailers Association, said most retailers feel that it doesn't make sense to bring dirty bottles back into clean stores.

Not only does it cost a lot of money to pay employees to handle and sort through cans (to prevent deposit fraud), but the expense of maintaining clean facilities, especially right now, is incredibly burdensome.

While the bottle deposit law sends 25% of revenues back to retailers to defray some of these costs, Drumm said that doesn't even come close to covering their expenses.

"It's a huge drain on resources and takes a tremendous amount of time," Drumm said. "Retailers have to sort through thousands and thousands of bottles, and when you think about everything that can be put inside an empty bottle, or if someone with COVID just finished drinking out of one ... many associates don't want to touch those surfaces and there's a real concern about that."

Another wrinkle adding further complexity to the issue is how stores get rid of the cans they collect. While some work directly with suppliers that come and pick up the empties, about 50% of retailers in Michigan contract through third parties to pick up and process the cans and bottles.

O'Brien said this system can present logistical challenges and prevent stores from being able to accept more cans and bottles until the third party is available to pick them up.

At the beginning of the COVID-19 shutdown in Michigan, Drumm said they warned the state that non-profit groups could be particularly affected by delays in bringing cans back at a time when stores are merely trying to keep up with the larger flow of returnables.

When stores reopened their return facilities, Drumm said they experienced an instant crush of customers but that has since leveled off to some degree.

"It's more of a constant flow now," Drumm said.

While that has allowed groups such as VSV to begin bringing their cans back, Drumm said she doesn't think the law is achieving what it originally was intended for, especially when one considers how much recyclable material ends up in Michigan landfills, in the woods or on the sides of roads.

"Recycling needs to be convenient and easy for people," said Drumm, who believes a single-stream recycling program funded by the state would be far more effective than the current system, and could be partially funded by the valuable aluminum cans that currently have a 10 cent deposit.

"It's a fine line to walk," said O'Brien with the Michigan Recycling Coalition. "Retailers say they're not in the waste collection business. But we do need to figure out a solution to this."