Skip to main content
You are the owner of this article.
Edit Article Add New Article
You have permission to edit this article.
Edit
Login
Home
News
Sports
Entertainment
Community
Obituaries
Classifieds
Contact Us
Today’s Paper
Publications
Other
1 of 5 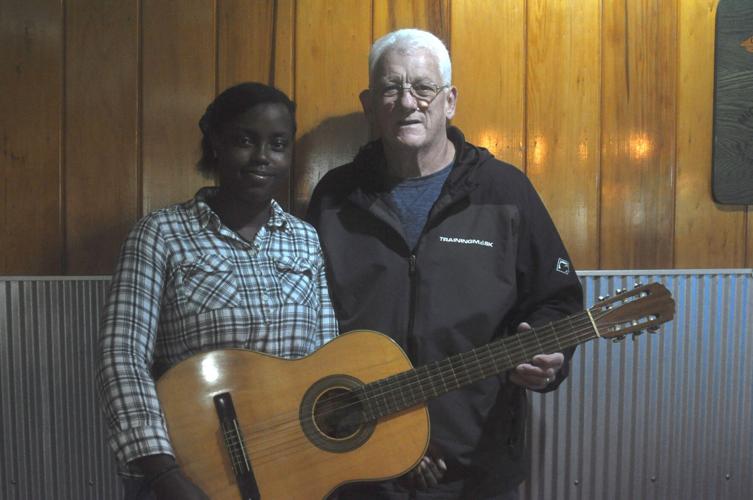 Pictured from left are Raven Weaver and Dan Danford with the guitar that originally came from Weaver’s home country, Haiti. 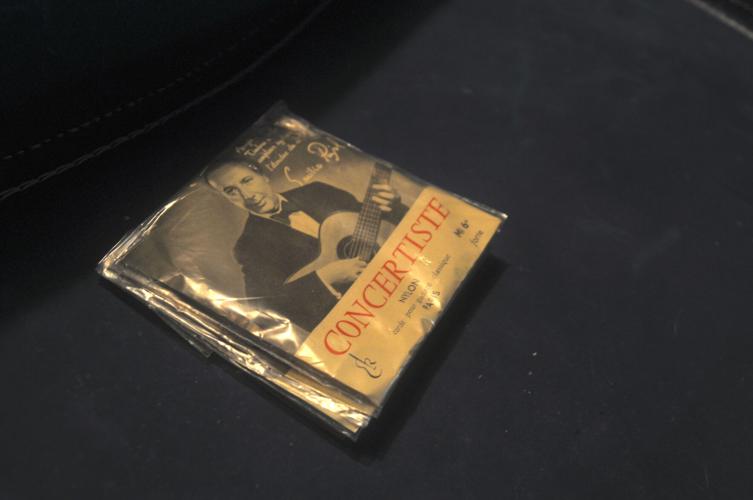 Pictured are some of the original cat gut guitar strings that came with the Vicente Tatay, S.R.C. flamenco guitar. 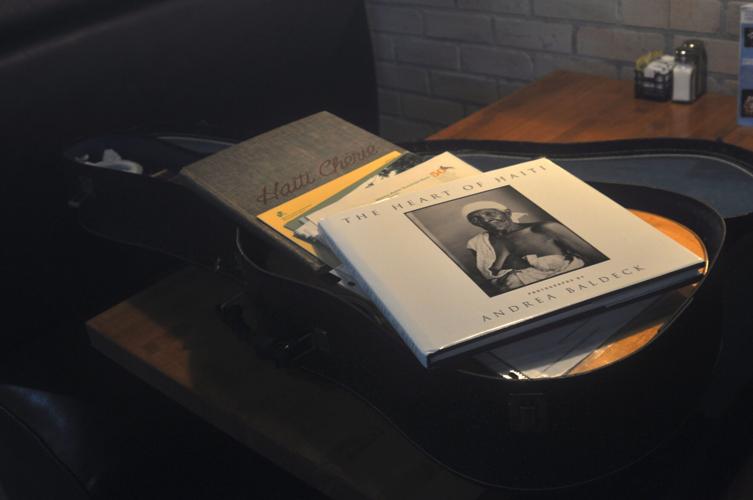 Dr. Nora Chang gave the guitar to Dan Danford in 2006, under the condition that he put new strings on the instrument and play it for her on a regular basis. Along with the guitar, Chang gave Danford several books related to Haiti and the Albert Schweitzer hospital. 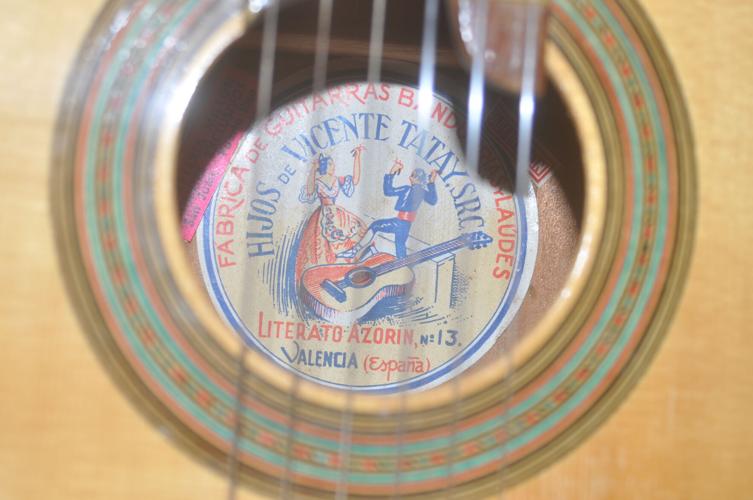 Pictured is a sticker inside the hollow body of the guitar detailing its model and what company produced the instrument. 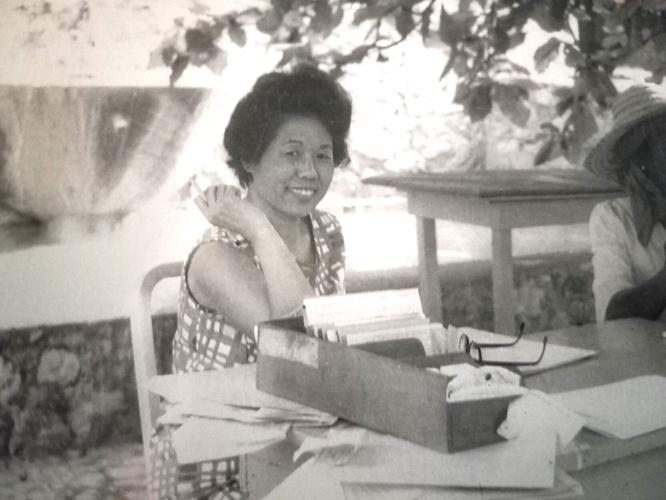 Pictured is Dr. Nora Chang when she volunteered in Haiti in the late 1950s.

Pictured from left are Raven Weaver and Dan Danford with the guitar that originally came from Weaver’s home country, Haiti.

Pictured are some of the original cat gut guitar strings that came with the Vicente Tatay, S.R.C. flamenco guitar.

Dr. Nora Chang gave the guitar to Dan Danford in 2006, under the condition that he put new strings on the instrument and play it for her on a regular basis. Along with the guitar, Chang gave Danford several books related to Haiti and the Albert Schweitzer hospital.

Pictured is a sticker inside the hollow body of the guitar detailing its model and what company produced the instrument.

Pictured is Dr. Nora Chang when she volunteered in Haiti in the late 1950s.

CADILLAC — “May the circle be unbroken.”

Dan Danford choked up as he spoke the words of a text message he recently sent to 23-year-old Raven Weaver, who was born in Haiti but has lived in Northern Michigan most of her life.

“She wrote back ‘thank you,’ and sent a heart,” said Danford, who proceeded to apologize for the emotions that were welling up within him.

Danford on Tuesday discussed the text message exchange at Burke’s Waterfront restaurant in Cadillac West, and Weaver was sitting across the table from him. This was only the third time that Weaver and Danford had met in person and while the two were essentially still strangers to each other, they nonetheless shared an intimate connection.

Recently, Weaver attended a gathering in Kingsley where a number of people were playing bluegrass, country and rock ‘n roll music. Danford, who has played in bands for many years, attended the gathering with his wife and noticed Weaver taking a particular interest in the scene.

“I like a huge variety of music,” said Weaver, who lives in Tustin and works at Lighthouse Rehabilitation Center in Traverse City, where she is an aid for patients who have suffered brain and spinal cord injuries.

At one point in the evening, the pair struck up a conversation and Weaver told Danford how she was adopted at 10 months old from an orphanage in Haiti. Weaver said her adoptive parents were volunteering at the orphanage at the time and adopted both her and her twin brother, Jesse, who today lives in Mount Pleasant. The family also consists of adopted children from Liberia and Africa.

From the moment he met Weaver, Danford said he noticed something about her that was quite endearing.

“She’s the type of person that smiles and captures you,” said Danford, who added that when he found out that she originally was from Haiti, he immediately saw the chance encounter as an opportunity to pass on a family heirloom to someone entirely fitting to receive it.

The heirloom is a flamenco guitar produced by Vicente Tatay, S.R.C., a guitar company that did business through the 1960s that originally was based out of Valencia, Spain.

The guitar was given to Danford by the late Dr. Nora Chang, who worked with his mother at Mercy Hospital in Cadillac, now Munson Healthcare Cadillac Hospital.

Chang herself received the guitar while volunteering at the Albert Schweitzer hospital in Haiti in the late 1950s, when the country’s population was being devastated by malaria and other deadly diseases. The hospital’s founders. Dr. Larimer Mellon and his wife, Gwen, obtained the guitar in Puerto Rico on a retreat and presented the instrument to Chang as a gift for watching over the hospital in their stead.

“They asked her if there was anything she wanted while they were gone,” Danford said. “And she said, ‘just something fun.’” Over the years, she learned how to play a handful of chords on the guitar, which she brought out from time to time.

After volunteering in Haiti, Chang served as a staff physician at a number of hospitals in the U.S., China and Canada before joining the pediatric staff at Mercy Hospital in 1975.

Danford’s mother worked with Chang at Mercy Hospital from 2000 to 2005 and during that time, the two developed a close relationship. Danford said Chang trusted his mother’s judgment and on one occasion, asked her to help tell the parents of an infant that the child didn’t have long to live; he said Chang relied on his mother to deliver the bad news, as her English was broken and she wanted to make sure the right words were spoken.

Chang gave the guitar to Danford in 2006, under the condition that he put new strings on the instrument and play it for her on a regular basis. Along with the guitar, Chang gave Danford several books related to Haiti and the Albert Schweitzer hospital.

“To dear Danny,” Chang wrote in one of the books that she gave to Danford, along with the guitar. “Please enjoy the photo book and the guitar — the gift from Dr. and Mrs. Mellon to me.”

Soon after that, Danford contacted Chang’s son to give back the guitar, as it was his feeling that the instrument should remain in their family. When he met up with Chang’s son, however, Danford said he expressed gratitude for the gesture but added that since the guitar was a gift, it no longer belonged to his family and that Danford should keep it. He said this was a Chinese custom.

So Danford kept the guitar and played it periodically, although he was always on the lookout to pass it on in a way that would do justice to the memory of Chang and the 17,000-mile journey the instrument had taken to get to Northern Michigan.

Passing the guitar on to Weaver was a way of bring the story “full circle,” Danford said.

“My mom (who has passed away) would be very upset if I didn’t get it to someone that would appreciate it like I would,” Danford said. “So would Dr. Chang.”

At first, Weaver said she was hesitant to accept such a treasured item.

“I kept asking him, ‘are you sure?’” Weaver said. “I thought it was very special.”

Haiti also holds a special place in Weaver’s heart, and in 2018, she returned to her home country with her adoptive family. While there, her intention was to volunteer at the orphanage where she was taken by her biological father; her biological mother passed away a few days after delivering Weaver and her brother. Her name at birth was Jessica Melor.

“I just feel very drawn to it,” Weaver said about the orphanage, “maybe to see how it was when I was there.”

Although she wasn’t able to volunteer at the orphanage during her visit because the area was deemed too dangerous, she was able to get in touch with her biological father through FaceTime. She spoke to him through a translator, as he didn’t speak English and she didn’t speak creole.

Weaver said she appreciates the “full-circle” symbolism of the guitar being given to her. She added that she’s also been inspired by Danford’s kindness.

“It makes me want to learn to play,” said Weaver, who intends to learn along with her boyfriend, who also plays.

“I sleep well at night,” Danford said about his decision to pass on the guitar to Weaver. “I’m looking forward to both of them joining us at the (Kingsley) gathering sometime.”