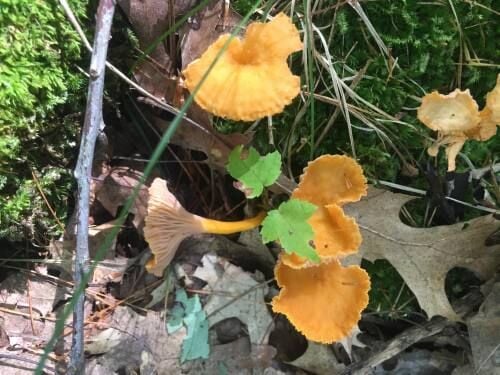 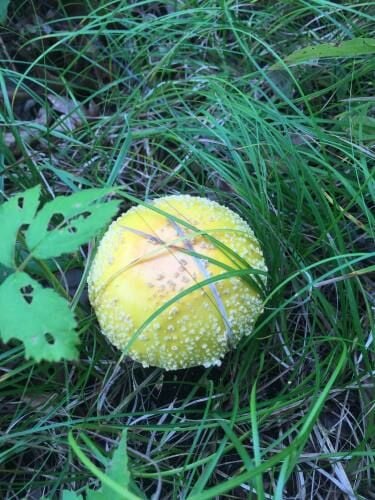 The easily recognizable fly agric (Amunita muscaria) is found throughout the world. 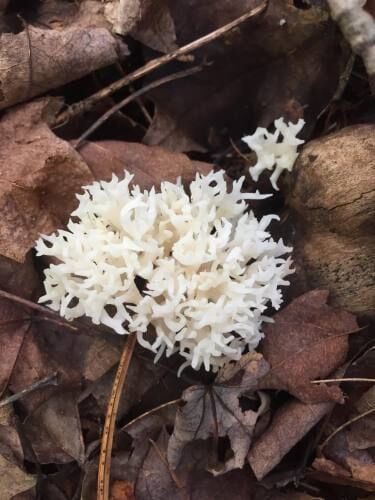 The white coral (Clavulina cristata) fungus lives up to its name. It looks more like coral than a fungus. 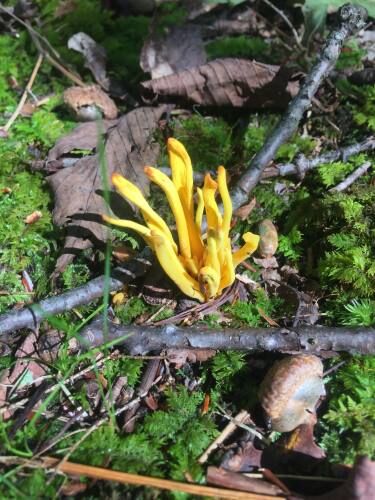 The easily recognizable fly agric (Amunita muscaria) is found throughout the world.

The white coral (Clavulina cristata) fungus lives up to its name. It looks more like coral than a fungus.

Fall is the perfect time for hikes in our beautiful forests. The brilliant colors of the forest canopy are a spectacle that everyone can appreciate. The change in seasons signals many plants and animals to make their final preparations for the long winter to come. Many plants have finished flowering and the skies are filled with the familiar v-formations of migrating geese.

In September, I took the opportunity to enjoy the fall weather and explored a section of the famed North Country Trail near Baldwin, MI. This 4,600-mile trail stretches from Vermont to North Dakota. 1,150 miles of the trail fall within Michigan. Being September, the leaves were just beginning to change. As beautiful as they were, it was not the trees that caught my attention that day but instead it was the multitude of brilliantly colored and strangely shaped mushrooms on the forest floor. These mushrooms were the result of fungi that had spent the spring and summer months quietly living within the decaying organic matter in our forests.

Most Michiganders have probably heard of the popular morel mushroom- a delicious springtime treat found throughout Michigan. But I suspect few are aware of the array of fungi that produce mushrooms in our forests as the temperatures cool and the days become shorter. According to Midwest American Mycological Information, Michigan is home to approximately 2,500 species of mushrooms. 50 species are known to be poisonous while 60-100 species are considered to be safe for human consumption. That being said, NEVER consume a mushroom without being certain that it is safe. Many edible species have look-a-likes that can be poisonous to humans.

Fungi go through a complex lifecycle that remains out of sight until they reach the point of producing the mushrooms that we see in our forests. Fungi begin life as microscopic spores released from mature mushrooms. If they land on suitable substrate they will germinate and form fine filaments called hyphae. When two compatible hyphae meet, they form branching root-like structures called mycelium in a process similar to fertilization. Similar to roots, mycelium function as the feeding structure for the mushroom. The mycelium grow and mature within the material it is feeding on. This material can range from wood, leaves, or soil depending on the species of fungi. Once conditions are favorable, the growing mycelium will produce a mushroom, otherwise known as a fruitbody. The fruitbody will produce spores to seed the next generation.

This complex process is not just responsible for producing tasty and colorful mushrooms. The life cycle of fungi provides important ecological functions. As decomposers, they return the nutrients from decaying plants and animals back to the soil. Some fungi form symbiotic relationships with other organisms. Many plants rely on mycorrhizal fungi to absorb nutrients from the soil. In turn, the plants provide the fungi with carbon needed to build tissue. Fungi also provide a food source for wildlife.

As I witnessed on my forest hike, the diversity of fungi and the variety of mushrooms they produce is extensive. Brown and red artist’s conks (Fomes applanatus), shaped like dinner plates grow on the outside of dying hardwood trees. Golden chanterelles (Cantharellus cibarius), a very popular edible mushroom grow on the soil in pine and hardwood stands. The iconic fly agric mushroom (Amunita muscaria) adds a shocking touch of color to the forest landscape. Still, other species such as white coral fungus (Clavulina cristata) and yellow club fungus (Clavulinopsis spp.) look like they belong on a coral reef instead of the forest floor. The diversity is endless.

The next time you get the chance to take a stroll outdoors, take a few extra moments to check out some the mushrooms you come across. As always, do not touch or eat wild mushrooms without first making completely certain they are safe. If in doubt, just leave it alone.

If you’re interested in learning more about Michigan’s mushrooms or would like additional information, check out the Midwest American Mycological Information’s website at midwestmycology.org. The Audubon Society Field Guide to North American Mushrooms is an excellent field guide for the mushroom enthusiast. As always, be sure to contact your local conservation district for any information regarding natural resources. We are eager to help.

Alex Svoboda is the Michigan Agriculture Environmental Assurance (MAEAP) Technician for the Osceola-Lake Conservation District, located in Reed City, MI. He is responsible for Osceola, Clare, and the eastern half of Lake County. For more information contact Alex by phone at 231-465-8012, by email at alex.svoboda@macd.org, or stop by the Osceola-Lake Conservation District office located at 138 W Upton Ave., Reed City, MI 49677.