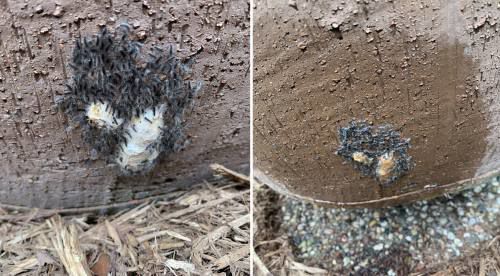 Spraying hatchlings on an egg mass in early spring, before (left) and after (right). 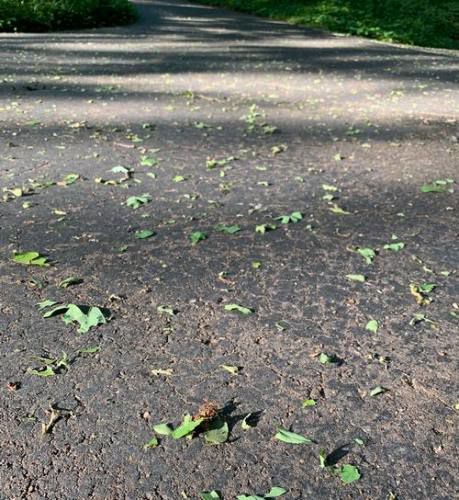 Small pieces of leaves rain down with gypsy moth frass during a heavy outbreak. 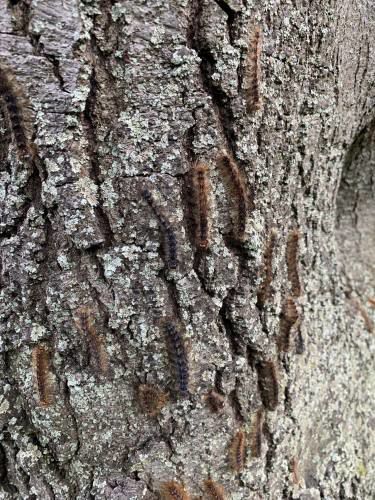 Hundreds of dying gypsy moth caterpillars end up face down as Entomophaga grows in their bodies. 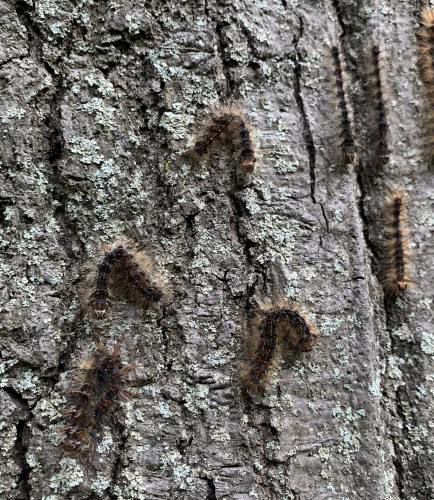 Caterpillars infected with a virus look like an upside down “V‘. 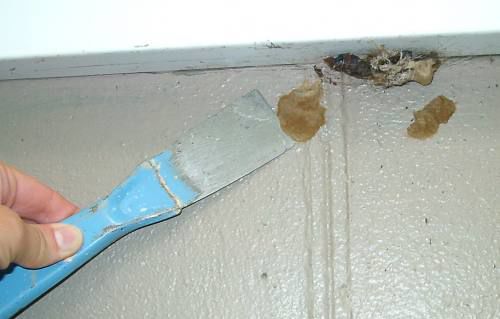 Spraying hatchlings on an egg mass in early spring, before (left) and after (right).

Small pieces of leaves rain down with gypsy moth frass during a heavy outbreak.

Hundreds of dying gypsy moth caterpillars end up face down as Entomophaga grows in their bodies.

Caterpillars infected with a virus look like an upside down “V‘.

Outbreaks of gypsy moth caterpillars, often referred to as “hotspots‘, in Michigan periodically plague neighborhoods and homes nestled in a wooded area. Some Michigan cities and townships have continued applying Bacillus thuringiensis (Bt) sprays each spring since the 1980s to reduce the effects of feeding, particularly as a nuisance to home dwellings. When gypsy moth populations are high, tiny pellets of green “frass‘ (gypsy moth excrement) cover dwellings, driveways, sidewalks and cars. Once wet with rainfall or irrigation water, the pellets stain everything they touch. Buildup on rooftops is not easy to remove and will result in darkly stained droplets of water that continue staining long after gypsy moth feeding ceases.

Rises in gypsy moth hotspots have been linked to environmental conditions (dry springs) that are unfavorable to a gypsy moth natural enemy known as Entomophaga maimaiga. This fungus is favored by ample spring moisture that allows resting spores in the soil around the base of trees that were infested with caterpillars the previous summer to germinate and infect young caterpillars as they traverse across the soil and up the tree trunks.

The pathogen develops rapidly inside the body of early instars (when the caterpillars are small), causing them to die within ten days. Their body is converted into fungus tissue, becoming a mushroom inside the caterpillar skin. Under moist conditions, these little mushrooms up in the tree canopy sporulate, raining thousands of infective spores down through the tree. Other caterpillars become infected after bumping into these sticky spores.

If the caterpillars are in the last two or three stages of development (fourth to sixth instar, over one inch long), the fungus develops differently, filling the caterpillar with fungal tissue containing resting spores. When these large caterpillars become infected, their behavior is altered by the fungus and they crawl downward on the tree trunk, where they usually die within six feet of the ground, all facing the same direction, head down.

In some areas of Michigan in 2019, Entomophaga caused local gypsy moth populations to come to a screeching halt mid-way through the summer. One landowner noted that their tree trunks looked “furry‘ with all the dead and dying caterpillars on the trunk. Fungal spores in the cadavers of dead caterpillars overwinter as resting spores, which germinate the next spring and start the cycle all over again.

Sites in Michigan where gypsy moth feeding was heavy will result in thousands of egg masses shortly after the adult moths mate during July. Homeowners can make a dent in the number of feeding caterpillars by removing these egg masses with a putty knife or scraping tool and placing them into warm, soapy water.

Each mass can contain up to 1,000 eggs, which means 1,000 hungry caterpillars hatching the following spring. Egg masses can be found on homes, outdoor furniture, inside the wheel wells of campers and play equipment. I scraped dozens of masses off my ornamental flowerpots, outside and inside, when disassembling them in the fall.

When scraping egg masses, take care not to shatter the crumbly egg mass, as the tiny eggs will just float to the ground, not allowing them to be killed. A flat index card or plastic container can be used to funnel the cluster as it drops away from its point of attachment. If you wait until spring, watch the egg masses until hatchlings cluster on the old egg mass while their bodies acclimate to their new surroundings. Using a spray bottle with soapy water, soak them before they have a chance to disperse into the tree canopy.

Thanks to Entomophaga, most people in Michigan will not see any gypsy defoliation of oak, poplar or birch trees in their yards. However, we will continue to see small hotspots where gypsy moth increases to the point where defoliation is visible for one or two years before Entomophaga kicks in. This is most likely to happen where gypsy moth has not been active for several years and the number of infective spores in the soil has declined to very low levels, or where it has been very dry in May and June for a couple of years, limiting sporulation of the fungus.

Most of the time, Entomophaga appears by the time people notice some defoliation of their trees from gypsy moth caterpillars, and the population collapses again. Occasionally, caterpillars devour more than 50% of the tree canopy before the collapse begins. Tree health is not affected by less than 50% defoliation, so if you can tolerate caterpillars crawling around in June, there is not much to worry about.