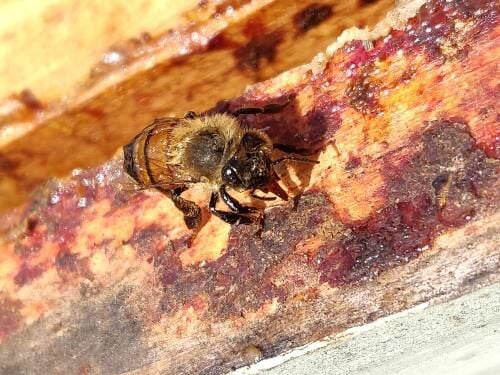 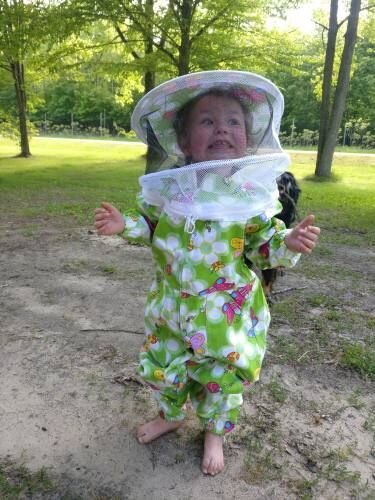 Elainna Smith from Falmouth starting her journey to become a beekeeper. 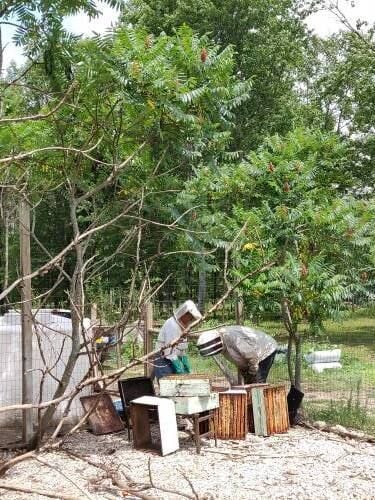 Doug and Sonya Jones of Moonlit Farm in Falmouth working to harvest some of 2020\'s honey. 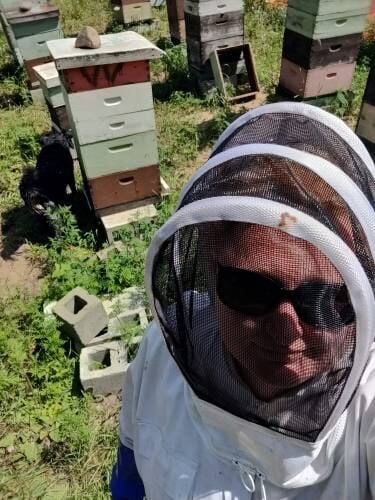 Tiffany Jones preparing for work with a selfie. 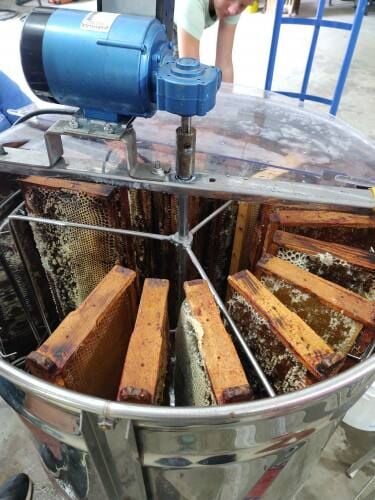 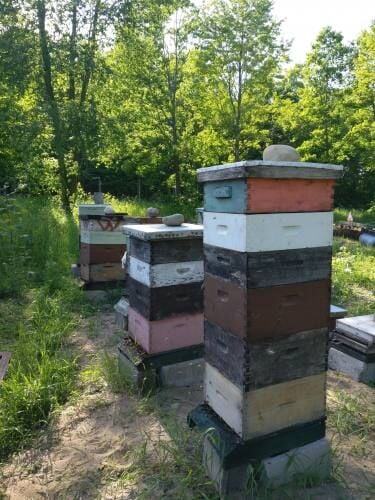 Elainna Smith from Falmouth starting her journey to become a beekeeper.

Doug and Sonya Jones of Moonlit Farm in Falmouth working to harvest some of 2020\'s honey.

Tiffany Jones preparing for work with a selfie.

Humans originally obtained their honey through wild harvest. A cave painting located in Valencia, Spain, depicts honey harvesting dates back 7,000 years. But it is thought that honey and wax collection dates back about 10,000 years. Modern-day beekeeping is a long-held tradition dating back to the eighteenth century when European changed beekeeping by using moveable comb hives. Before that, the colony of bees would be destroyed to collect the honey.

Beekeeping today contributes around $20 billion in value to U.S. crop production according to the American Beekeeping Federation. Some crops, like blueberries and cherries, are 90% dependent on honey bees. Honeybees are so important that one out of every three bites of food is linked to honeybee pollination.

The vertically stackable frame hives are commonly used in the United States and in Europe. It is estimated that the U.S. has roughly 2.4 million colonies. This type of hive is made of boxes stacked on top of each other and can be broken down into seven basic parts:

• Bottom board is the floor of the hive and provides a landing area.

• Brood chamber/deep supers are where the queen lays her eggs. There will be one or two brood chambers on at a time.

• Queen excluder is placed between the brood chamber and honey supers to keep the queen from laying eggs in the honey supers. The workers are small enough to fit through, so they can work in both areas.

• Honey supers are where the honey is made and stored. At any given time, there will be one or more honey supers on the hive.

• Frames are put into both the brood chamber and honey supers. They have a foundation in them to help the bees start their honeycomb.

• Inner cover creates a dead air space to insulate the hive against heat and cold.

• Outer/telescoping cover is covered with heavy-duty aluminum to protect the hive from the elements.

The hive in its entirety will be put on some sort of stand/base to give support and to keep it off the damp ground. Many times, this base is just a few cinder blocks. The average temperature of the hive is 95 degrees Fahrenheit. The bees maintain this by fanning the hot air out when it’s too hot and creating metabolic heat when the hive is too cold.

The European Honey Bees (Apis mellifera) are amazing creators, traveling up to three miles in any direction to forage and use a wiggle dance to communicate. There are three members of a hive; the queen, worker, and drone. There is only one queen per hive and she is the biggest bee in the hive. She is the boss, living two to seven years, and can lay about 1,500 eggs per day. The worker bee is the smallest member and on average there is about 50,000 per hive during the summer. They do everything from hive care, hive defender, foraging, and activities related to the queen. In their lifetime, which can last 22 to 42 days, they will make about 1/12 of a teaspoon of honey. The drone's one mission is to mate with a queen. If he has successes, it will kill him. Working together they make the honey we have come to enjoy.

Honey, also known as liquid gold, has great value as a food. It can be used in cooking, baking, or added to tea, in addition to that, it can also be eaten raw. Honey also comes in many forms and flavors. The flavor can be affected by time of harvest and the floral source/sources. For example, honey made primarily form blueberry can sometimes have a blueberry aftertaste and basswood/linden tree honey can have a hint of mint. Honey also comes in many forms, here are just a few:

• Crystallized or granulated honey is just honey that has spontaneously crystallized. It has not gone bad, it just needs to be heated to return to a liquid state. The best way to do this is by a warm water bath, do not boil.  Also, do not put it into the microwave, this will destroy the beneficial enzymes and properties of the honey.

• Raw honey has had minimal to no processing done to it. If heat is used, it will not be above 105 to 115 degrees Fahrenheit. Sometimes it will run through a minimal strainer during bottling, but this honey will still have pollen, wax, enzymes, and the occasional bee part.

• Strained honey is similar to raw honey. It is just pasted through a more substantial mesh strainer. This removes the wax, propolis, and bee parts. Most small scale/local beekeepers will sell their honey this way or in raw form.

• Creamed or whipped honey is a honey that has been processed to make a smooth spreadable cream. It is lighter in colored to liquid honey.

• Comb honey is honey left in the honeybees’ wax comb. It is harvested by cutting the comb out of the frames or by using special frames.

• Infused honey is made with herbs, such as mint, rose petal, and lavender. The herbs are placed in warm honey and left in the jar for a few weeks. The herbs are then strained, and the honey is ready to eat.

Beekeeping is a long-held tradition, done all over the world. This is just a basic look at how beekeeping is done and the amazing ability of bees. So, if you’re looking for a sweet treat, don’t be afraid to find a beekeeper for some local honey and give it a try.