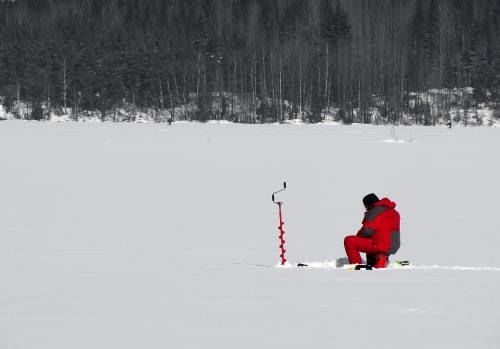 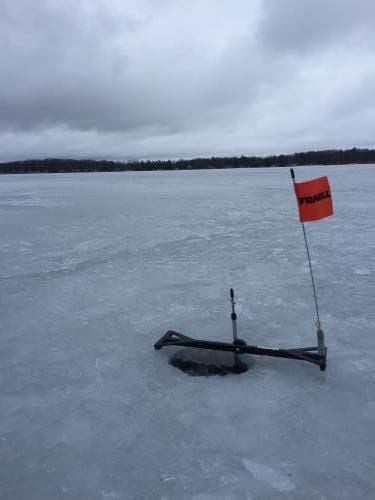 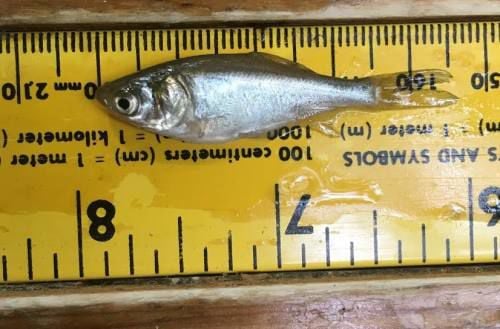 Juvenile silver carp, one of four species referred to as Asian carp. 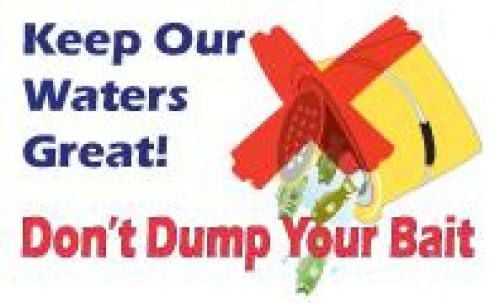 Juvenile silver carp, one of four species referred to as Asian carp.

Temperatures are dropping and the ice is thickening.  More and more ice fisherman will be hitting the so called “hard water‘ in the upcoming weeks, and local lakes will soon to be dotted with ice fishing shanties. With over 11,000 inland lakes in Michigan, and plentiful public access locations, it is not difficult to find a place to fish for the afternoon.

Ice fishing is a great way to pass the time during Michigan’s long, cold winters. As an added benefit, Northern Michigan’s healthy and productive lakes can help put some food on the table. Unfortunately, these bountiful water bodies are being threatened by unwanted guests. Invasive species are finding their way into our lakes and streams at alarming rates, and one of the main sources of introduction is humans.

By definition, an invasive species is an introduced or non-native species, which causes economic, human health, or environmental problems. Some species of concern to Michigan water bodies include Asian carp, snakehead, round goby, Eurasian ruffe and red swamp crayfish. These invaders have devastating impacts on lakes and streams. Their aggressive appetites and lack of natural predators lead to population booms, and ultimately, the decline in our desirable native species and related opportunities for anglers. Because of this, preventing the spread of invasive species is a high priority.

One way invasive species get introduced is through bait buckets. Bait-bucket-introductions are simply that, invasive species introduced to a water body through bait buckets. These introductions are not limited to just the bait within the bucket, but the water as well. The water can hold microscopic organisms and fish diseases, invisible to the human eye.

Stopping bait-bucket-introductions relies heavily on public education, both about what invasive species are and how to identify them, as well as the rules and regulations surrounding live bait usage. Kevin Walters, an Aquatic Biologist with the Michigan Department of Environment, Great Lakes, and Energy, talked about his organizations efforts on the issue, “we’re spreading the word through publications such as the DNR’s fishing guide and press releases, and through face-to-face conversations with anglers.‘ Walters, who specializes in aquatic invasive species, also suggested that people can reference Michigan.gov/invasives for a full list of Michigan’s watch list invasive species and helpful tips on identification.

The regulations established with NREPA apply to any and all anglers who use live bait in the state of Michigan. Anglers that choose to collect their own bait are only allowed to use that bait in the waters in which it was collected. This is important because in the juvenile stage many invasive species are hard to identify, often resembling some form of shiner, or other bait, typically used for ice fishing. By not transporting bait from water body to water body, anglers not only stay within the law, but ensure they do not spread invasive species.

For anglers that do not collect their own bait, bait should be purchased from reputable commercial bait dealers. Commercial bait harvesters and retailers are regulated by the State to insure they do not have bait that is compromised by invasive species or infected with fish diseases. Information about licensed bait retailers across the state is available on the Michigan DNR’s website, www.dnr.state.mi.us/retailbait/.

Whether purchased or collected, unused baitfish should be disposed of on land or in the trash — never in the water. In fact, NREPA makes it illegal to release any baitfish into waters of the state.  Violation of these laws can result in fines. This includes disposing of bait bucket water. Disposal of bait bucket water is intended to stop the spread of fish diseases. These simple laws and regulations are not intended to make it tougher on fishermen, but to protect our water resources from the spread of invasive species and fish diseases for generations to come. Before heading out on the ice, be sure to check the most current Michigan DNR Fishing Guide for up to date rules and regulations.

If you suspect you have found a watch list species in your bait bucket, or anywhere else, contact North Country Cooperative Invasive Species Management Area (NCCISMA) Technician at 248-210-6047 or by email at zach.peklo@macd.org.

For more information about NCCISMA, drop by our office at the Wexford County Courthouse, visit our website at www.northcountryinvasives.org or contact us by phone at 231-429-5072, or email at Vicki.sawicki@macd.org.