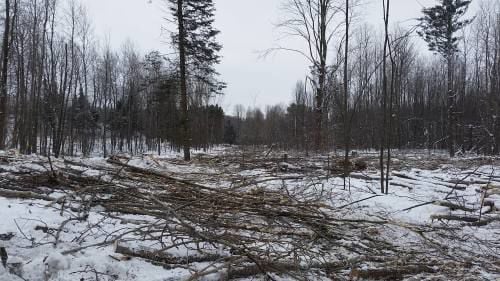 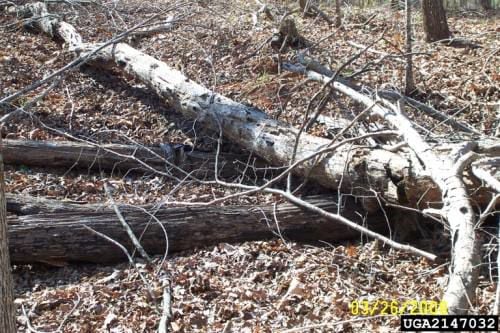 Larger debris trees contribute to the slow, steady stream of nutrients to the soil.

Larger debris trees contribute to the slow, steady stream of nutrients to the soil.

The soil beneath us used to be considered as a forever thing. Crops change, weather changes, but the soil will always remain the same. But it doesn’t.

Following decades of logging, and then plowing, landowners learned that the soil that covers the earth can be abused and sometimes lost; through the effects of fire, wind and water. The era of what we call the “Dust Bowl‘ saw the effects of decades of such abuse. Few people alive today remember those early decades.

In 1935, Congress created the Soil Conservation Service to work with farmers to stop the loss of topsoil. Their work lead to filter strips, contour farming, and Soil Bank tree planting. Later giving way to low-till, no-till farming, and Conservation Reserves.

But what about our forests? Much of the forests that we see today were cleared land in the early 1900s. The soils that these forests are growing on were likely burned and eroded as well. Native forest soils of Michigan were shaded and cool. Thousands of years of natural processes allowed the topsoil to be rich in organic material that provided a flow of nutrients deeper in the soil. Decomposing organic matter provided nutrients, made those nutrients easier for plants to absorb, and held more water that makes the whole process of growth happen for a plant.

When the forests were logged, that organic soil dried out. Warm organic matter breaks down faster. It may have been burned out of the soil. This allowed the topsoil to just blow away in the wind or wash into streams and rivers. The trees that we see today grew back on drought-prone sands that have little or no topsoil, with little nutrition. For most of us, we do not appreciate how rich these soils used to be.

So, we are confronted with the same issue of the early settlers. Will the soil, even forest soils, always be in this condition? Can the soil ever be restored? The answer is, yes it can. Forest owners need to learn from the farmers as they have accepted the benefits of no-till farming.

This author often hears forest landowners say that they want their forest logged, but they want the woods “cleaned up‘ afterwards. The branches, tops and small trees are commercially un-useable for most loggers. The remaining debris makes it difficult for a landowner to walk through the area. The debris left by loggers may be unsightly, but it is the key to rebuilding the soils. You see, logging debris can be a good thing.

We all like to take a walk in a national or state park often because old forests usually have big trees. We like the relatively untouched landscape. One of the typical traits of old-growth forests include having large fallen trees and branches that lie on the ground. This is exactly how our native soils came to be so rich over the centuries. This is also how today’s soils can be replenished.

To do so requires a different perspective. Let’s face it, logging, even good logging, is not pretty. Bad logging looks even worse. How can we make logging debris “work‘ so that landowners can live with not having their timber harvest look horrible — forever. I would recommend having the debris cut by the logger to within two feet of the ground. This will cool the ground, as well as have the ground moisture begin the process of decomposition sooner.

Even the loss of ash and beech trees will be used in this same natural process of soil building. Larger trees that break up and eventually fall over are a crucial part of that age-old natural process. The small diameter wood will decompose within a few years. Larger wood will take many years. Both contribute to a slow, steady stream of nutrients to the soil. How many times have we hiked in the woods and stepped on a large log, only to feel it crumble under our weight? This is the process of forest soil-building.

To see forest soils replenished requires patience. It only took 50-70 years to deplete our forest soils, but it will take much, much longer to rebuild them. The reader may not live long enough to see a significant difference in the soil, but it is necessary to begin if we are going to build our forest soils back up. It will likely take many decades, maybe several generations.

Farmers who work their land several times a year can see significant improvement in their land with measures to enhance the organic material in their soils. Forest owners should recognize that their soils are starting out with a deficiency and work slowly and patiently to allowing woody material to linger on their land and let mother nature use it to do the rest.

Larry Czelusta is the Forester for Wexford, Missaukee and Kalkaska counties. For more information about trees and forestry, contact Larry by phone, email or stop by the office at the USDA Service Center at 7192 E. 34 Rd. (Boon Road) in Cadillac.