Skip to main content
You are the owner of this article.
Edit Article Add New Article
You have permission to edit this article.
Edit
Login
Home
News
Sports
Entertainment
Community
Obituaries
Classifieds
Contact Us
Today’s Paper
Publications
Other
1 of 6 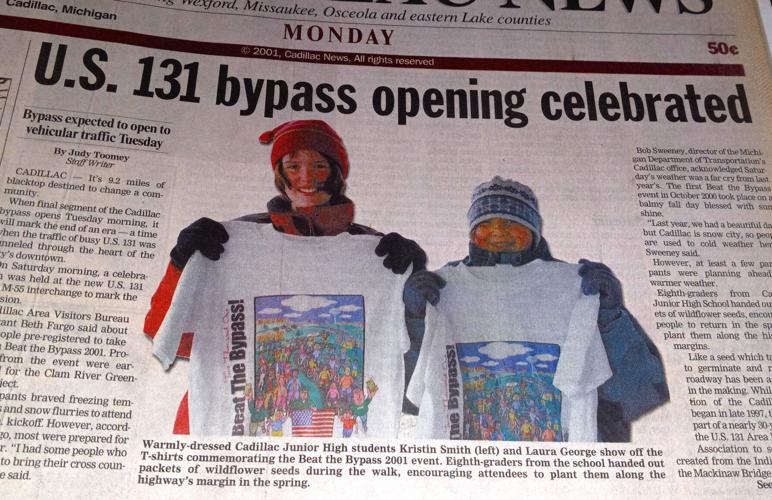 Pictured is a clipping of the Cadillac News when the U.S. 131 bypass through Cadillac was finished. 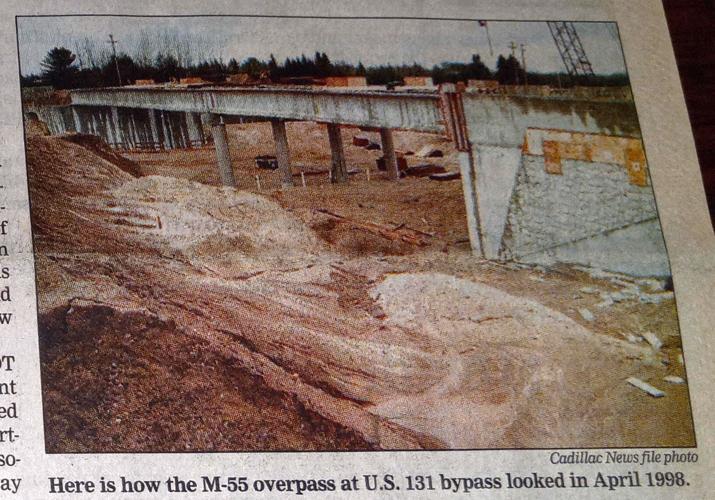 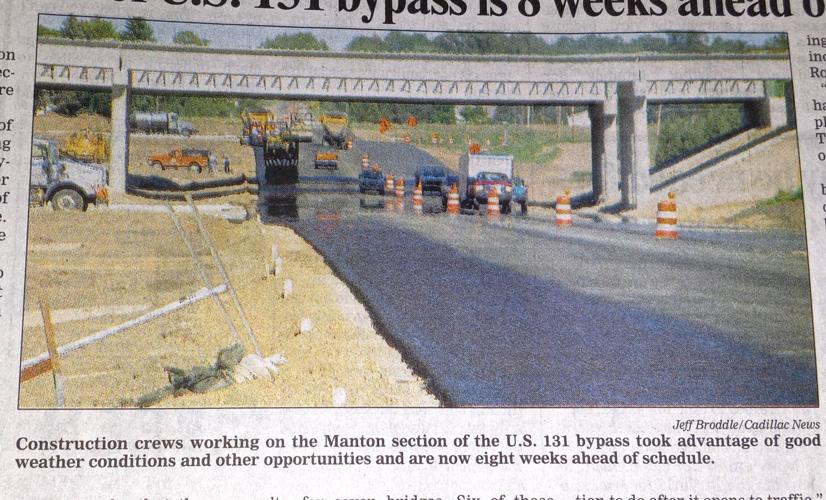 Pictured is a clipping from an August, 2002 issue of the Cadillac News, when crews were still in the process of building the bypass through Manton. 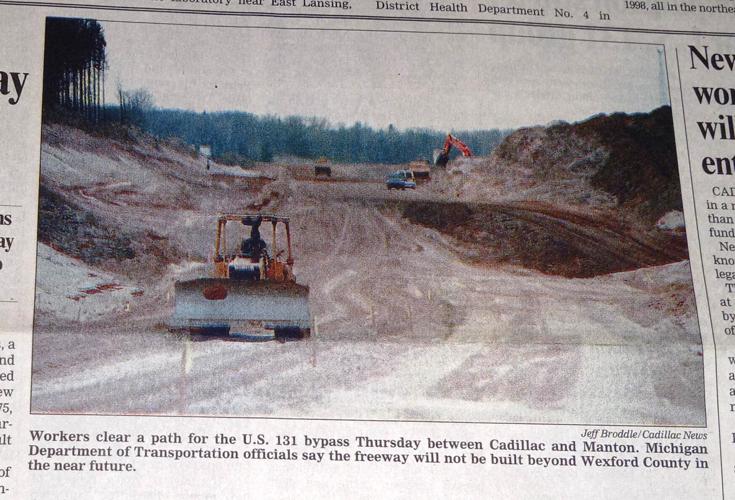 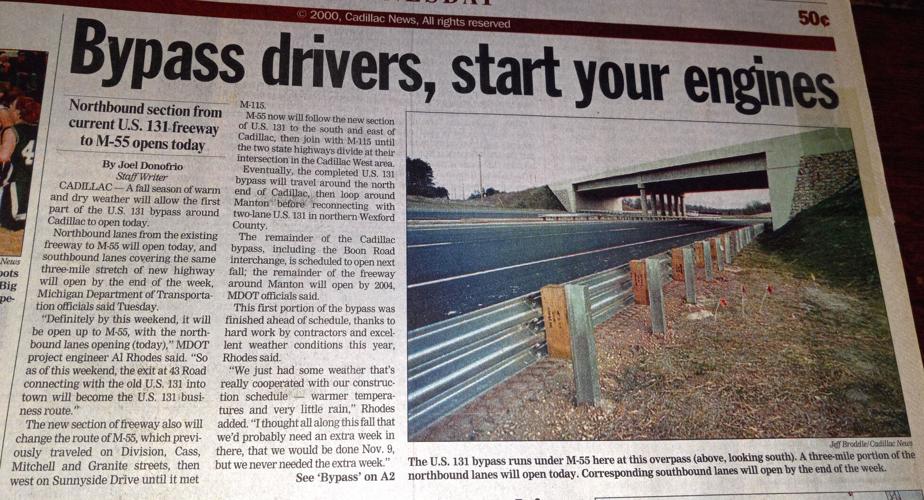 Pictured is a clipping of a November 2000 issue of the Cadillac News, when the first part of the U.S. 131 Cadillac bypass was completed. 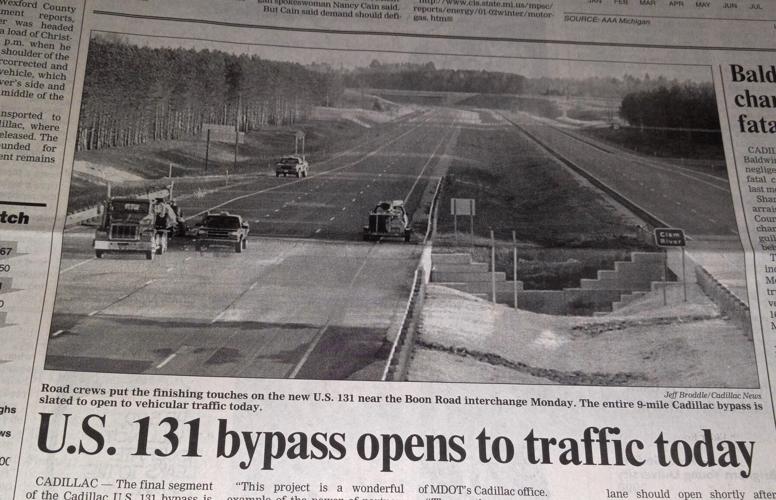 Pictured is a October 2001 clipping of the Cadillac News, when the final stage of the U.S. 131 Cadillac bypass was completed.

Pictured is a clipping of the Cadillac News when the U.S. 131 bypass through Cadillac was finished.

Pictured is a clipping from an August, 2002 issue of the Cadillac News, when crews were still in the process of building the bypass through Manton.

Pictured is a clipping of a November 2000 issue of the Cadillac News, when the first part of the U.S. 131 Cadillac bypass was completed.

Pictured is a October 2001 clipping of the Cadillac News, when the final stage of the U.S. 131 Cadillac bypass was completed.

CADILLAC — Few local developments over the last 150 years match the scale and impact of the U.S. 131 bypass around the cities of Cadillac and Manton — a project that changed the landscape of Northern Michigan and was the byproduct of more than three decades of planning.

Exactly 50 years ago today, on Sept. 21, 1972, the Cadillac Evening News ran an article about a visit that representatives of the U.S. 131 Area Development Association made to Washington, D.C. to advocate for the construction of a four-lane freeway from the Indiana border to the Straits of Mackinac.

This wasn’t a one-off event: through the late ‘60s, ‘70s, ‘80s, ‘90s and early 2000s, the group worked doggedly and tirelessly toward making the highway extension happen.

According to Cadillac News reports, momentum for building the bypass began picking up speed in the 1960s as U.S. 131 was gradually converted from a two-lane highway into a four-lane freeway from Grand Rapids to Cadillac.

In October 1969, representatives from many communities along the U.S. 131 corridor met in Cadillac to discuss ways to expedite the completion of U.S. 131 as a four-lane freeway across the state.

From the start, the organization argued that safety, tourism and jobs would be benefits of the bypass around Cadillac, although it took the state transportation agency some time to be convinced about the idea’s merits.

“One of the reasons that we got involved was MDOT said, ‘No, we’re not going to look at the Cadillac bypass, we’re not going to do anything with it,” said former U.S. 131 Area Development Association President Herb Carlson at the time of the Cadillac bypass’s completion. “U.S. 131 (association members) kind of dug in their heels and pushed for the bypass around Cadillac.”

In response to pressure from the U.S. 131 Area Development Association, along with numerous letters from residents and resolutions from area municipalities supporting the extension, MDOT in the late 1970s conducted a transportation study of the highway in the Cadillac area and identified a number of deficiencies, both safety-wise and capacity-wise.

At the time of the bypass’s completion, then-MDOT Cadillac Transportation Service Director Bob Sweeney said it ultimately was the potential safety hazards and traffic crunch of local residents making downtown turns and tourists trying to move through the Cadillac area quickly that compelled officials to eventually agree to build the bypass.

In 1986, MDOT began alignment studies to determine improvement options for the highway. After several years of studies, in 1992, MDOT and the U.S. Department of Transportation approved the final environmental impact statement and between 1992 and 1997, funds were set aside and design work was completed.

It wasn’t all smooth sailing during that time, however, as officials worked through all the complications, hiccups and delays that inevitably came along with a project of this size.

“Landowners are wondering why survey stakes are being placed on their property when they are out of alignment with what we thought was the designated bypass for Manton,” said Eleanor Sosenko, then-co-facilitator of the Manton Area Doers Development Organization Group (MADDOG) in 1993. “And why aren’t they going to people’s doors and letting them know why they are on their property? People here are real nervous and concerned ... I’ve been told the design work for Cadillac is six months behind. So that means our bypass is far more than six months behind schedule. And we don’t want to wait any longer than we have to for our bypass.”

Property acquisition began for the U.S. 131 bypass around Cadillac in 1996.

“Probably in May or June we will be making offers to people,” said Craig Delaney, who was the district MDOT real estate agent who oversaw the acquisition of about 220 parcels including around 35 houses along the 10-mile bypass corridor. “We don’t need the houses until the summer or fall of 1996, but we want to give them all the time they need.”

Bypass construction officially began on Aug. 3, 1997, and was kicked off by retiring state transportation director Bob Welke, who admitted it was a long time coming.

“I know we’ve made promises and promises,” Welke said. “But this is promises kept and that’s important.”

The project’s $13 million first phase would include construction of three bridges from Crosby to Boon Road, what Welke called the keystone to the entire four-year project. The second phase would take the bypass to Manton.

The first section of freeway was completed ahead of schedule thanks to decent weather conditions and was opened to traffic on Nov. 1, 2000. This section included the north and southbound lanes from the existing freeway to M-55.

“I think it’s a great thing for our community,” said then-Cadillac Mayor Ron Blanchard. “The removal of heavy trucks from our downtown streets is truly a positive, and this will allow us to beautify the downtown corridor.”

The Cadillac News noted at the time that anyone who tried to travel on Mitchell Street from Thursday evening through Sunday afternoon in the summer months knew that a great deal of tourist traffic used U.S. 131 to head north.

Although smaller towns might worry that a bypass would carry potential customers around downtown stores, city officials believed Cadillac had enough tourists stopping to stay in the area that local merchants would remain busy with out-of-town customers.

“At the end of the day, Cadillac is still a big enough community to be a destination point,” Cadillac City Manager Pete Stalker said. “Unlike some smaller towns, we don’t have to worry about people going by and leaving us behind.”

Although heavy tourist traffic was considered a pain, downtown shoppers were more concerned about large trucks that used U.S. 131 as a delivery route.

“This particular project had the overwhelming support of the public in general ... and a big factor was getting the truck traffic out of downtown,” said Sweeney, with MDOT. “With the parking and five lanes of traffic going through town, it was a pretty congested area, and the trucks made it worse.”

State Rep. Rick Johnson, a Republican from LeRoy, noted that this portion of the bypass should immediately reroute east-west trucking traffic out of downtown as the M-55 route changes.

“You’re going to see a rebirth of downtown Cadillac once the bypass goes in,” Johnson said. “All the large truck traffic has a new route, the new route for M-55 will be signed and will use 115, so that should take away a lot of the large logging industry trucks that currently go through. I think they’ll see more people downtown ... With the bypass going around, it’s going to take the excess traffic around and bring the locals back into the city.”

“Just getting the truck traffic and through traffic out of there will make the downtown more pedestrian friendly,” Stalker added. “It’s tough to promote our downtown as a place you can walk around and shop when you have trucks tearing through as you’re trying to cross the street.”

About a year after the first section of the freeway was finished, the final segment of the Cadillac bypass was completed and in a celebration held that Saturday, the project was commemorated to the late Rep. Sidney Ouwinga, who was instrumental in getting the project off the ground.

The next phase of the project, which would be completed in 2003, was the construction of the bypass around the city of Manton.

Although those in the U.S. 131 Area Development Association at the time said they would like to see the four-lane freeway extend north beyond Wexford County, MDOT officials said they had no plans for such an extension anytime in the near future.

“We recently completed the economic feasibility study for the segment from Manton to Kalkaska,” Sweeney said. “And that study came back and recommended that at this time, a freeway alternative is not recommended.”

According to the study, a substantial amount of traffic traveling north of Manton on U.S. 131 turns off on M-113 to head toward Traverse City. Sweeney said the number of cars remaining on the highway as it goes north to Kalkaska do not justify converting the road into a freeway at this time.

Even if there was sufficient traffic counts to merit plans for more freeway, building a new road is very costly. Overall, the cost of 20 miles of freeway as U.S. 131 was expanded into Wexford County was budgeted (in 2001) at $145 million. This money was approved by state and federal officials, a process which took time and a bit of political maneuvering as state legislators went back and forth on Gov. John Engler’s gas tax increase in 1997.

So instead of building more four-lane highway into Kalkaska County, MDOT looked at various minor improvements to help ease the traffic crunch of holidays and summer weekends — items such as additional passing lanes, advance turning lanes at intersections and even reducing the number of driveways and smaller roadways which intersect with U.S. 131.

When the Manton bypass was completed, the freeway ended in Wexford County, and that remains the current configuration of the highway to this day.