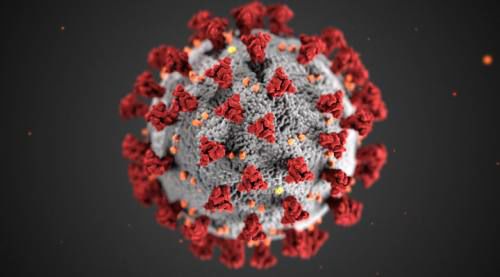 There are 549 confirmed COVID-19 cases in Michigan but none are local. 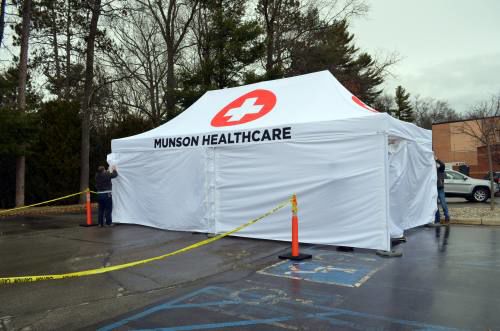 A drive-thru tent is being used to test people for COVID-19 at Munson Medical Center in Traverse City (picture provided to the Cadillac News on Friday, March 10, 2020).

There are 549 confirmed COVID-19 cases in Michigan but none are local.

A drive-thru tent is being used to test people for COVID-19 at Munson Medical Center in Traverse City (picture provided to the Cadillac News on Friday, March 10, 2020).

CADILLAC — A Wexford County resident has tested positive for COVID-19, according to a news release from District Health Department No. 10.

The local health department was informed late Friday afternoon by the Michigan Department of Health and Human Services, according to Jeannine Taylor, District Health Department No. 10's spokesperson.

The MDHHS said the patient has a history of domestic travel.

“Our team is right now actively reaching out to the individual,‘ Taylor told the Cadillac News by phone Friday shortly after 5 p.m.

"With this confirmed case, Munson Healthcare Employee Health is actively notifying the staff who were involved in the screening of the patient and following up accordingly," the healthcare system said in a news release.

The healthcare system has mobile screening sites in each of its communities with hospitals.

"Screening at these locations significantly reduces the risk of infection to others, including staff. These sites are not open to the general public. Patients must have a lab order from their provider in order to be screened," Munson said.

The Wexford County case is under investigation, Taylor said. The health department is working to learn more about the patient as well as any exposure community members might have had.

Earlier in the afternoon, it appeared the disease had not yet come to the District Health Department No. 10 region. That changed later when the state informed the local department of the Wexford County case.

“We hope for the speedy recovery of our resident,‘ District Health Department No. 10 Medical Director Dr. Jennifer Morse said. “DHD No. 10 is relying on our communities to work together, be vigilant, and take the necessary precautions to slow the potential spread of illness. We encourage the public to avoid panic and turn to reputable sources for information. We continue to recommend prevention strategies to reduce the spread of germs and protect everyone’s health.‘

More than 100 people in the 10 counties that the health department covers have been tested for the novel coronavirus but most test results have not come back yet; 24 were negative as of 2 p.m. Friday.

Statewide, there were 549 COVID-19 cases and three deaths as of the state's 2 p.m. public update Friday.

Hours later, Gov. Gretchen Whitmer gave a press conference in which she addressed a "false" and "dangerous" rumor.

The governor asked for federal funding for the Michigan National Guard to help people, not to declare martial law, she said.

The governor criticized the use of social media to spread the rumor.

"It is dangerous for people to foment fear," Whitmer said.

The National Guard would "be used to aid in the distribution of food and supplies for families and businesses that have been impacted by the spread of COVID-19," Whitmer said.

The governor also announced that some Michigan businesses would be pivoting to assist in building ventilators, for which there is a national shortage.

Michigan had just over 1,000 ventilators as of a couple of days ago, according to Michigan Department of Health and Human Services Chief Medical Executive Dr. Joneigh Khaldun.

The governor and the health department are urging people to be vigilant and continue taking safety precautions.

•  Clean hands often. Scrub with soap for at least 20 seconds. Use hand sanitizer if soap and water is not available.

•  Stay home when you are sick, except to get medical care.

• Cover your cough or sneeze with a tissue, then throw the tissue away and wash hands immediately.