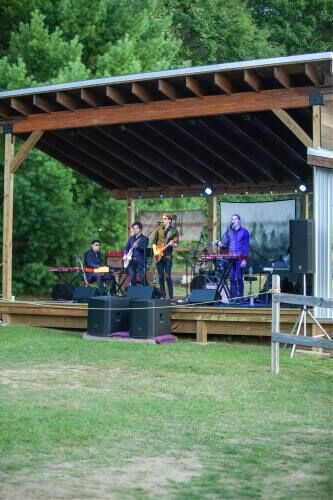 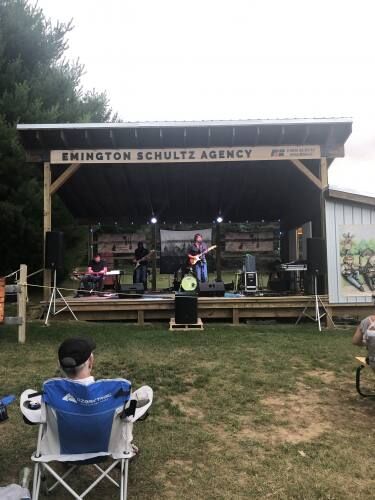 CADILLAC — Musicians have been hit especially hard this summer by the disruptions caused by COVID-19, with many venues forced to limit crowd size or cancel live shows altogether.

At Coyote Crossing, however, the fortuitous construction of an outdoor pavilion area in 2019 has allowed them to salvage most of their summer concert series and give area musicians a place to perform.

Coyote Crossing co-owner Julie Finch said the start of their concert series was delayed by about a month (starting on June 13 instead of May 15), and a handful of artists canceled their appearances after the coronavirus reached Michigan.

Finch said those cancelations were mainly due to concerns some performers had about catching the coronavirus and bringing it home to health-compromised family members.

Fortunately, Finch said they were able to book other artists to take the place of those who canceled and even with social distancing protocols in place, they've been having a pretty good summer.

While the outdoor venue is a huge part of that success, Finch said the support of corporate sponsors has been equally important.

Contributions from Emington Schultz Insurance Agency, Cadillac Tire Center and Betten Baker Chevrolet Buick of Cadillac, along with a number of smaller donors, have allowed them to pay the artists what they previously agreed to even though their customer counts have been down significantly because of the 50% capacity cap.

This Saturday, Aug. 8, Coyote Crossing will be hosting the Michigan Rattlers, an "alternative country" band originally from Petoskey.

Finch said the Michigan Rattlers show on Saturday will be their only performance of the summer. Tickets are on sale through the Coyote Crossing Facebook page and will be limited to 125.

The Michigan Rattlers take the stage at 9 p.m. but before that, Finch said local musicians Adam Joynt and Zac Bunce will be opening the show at 8 p.m.

Although there won't be a show Saturday, Aug. 15 (which would have been when the Hoxeyville Music Festival is held), performances will be held again on Aug. 22. and every Saturday through Sept. 5.

In addition to booked performers, open mic nights are held every Thursday starting at 8 p.m. A different host kicks off the evening each week, with their own short performance. Musicians are asked to bring their own microphones and instruments.

Patrons who attend the Michigan Rattlers show and other performances at Coyote Crossings are reminded to practice social distancing and wear masks when they're not seated.

For information, look up Coyote Crossing on Facebook, go to www.coyotecrossingresort.com, or call ( 231) 862-3213.