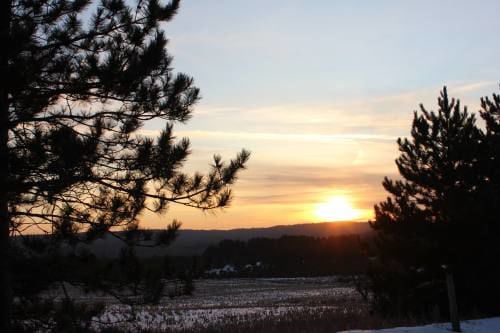 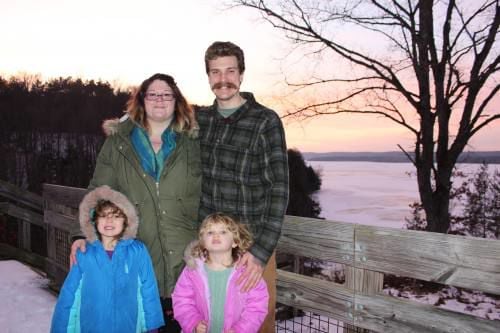 The Nitor family (Danielle and Andrew with daughters Roslyn and Evelyn) pose for a picture at a scenic overlook of the Hodenpyle Dam on the Manistee River. The Manistee, like other rivers in Michigan, was formed when glaciers retreated from Michigan. 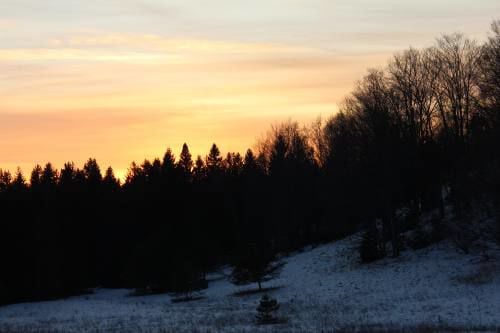 The Nitor family (Danielle and Andrew with daughters Roslyn and Evelyn) pose for a picture at a scenic overlook of the Hodenpyle Dam on the Manistee River. The Manistee, like other rivers in Michigan, was formed when glaciers retreated from Michigan.

Michigan is blessed with an abundance of natural beauty. Forests, rivers, lakes, hills and valleys flash by your windows as you drive through our state.

The mitten state was once a battleground between rock and ice. The state’s natural resources are byproducts of that battle, more than 10,000 years in the past.

The Cadillac News reached out to geoscientists to learn more about the view out your window and for tips in reading the landscape.

“I tell my students that Michigan’s landscape is a ‘gift of the glaciers,’‘ said Mark Francek, Ph.D., in an email to the Cadillac News. Francek is a Professor of Geography and Environmental Studies at Central Michigan University. “Our water, hills, recreational opportunities (skiing, water sports), gravel for roadbed — all originate because we had mile high ice here at one time.‘

Briar Hill, the 1,700-foot summit in Wexford County between Harrietta and Mesick, is thought to be lower Michigan’s highest point.

Wexford County’s Yuma Hills — the area between Yuma and Manton “with high topography‘ as Michigan Department of Environment, Great Lakes and Energy Geology Specialist Bob Versical puts it — were formed at a time when the glaciers were at a standstill, about 10,000 years ago. But soon, in geological terms, anyway, the glaciers started retreating again and left Wexford County and the Great Lakes region about 8,000 years ago.

A much more modern metaphor — a conveyor belt — paints a picture of what the process looked like.

“Think of the glacier as being a bulldozing conveyer belt. As the glacier advanced it bulldozed material out ahead of it,‘ Francek said.

When the glacier wasn’t moving, the internal “conveyer belt‘ would “bring glacial drift to its snout, further building the Yuma Hills, Francek said.

Gravity and water did the rest.

They’re still doing it, actually, but trees are fighting back. That’s why Francek suggests protecting the forest on the hills from clearcutting.

“Streams and gravity are tearing down the hills, albeit slowly because a veneer of vegetation protects wholesale denudation,‘ Francek said in response to a question about how the hills are changing over time. “They must also be protected from clearcutting, as gravity and water will produce erosion scars.‘

If you grew up drawing mountains as triangles, you might think Michigan’s highest summits (National Geographic Society says the difference between hills and mountains used to be whether the summit was more than or less than 1,000 feet, though geologists no longer use that definition) are too round. But it’s because of the trees.

“Their rounded appearance, due to the protective influence of vegetation, is very different from the angular landscape you would see in the desert Southwest,‘ Francek said.

The hills are good for growing trees, but not much else (the southern sides are warmer and more hospitable to animals and plants, however).

Now part of the Huron-Manistee National Forest, the soil on the Yuma Hills is so rocky that farming was impractical, Versical said. The federal government acquired the land after farming failed.

The exception is the flat areas that parallel M-37 from Mesick south, Versical said. Glacial meltwater flattened the landscape there, making it somewhat easier to farm, though the soil is still “not the most productive.‘

Flat areas are glacial outwash of sand and silt that were deposited by old rivers, Versical said.

Water is lazy but powerful.

The major rivers in the Cadillac News coverage area — the Manistee, Muskegon and Pine — are here because of a process called “ice margin drainage.‘

“As the glacier retreated, meltwater looked for the path of least resistance along the ice margin, on its downhill path to what would one day be Lake Michigan,‘ Francek explained. “Little valleys formed as the water carved into unconsolidated (not bedrock) glacier debris (drift). Without the rivers, the land would not have as pronounced valleys and surrounding hills.‘

Today’s rivers are small compared to the size they were when the glaciers were melting.

At that time, the rivers were “a heck of a lot bigger than they are today, Versical said.

You can see evidence of that in the valley by Hodenpyl Dam. The flat areas are two to four miles wide and were likely a “braided‘ river system, one with multiple branches, Versical explained.

Some of the things mined in local counties are the result of glaciers. Others are decidedly not.

Sand and gravel are both mined in local counties, and those deposits were left by glaciers.

But the sand wasn’t made here.

The sandy soil in your backyard likely comes from Ontario. The glaciers squashed bedrock there, slowly turning the chunks of rock into smaller and smaller pieces, until it became sand that the glacier nosed south across what is now Michigan.

You can trace some rocks in the glacial drift to their sources in Ontario, Versical said.

“Pudding stones,‘ a white boulder with red and purple specks, are one example. They’re sometimes found in northern Lower Michigan, but they came from Drummond Island or Ontario.

Potash and oil were here a long, long, long time before the glaciers squashed Michigan into being.

Wexford County’s oil is found in a deposit that was discovered in Presque Isle County in 1969. That deposit runs southwest to northeast across northern lower Michigan, from north of Alpena to Manistee, said Versical, who works in the Oil, Minerals and Gas division of EGLE. The deposit is several miles wide.

But despite how big the oil deposit is, you won’t see any above-ground clues what’s below, other than the wells and mines you might notice. Glaciers re-arranged the landscape above the oil deposits.

“Glaciers messed everything up,‘ Versical said.

The oil got here long before the glaciers did.

In the Paleozoic era, Michigan was a warm, shallow sea in the tropics, Francek said.

“Millions of years worth of plankton living, dying, and sinking to the bottom of the sea, eventually forming oil,‘ Francek said.

Osceola County’s potash deposits also owe their existence to the ocean that used to cover Michigan some 400 million years ago, Versical explained.