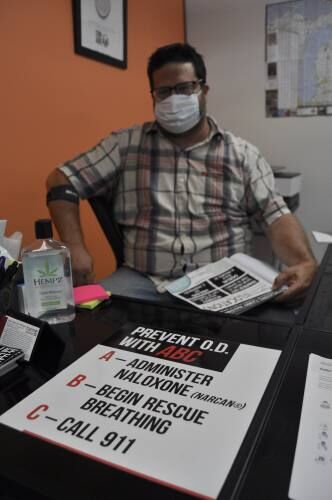 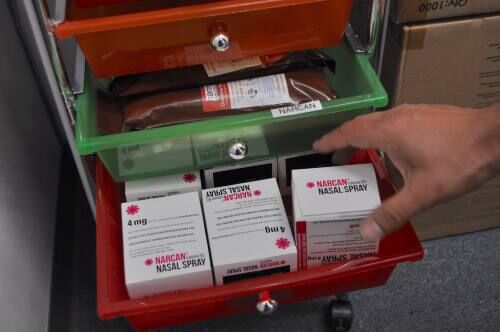 Pictured are some containers of the overdose-reversing drug naloxone at the Harm Reduction Michigan location in Cadillac. 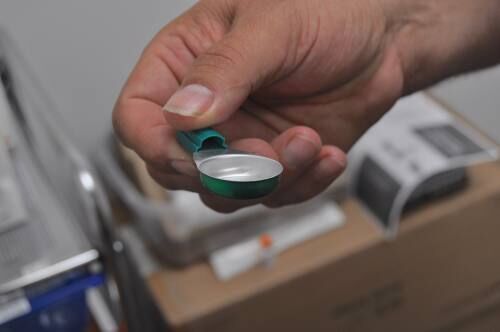 Pictured is an apparatus used to "cook" drugs that are then injected intravenously. Harm Reduction Michigan distributes clean needles and other items in order to increase drug use safety. 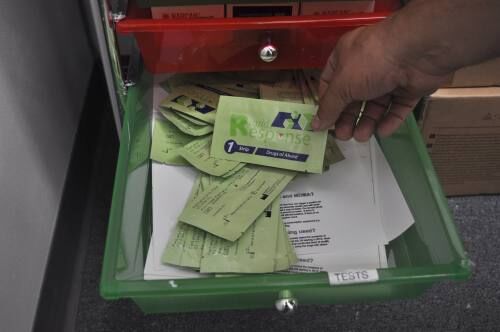 Pictured are some kits used to test substances such as heroin for fentanyl and other impurities. 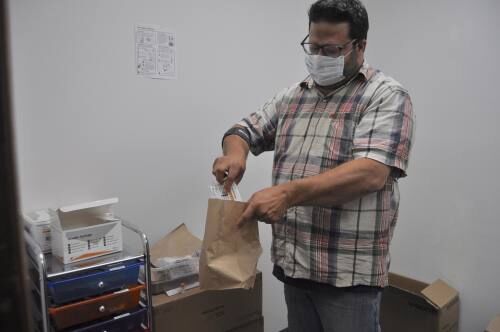 Harm Reduction Michigan volunteer Derrick Smith bags up items they distributed to drug users to help them use more safely. 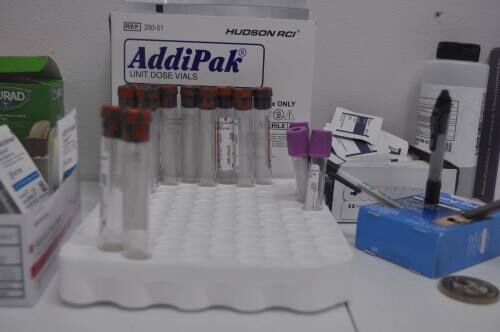 Pictured are some vials used at the Harm Reduction Michigan office in Cadillac to collect blood to test for hepatitis and other diseases.

Pictured are some containers of the overdose-reversing drug naloxone at the Harm Reduction Michigan location in Cadillac.

Pictured is an apparatus used to "cook" drugs that are then injected intravenously. Harm Reduction Michigan distributes clean needles and other items in order to increase drug use safety.

Pictured are some kits used to test substances such as heroin for fentanyl and other impurities.

Harm Reduction Michigan volunteer Derrick Smith bags up items they distributed to drug users to help them use more safely.

Pictured are some vials used at the Harm Reduction Michigan office in Cadillac to collect blood to test for hepatitis and other diseases.

CADILLAC — All it took was a couple of months to reverse years of progress that has been made in the battle against drug addiction in the Cadillac area.

At Munson Healthcare Cadillac Hospital there has been a 25% uptick in overdose emergency visits since April, Whelan said.

While it’s impossible to say for certain that more people are using, Whelan said the COVID-19 pandemic definitely has made it more challenging for those struggling with substance use disorder.

Over the past several years, Whelan said significant strides have been made in reducing the harm caused by drugs, including improved availability of the overdose-reversing drug naloxone, creation of programs to reduce the stigma surrounding addiction, more immediate access to drug treatment programs and referrals, virtual counseling options, counseling for inmates at the Wexford County Jail, and medication-assisted treatment, to name a few.

“We’re better at meeting people where they are,‘ Whelan said. “But COVID really kicked us in the pants.‘

Wexford County Prosecutor Jason Elmore said drug cases have been piling up because of COVID.

“While Lansing has approved us to do trials, the restrictions still make it nearly impossible,‘ Elmore said. “Our courtrooms are not equipped to handle jurors, witnesses, attorneys, and the public with social distancing and other requirements. This means that we have several cases simply sitting in wait, including a couple serious drug cases.‘

Elmore said the disruptions caused by COVID also made it more difficult to monitor people with pending charges, in addition to inmates who were released as part of the reduction in jail populations ordered by the state.

“Testing and enforcing bond conditions became problematic,‘ Elmore said. “Many defendants simply refused to comply while enforcement was a problem. I suspect that this allowed the drug problem to fester.‘

At the same time, Elmore said area police agencies and his office weren’t able to devote as much of their attention to drug cases.

“Our police officers spent a lot of their time dealing with the reports of stay-at-home order violations,‘ Elmore said. “They were and remain on the front lines addressing the complaints professionally, but it took a great deal of their time and ours. It diverted a great deal of resources.‘

On the treatment said, while most agencies quickly adapted to the shutdown by offering online or telephonic consoling options, Whelan said there was a period when virtually nothing was available for those struggling with addiction.

At the Harm Reduction Michigan location in Cadillac, the disruptions caused by the pandemic highlighted perhaps the area’s biggest problem drug — the powerful stimulant methamphetamine.

Harm Reduction Michigan offers services such as medication-assisted treatment, testing for hepatitis and AIDS, naloxone, syringes, and other products intended to promote safe drug use.

Pam Lynch, director of Harm Reduction Michigan, said she believes major improvements have been made in providing help for people struggling with opioid addiction; meth, on the other hand, is a completely different animal.

“It’s a beast,‘ Lynch said. “We worked so hard to quash opioid addiction but now we have a bunch of people addicted to meth.‘

Lynch said it’s frustrating for the medication-assisted treatment providers when their patients who are being prescribed drugs such as suboxone to treat opioid addiction routinely test positive for meth. It’s even more frustrating when they don’t even bother to show up for their appointments with the providers, oftentimes as a result of the chaos in their lives caused by meth.

Elmore confirmed that meth “has been king for years,‘ due primarily to its relatively low cost.

Lynch said another reason why meth is so popular is how powerful it is, even compared to drugs such as heroin and crack cocaine.

Unlike opioids, which can be effectively treated with medications and therapy, Whelan said there aren’t many options available for treating meth addiction.

“It remains the most difficult to have an impact on,‘ Whelan said.

While options remain few at this time, Lynch said they’re looking into offering some type of group counseling service centered around meth and why it’s so addictive.

“There are plenty of people who have not really thought about this,‘ Lynch said. “But I think it’s going to continue to get worse before it gets better.‘

In terms of the damage that COVID-19 has had on drug addiction treatment efforts in the Cadillac area, Whelan said it’s hard to say but there is no doubt that they’ve all taken a few steps back.

“In the middle or end of 2021, we’ll be reading books about how all of this has affected society, with substance abuse being one area,‘ Whelan said.

Virus notwithstanding, Whelan said the No. 1 improvement that still needs to be made in the fight against addiction is better coordination among service agencies such so they’re “all pushing in the same direction.‘