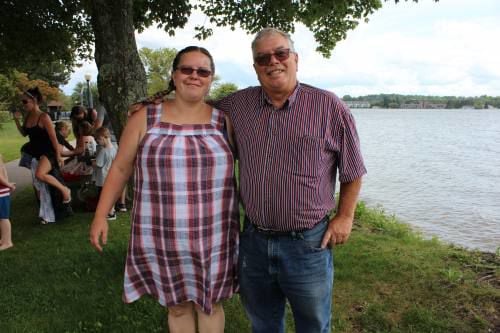 Meagan Long and her biological father, Roger Thomas, pose for a picture by Lake Cadillac. The pair found each other through Ancestry.com. 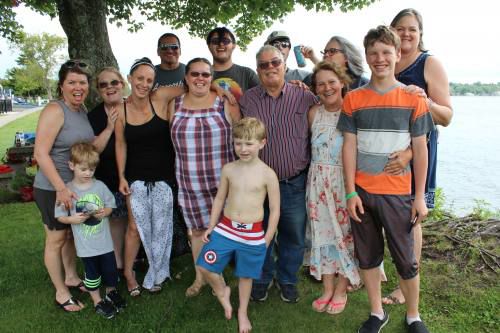 Meagan Long and her biological father, Roger Thomas, center, in red, pose for a picture with other family members alongside Lake Cadillac.

Meagan Long and her biological father, Roger Thomas, pose for a picture by Lake Cadillac. The pair found each other through Ancestry.com.

Meagan Long and her biological father, Roger Thomas, center, in red, pose for a picture with other family members alongside Lake Cadillac.

CADILLAC—Some DNA testing and mild Facebook-stalking later, and a family has found each other.

Meagan Long, 40, now of North Kingstown, Rhode Island, found her biological mother when she turned 18. But her father was a mystery.

Then in January, Ancestry.com told Roger Thomas's nieces that they had a first cousin they knew nothing about. They told another cousin, Courtney Williams of Grand Rapids, and Williams knew just what to do.

"I said, 'What's her name?' and then we started Facebook stalking you,'" Williams said, while a picnic table full of new relatives laughed.

Long was born in Cadillac but grew up with her adoptive family in St. Helen before moving to Rhode Island at 21. She started looking for her biological father after her adoptive sibling helped a friend find an uncle.

The cousins and the aunts knew that Long might be Thomas's daughter before Thomas, 62, of Lake City ever knew she existed.

"I sat on it for a couple of days before I called him," said Thomas's sister, Carol Naugle, of Livonia. She wasn't sure if her brother would want to know. But she called him anyway. "It wasn't for me to decide if he was going to know."

Thomas's reaction was swift: "not me," he said.

For Thomas, now a husband and a father, the news of a 40-year-old daughter was unexpected.

Nobody wakes up in the morning and expects to have a new adult child by the time they go to bed.

"It's hard to explain the reaction," Thomas told the Cadillac News on Wednesday, Aug. 21, during the family's reunion along Lake Cadillac. "You have no idea."

But soon he came around to it, and test results confirmed on May 24 that Thomas is Long's father.

Now, they talk regularly and met for the first time on Tuesday, Aug. 20 at Thomas and his wife Charlene's home in Lake City. They met up with other family members the following day at the park.

Thomas says he hopes to visit Long in Rhode Island to try to make up for 40 years.

"The Lord had a purpose," Thomas said. "Apparently we weren't ready for each other."