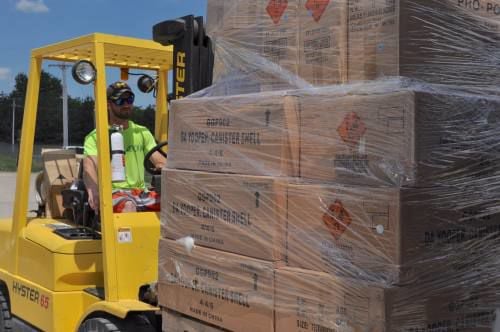 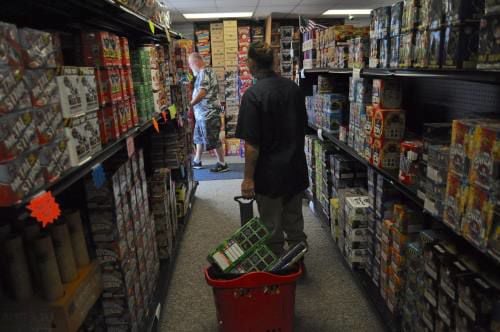 Marion resident Mary Kelley stopped by Jeff\'s Fireworks to stock up on supplies ahead of the holiday weekend. Kelley said she loves lighting off fireworks on her rural property, where there aren\'t any local ordinances restricting when she can fire them. 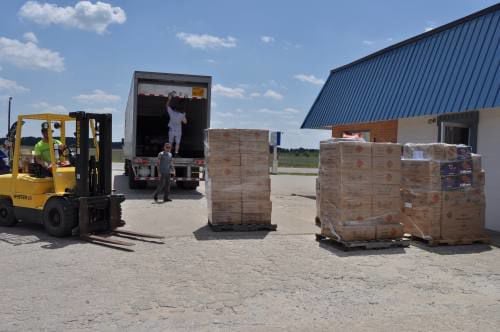 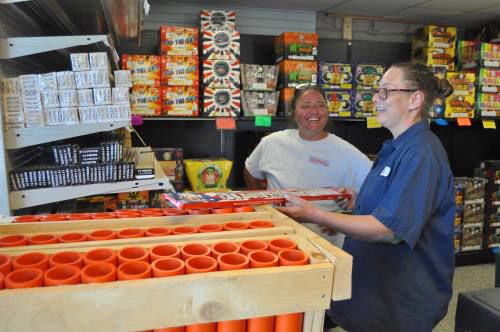 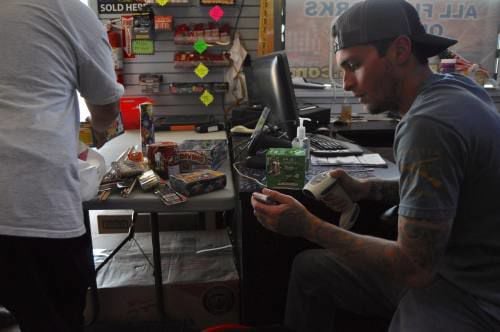 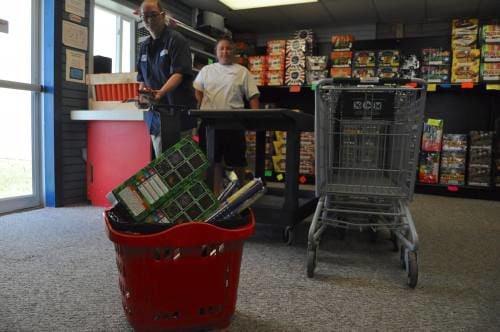 From right, Jeff\'s Fireworks sales associate Miranda Salom helps customer Mary Kelley stock up on fireworks ahead of the July 4 weekend. Pictured in the foreground is Kelley\'s shopping cart.

Marion resident Mary Kelley stopped by Jeff\'s Fireworks to stock up on supplies ahead of the holiday weekend. Kelley said she loves lighting off fireworks on her rural property, where there aren\'t any local ordinances restricting when she can fire them.

From right, Jeff\'s Fireworks sales associate Miranda Salom helps customer Mary Kelley stock up on fireworks ahead of the July 4 weekend. Pictured in the foreground is Kelley\'s shopping cart.

CADILLAC — Fireworks retailers across the country say 2020 is shaping up to be a banner year, even while major festivals and Independence Day celebrations announce their cancellations amid concerns about the spread of COVID-19.

According to the American Pyrotechnics Association, consumer fireworks retailers have reported that sales are off to a record-breaking start.

“The APA predicts an all-time high in backyard consumer fireworks sales and use as families prepare to celebrate Independence Day at home due to the pandemic and cancellation of large public celebrations,‘ said Julie Heckman, executive director of the APA.

Backyard fireworks have never been more popular or in demand, according to the APA, which notes that 49 states plus the District of Columbia and Puerto Rico allow the sale and use of some types of consumer fireworks.

At Jeff's Fireworks, in Haring Township, co-owner Jamie Cunmulaj said sales this year have been "significantly" higher than a typical year.

She said nearby fireworks retailers have experienced similar sales upticks as more people choose consumer grade fireworks as a substitution for the professional displays that many festivals had to cancel this year.

On Monday, the Cadillac Freedom Festival was the latest Independence Day event in the area to announce it would be cancelled. The Greatest Fourth in the North and National Cherry Festival — sporting two of the largest fireworks displays in Northern Michigan — also have been cancelled.

According to the APA, those in the professional fireworks display industry have struggled over the last decade while sales of backyard fireworks continue to rise: from 2000 to 2019, the APA reports that professional fireworks display companies saw a more than 50% drop in the amount of material they use, from 50.6 million pounds to 24.1 million. During that same period, backyard fireworks consumption increased 144%, from 102 million pounds to 248 million.

At the time Jeff's Fireworks opened in 2012, when Michigan legalized the sale of consumer fireworks such as firecrackers, bottle rockets and mortar cakes, Cunmulaj said sales were off the charts but eventually subsided as the "newness" wore off.

Over the years, however, Cunmulaj said business has remained steady and while their busiest time of year is right now, they're still able to stay open year-round selling fireworks for graduations, weddings, birthdays, anniversaries, gender reveal parties, New Year's Eve events, and basically anything involving a celebration or holiday.

Marion resident Mary Kelley stopped by Jeff's Fireworks on Tuesday to stock up on supplies ahead of the holiday weekend.

Kelley said she loves lighting off fireworks on her rural property, where there aren't any local ordinances restricting when she can fire them. She said she especially loves shooting them off in the wintertime.

Cunmulaj said the most popular items in the store are canister shells, which people buy to refill cylinders set up as launching pads for their fireworks.

While people seem to love being able to buy larger fireworks, Cunmulaj said it's also important to handle them safely — a lesson she drills into her sales staff, who in turn pass their knowledge on to customers.

"With anticipated record-breaking use this Fourth of July, especially by families who may be purchasing fireworks for their first backyard celebration, we want to emphasize the importance of reading the instructions for use and following common sense safety tips when using backyard fireworks as well as obeying local fireworks laws,‘ said APA President Michael Collar.

According to the APA, several critical safety tips to always keep in mind include discharging fireworks from a hard, flat, level surface; never holding aerial or reloadable tube devices in your hand as they are safe when discharged from a hard, level surface but extremely dangerous when suspended in the air; never allow children to handle fireworks — even sparklers can be unsafe when not used properly; and always have a sober, responsible adult in charge of all fireworks activities.