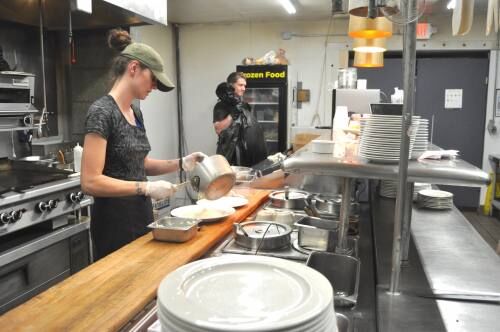 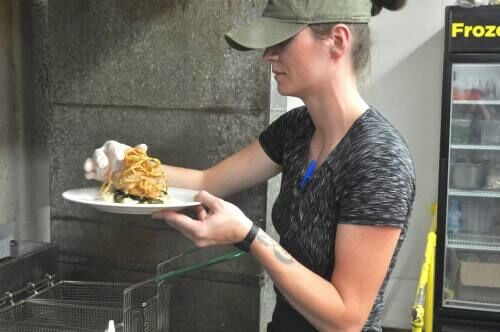 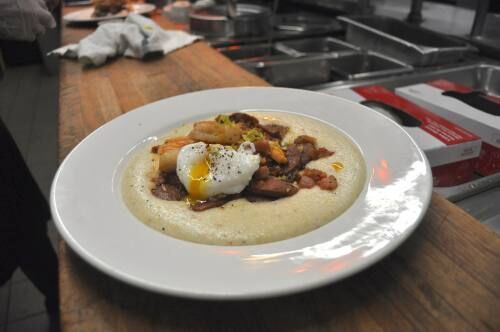 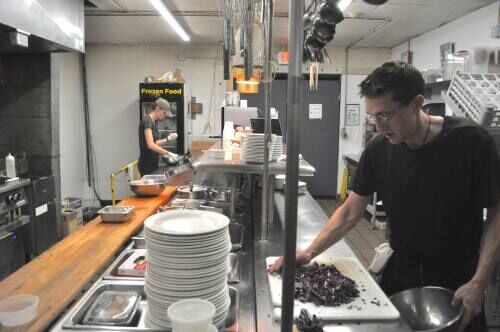 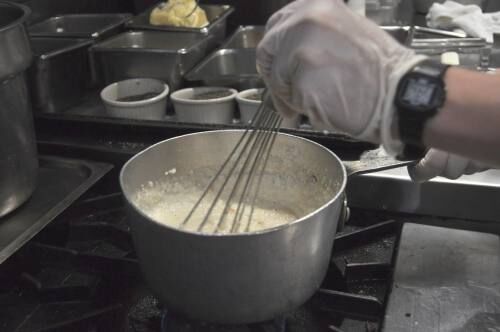 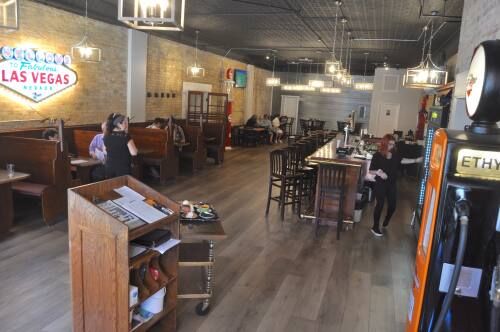 In the coming weeks, Kacey Olmstead said they\'ll be making some big changes to the restaurant\'s interior decoration scheme, showcasing metalworks, paintings, sculptures and other artwork from local artists, including students at Cadillac High School.

In the coming weeks, Kacey Olmstead said they\'ll be making some big changes to the restaurant\'s interior decoration scheme, showcasing metalworks, paintings, sculptures and other artwork from local artists, including students at Cadillac High School.

CADILLAC — After a rocky first couple of months under new ownership, the Cadillac landmark Hermann's European Cafe is ready to begin the next chapter in its storied history, as the Elevation Bistro and Wine Shop.

Mike Blackmer, who with business partner John Kulhavi purchased the downtown restaurant from Hermann Suhs earlier this year, has brought in a new chef and leadership team after a recent staff shakeup.

Blackmer said the transition from Suhs to himself was tumultuous and led to the departure of all but three of the original staff members.

"Did we do everything perfect? No," Blackmer said. "It has not been perfect but we feel we're headed in the right direction. We're looking forward and we're excited. We think Cadillac will like what we have to offer."

"They have to make their own decisions," Suhs said in regard to the employees who left after he sold the business to Blackmer. "Whenever there's an ownership change, people sometimes need change, as well. I have not seen in life where you don't have mistakes ... it's when you don't learn from them that it becomes a problem."

As part of the sale, which was finalized in January, Blackmer and Kulhavi took over ownership of the restaurant and three other adjoining businesses — Opa's Butcher Shop and Wine Shop, Table 212 Wine Bar, and Hermann's Hotel.

Following the purchase, Blackmer and Kulhavi made a number of updates to the building, including extensive renovations, upgrades to plumbing, replacement of floors that were uneven and collapsing, and relocation of the bar, among other expenditures to the tune of around $250,000.

While the initial plan was to keep the Hermann's name and many of the original recipes, with Suhs no longer involved in the restaurant on a day-to-day basis, Blackmer said it just didn't make sense to continue with the same brand.

"This place needed a change," Blackmer said. "When it comes right down to it, we're not Hermann. For the most part, people have been accepting of the change. We think it's going to pay off."

Spearheading the new direction of the restaurant are chef Kacey Olmstead and manager Heather Kraszewski.

Before coming to Cadillac, Olmstead worked as a chef for a catering service and also as a saute chef for the Great Outdoor Restaurant in High Springs, Fla.

The new name — Elevation Bistro and Wine Shop — was brainstormed by Olmstead and Kraszewski to reflect the "rise of new beginnings, new culture and support for the local town," Olmstead said.

"We want to keep that community involvement that Hermann's was known for," Olmstead. "We're just taking a little different approach."

In the coming weeks, Olmstead said they'll be making some big changes to the restaurant's interior decoration scheme, showcasing metalworks, paintings, sculptures and other artwork from local artists, including students at Cadillac High School.

In addition, Olmstead said they'll be looking to book musicians to perform on a regular basis in the restaurant's pub.

The menu also will reflect the new direction of the restaurant: while Olmstead said they'll be keeping some of Hermann's most popular European-style dishes, including his famous morel soup, the remaining dishes have been crafted to satisfy a wider range of palates.

An example of one of Olmstead's southern dishes is "Chef Kacey's House Grits — Creamy smoked gouda grits, shrimp, kielbasa sausage and cubed ham all cooked in tomato gravy sauce with tomatoes, onion, celery and garlic. Topped with a poached egg and served with toasted baguette slices."

Another dish that Olmstead is excited to introduce to the Cadillac community is her chicken piccata — "chicken breast dredged with white wine, lemon butter and capers. Served over a bed over angel hair pasta with a side of toasted baguette."

Olmstead said they'll be keeping the Thursday sushi nights and will be opening up a soup bar when the weather gets a little colder.

Ultimately, Olmstead said she wants to create an inclusive, family atmosphere not just for patrons who come in for a meal but also for staff, who she plans to consult with on a regular basis about dishes they'd like to see at Elevation.

"This doesn't always have to stay the same," Olmstead said. "We want people to come in and be surprised by what we have to offer. We want to make people happy."

Blackmer said the signage and awnings over the restaurant will be updated within the next several weeks.

For more information and to see a full menu, check out Elevation Bistro and Wine Shop on Facebook.