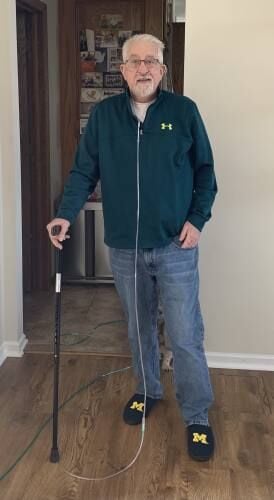 Patrick Smith is pictured with his new cane. Up until recently, Smith was only able to get around with a wheelchair or motorized scooter. 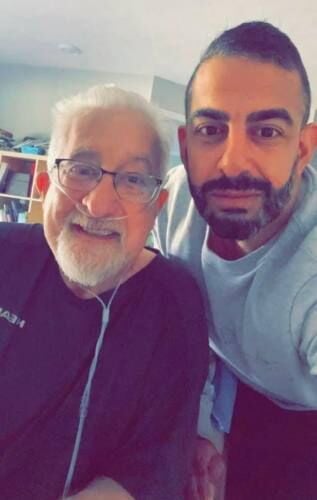 Patrick Smith is pictured with Dr. Rashad Farha, who met up with Smith on his way to Chicago recently. Smith and Farha developed a close friendship following Smith\'s hospitalization with COVID-19 in the Upper Peninsula last fall. 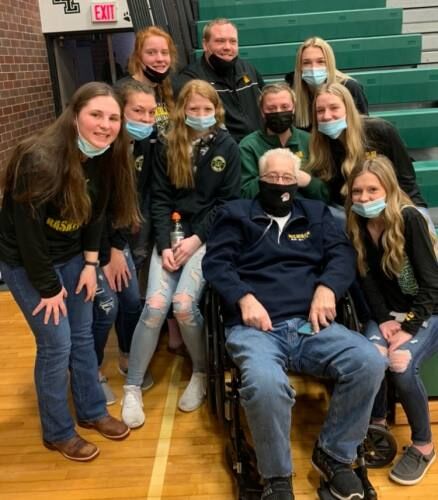 Patrick Smith recently attended a McBain basketball game against Glen Lake. Smith said he was nervous to attend a public gathering for the first time since October but the outpouring of support from the community quickly melted those nerves away.

Patrick Smith is pictured with his new cane. Up until recently, Smith was only able to get around with a wheelchair or motorized scooter.

Patrick Smith is pictured with Dr. Rashad Farha, who met up with Smith on his way to Chicago recently. Smith and Farha developed a close friendship following Smith\'s hospitalization with COVID-19 in the Upper Peninsula last fall.

Patrick Smith recently attended a McBain basketball game against Glen Lake. Smith said he was nervous to attend a public gathering for the first time since October but the outpouring of support from the community quickly melted those nerves away.

ZEELAND, Mich. — The idea of going to a public gathering was nerve wracking for Lake City resident Patrick Smith, who hasn't been out and about since last fall.

When Smith recently attended a McBain basketball game against Glen Lake with his son, Lucas, and longtime friend Ron Doll, however, that nervousness quickly melted away with every greeting and word of encouragement offered by community members and students who were excited to see the former McBain elementary school principal again.

"I think I did well," said Smith, who added that even family members of Glen Lake players sitting on the opposite side of the gym gave him a standing ovation when he arrived. "People have been so loving and supportive."

In October, Smith fell ill with COVID-19; he was bedridden for several weeks and nearly died from the disease but was brought back from the brink through the efforts of a downstate doctor who through happenstance arrived at the hospital just before Smith was to be put in hospice care.

Dr. Rashad Farha — a specialist in inpatient medicine who is responsible for managing the care of patients at War Memorial Hospital, where Smith was hospitalized — developed an unorthodox treatment strategy involving massive doses of steroids to shut down Smith's immune system in order to bring his lung inflammation down.

The use of steroids to treat COVID-19 has had mixed results in the past, with evidence at the beginning of the pandemic showing that in some cases, it does more harm than good. In a case such as Smith, however, Farha said he believed it could work because he was relatively healthy before he developed the disease and the damage in his lungs wasn't to the point where it was irreversible.

Within a couple of days after being on the new treatment, Smith started to show signs of improvement. Within a week, they reduced the amount of oxygen he required to breathe from eight liters to four liters.

"We're praising God for a miracle," said Lucas at the time. "We were planning for the worst ... now we're celebrating the best."

While the immediate threat of death was averted, for Smith, the battle was just beginning: over the next several months, the 66-year-old fought to regain his health, first in a rehabilitation facility in Hudsonville, then at the Zeeland home of his son, where he is still staying today.

During his stay at the rehabilitation facility, Smith said he struggled to perform even the most basic functions himself, such as using the bathroom or taking a shower; merely sitting up in bed and getting into his wheelchair took a heroic effort.

"It was unbelievable how gone my body was," said Smith, who was bedridden for 50 days and lost 50 pounds during the peak period of his illness. "I was close to death."

Shortly after he arrived at the rehab facility in Hudsonville, Smith said he was worried that if Farha was no longer directly involved in his treatment, his progress might falter.

"I experienced anxiety and panic," Smith said. "It was awful ... it absolutely shut me down. I didn't make terribly great gains."

Eventually, Smith found a new primary care doctor in the Zeeland area who prescribed him anti-anxiety medication, which has done wonders for this mental well-being and given him the confidence to devote himself once again to rehabilitation.

"About two weeks ago, things started to turn around," said Smith, who up until recently was only able to get around via a wheelchair but now walks with the aid of a cane.

"I went up and down the stairs, which just about killed me," Smith laughed. "I can walk with the cane but not long distances. While in the grocery store, I use the motorized Amigo ... But it's encouraging me to work and get stronger. I've been growing accustomed to having three liters of oxygen (as opposed to five, which is what he had been using for some time). I'm working toward possibly not needing any oxygen at all. I've been making good progress of late, so I'm pretty pumped."

Given the toll that COVID-19 took on his lungs, Smith said he's discussed the possibility of having a lung transplant but his pulmonologist told him that he thinks he would be better off keeping his existing lungs, which could regain much of their original functionality with time. He added that lung transplants are quite risky and can lead to drastic cuts in life expectancy for recipients.

Smith said he's hoping to eventually replace the oxygen tanks he's currently using with a mobile oxygen concentrator that can be slung over his shoulder.

"It would be a nice, intermediate type of situation (between an oxygen tank and no oxygen)," Smith said.

In addition to the strides he's made in his mobility and oxygen use, Smith said he's been much more active around the house, cleaning up, playing piano and cooking dinner some nights.

"My therapists keep telling me to be patient and slow down," Smith said. "But I'm not that kind of person. I still have a long way to go but have certainly been blessed by my Lord. Being faithful has helped me get through this. It's been a long journey."