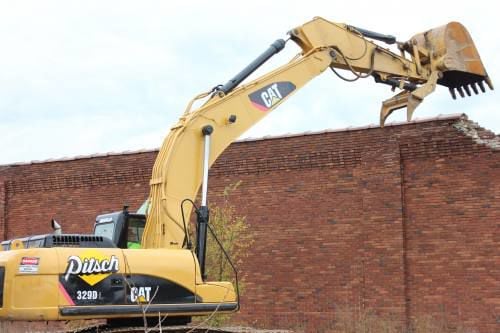 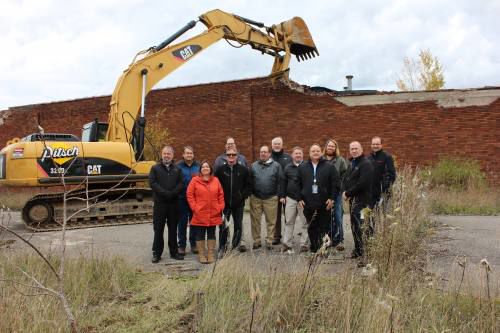 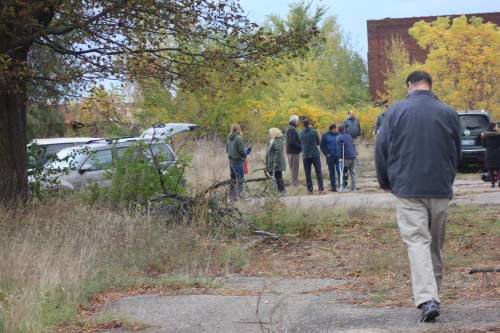 CADILLAC — The eyesore caused by a mysterious fire could be cleaned up by this time in December.

Once the rubble and debris is pulled away from the Mitchell-Bentley site and deposited into the landfill in Wexford County, something new will be “planted‘ there instead: solar panels, meant to harvest sunshine to power city municipal buildings.

“It’s a really creative solution to a problem and that’s fun to be a part of,‘ said Eric Baker, president and CEO of Wolverine Power. “That’s very, very rewarding.‘

Community leaders, state workers and consulting crews were on hand Tuesday morning for the official launch of the clean-up effort at the Mitchell-Bentley site on Wright Street.

“It’s more important, I think, for those in the community to really get an understanding about the fabric of the collaboration, and the spirit of the collaboration that was involved in making all of this a reality,‘ Peccia said before introducing those representatives, who likewise stressed the collaborative efforts that led to the city receiving the funds to go forward with the project.

At the end of their remarks, an excavator operated by Jeff Rogers of Pitsch Companies out of Grand Rapids knocked down part a brick wall still standing at the old factory. The plant hasn’t been operational since 1989 and entered “eyesore‘ status in 2013 after a fire.

The fire left an estimated 9,000 cubic yards of asbestos-containing debris. The soil is contaminated, and some buildings are still standing but unusable.

It all has to go — but making it go away costs money, of course. The city received a $700,000 Brownfield Redevelopment Grant from the Michigan Department of Environment, Great Lakes and Energy and a $300,000 loan from the same agency to clean up the site.

Otwell Mawby of Traverse City will provide overall project management and monitoring in conjunction with Fishbeck, Thompson, Carr and Huber of Grand Rapids, the city said in a news release.

The clean-up will clear the way for the next chapter in the Mitchell-Bentley site’s story: a solar garden.

While it’s Consumers Energy that will pony up the $700,000 to install a solar garden along the southern part of the property that follows Wright Street, the idea for a solar garden at the Mitchell-Bentley site came from another power company altogether.

“One of our objectives at Wolverine is supporting the communities that we’re part of,‘ explained Baker, who says he became aware of the Mitchell-Bentley project through his involvement with the Cadillac Industrial Fund and tapped Wolverine employees to come up with a solution.

“We pitched this concept to Consumers and also to the Brownfield Authority, now EGLE, to see if we could use this development, then, as the lever to get the Brownfield Development Fund,‘ Baker told the Cadillac News.

It worked — Consumers signed on, the city got the funds (and agreed to power city buildings with the solar power) and the project went out to bid.

Construction crews will be clearing the Mitchell-Bentley site for the next couple of months; Consumers is expected to install the solar garden in the spring.

What happens after that is still uncertain, in part because no one knows for sure how much rubble and debris is on site.

The site will at least be cleaned up enough for the solar garden to be installed, but the northern part of the property might get additional work if there’s money leftover.

The hope is that the northern part of the property will once again be used for an industrial purpose.

“We’re very happy to partner with the city and EGLE to make a better use for this site and we hope that our participation helps with gaining a tenant that provides for the environment and the economy of Michigan as well,‘ said David Petrie, who works in Consumers Energy’s Renewable Energy Division.

“It is the single largest industrial site in the city of Cadillac and it has infrastructure, so I don’t think it’s gonna be long before we see something,‘ said Cadillac Area Chamber of Commerce President David Miller. “Obviously, the condition of it scares people away. Once it’s cleaned-up, it’ll be a different ballgame.‘