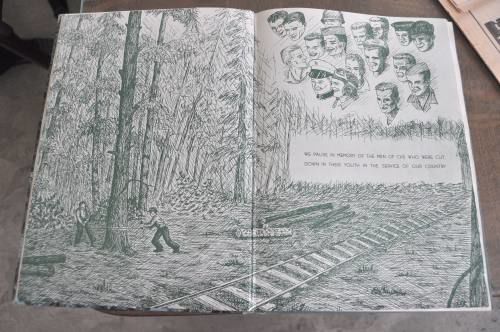 Pictured is a 1945 Cadillac High School yearbook honoring those who died in the war. 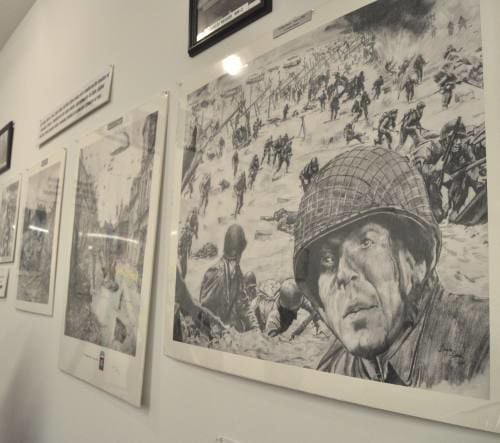 Pictured is an artist rendering of the D-Day invasion. This piece is hanging at the Manton Veterans Memorial Museum.

Pictured is a 1945 Cadillac High School yearbook honoring those who died in the war.

Pictured is an artist rendering of the D-Day invasion. This piece is hanging at the Manton Veterans Memorial Museum.

On June 6, 1944, the nation was gripped with an energizing apprehension as news filtered through cities, towns and communities that the allied forces had invaded German-occupied France.

This was a time before 24-hour news availability, so people hung on every scrap of information they could find regarding the invasion, dubbed D-Day.

In Cadillac, the Cadillac Evening News printed a special edition when information started coming in from the battlefront.

“News of the invasion hit Cadillac shortly after midnight when the Evening News was notified by the United Press in Detroit that German reports stated the allied had landed on the European continent,‘ reads a special notice printed that day in the paper.

“The teletypes were turned on and fragmentary reports out of Germany were received over the transocean radio system ... and relayed on their trunk wires. No confirmation from allied sources was obtainable until at 2:30 a flash came ‘Officially allied troops landed in France.’ A skeleton force was hastily recruited and an extra edition was issued at 5:45 a.m., was distributed to the regular subscribers by carrier.‘

When official notice of the military action arrived in Cadillac, the waterworks air-warning siren was sounded and factory whistles were blown for 90 seconds, the signal for one minute of contemplation and prayer, according to Cadillac Evening News accounts.

Pvt. Carl T. Johnson, who resigned the office as mayor of Cadillac to join the army a year before the invasion, wrote from his base at Camp Polk, Louisiana, urging the citizens of his home city to respond to the Fifth War Loan.

“Cadillac will set the pattern for the nation,‘ Johnson wrote. “You have given of your youth and your money. You believe in liberty and realize it to be of such inestimable value that no price will be too great to pay for victory. In this Cadillac is united. In this there can be no argument. The Fifth War Loan is a phase of D-Day. The spirit in the army is reflected in the spirit at home. D-Day will truly come. Victory will be ours. It may be longer than we think. It can be shorter if we give. The boys from Cadillac will not fail you and they know you will not fail them.‘

At the high school, the excitement of commencement week was tempered by the somber reality of the war.

“The outlook on life out of school has held a more serious aspect than in years gone by, a good deal of the gaiety and frivolity lacking, as many of the members will enter the armed forces in service of their country.‘

As pictures from D-Day began making their way to local papers, family member sometimes would catch glimpses of their loved ones.

“One of the men in a group photo of wounded soldiers on the invasion front was identified today by Mrs. J.P. Loughrin of East Pine Street as her son Robert, who was known to be in England with a glider outfit,‘ the Cadillac Evening News reported. “The identification was first made tentatively in Washington by Joseph, a brother, and checked here. The wounded man was wearing a bandage around his head and one forearm was wrapped but he was apparently not very seriously injured.‘

As painful as it was to read about or see loved ones hurt or in danger, the Cadillac community remained positive and even made plans for eventual victory.

“The Retail Division of the Chamber of Commerce in their meeting last night named a committee to make plans for celebrating and allied victory over Germany when it comes about, and announced suggestions from interested people will be appreciated,‘ it was reported days after the invasion started. “It was decided to contact the City Commission with regard to resetting the flagpole sockets in the sidewalks so that cars will not break them off, and a proper display of flags can be made on patriotic occasions.‘

Perhaps the most vivid accounts of how the invasion affected people in this area came years later, when veterans who were there on that day told their stories.

Sgt. John VanderMeulen, of Falmouth, was in the first landing wave just to the left of 5th Ranger Battalion, which was to attack Point-Du-Hoc.

“As we were approaching closer to the beach, mortar shells were bursting around us and as our landing craft came to a stop due to the obstacles in the water about 75 yards from the beach,‘ VanderMeulen wrote in a Cadillac News article 50 years after D-Day.

“We were struck by enemy artillery shells which blew out the side of our boat, killing several of my buddies and I was wounded to the extent that I could not walk. Because we were wearing life belts, I was able to float to the sand and the beach. During the day a medic from the 5th Ranger Battalion examined me and gave me a shot of morphine to ease the pain. After darkness in the evening the Germans bombed the beach and also attempted to bomb some ships in the Channel. Next morning enemy fire subsided somewhat and more bulldozers were landed to help clear the path going inland for the tanks. As they were clearing the path they came close to me but did not run over me as they did many bodies lying there. At about noon next day the medics were walking over the beach to find individuals who were still alive and I happened to be one of them.‘

Cadillac resident Robert Loughrin told of his experience as an infantry sergeant in the 82nd Airborne Infantry Division.

“Our company mission was to destroy several bridges and railroad crossings in order to hamper the enemy from hurrying to the beaches to stop our infantry from landing at Omaha and Utah Beaches,‘ Loughrin wrote.

“Normandy was covered with hedgerows which served as fences. These hedgerows were a form of vine about two or three inches thick and a hedgerow was about five feet thick. You could not cut your way through them. We had to use tanks to get through. One of our bloodiest battles, early in Normandy, was at the La Fiere Causeway over the Merederet River. The Causeway had to be taken, right now, regardless of loss of lives. During this attack you were forced to walk on bodies of your buddies and the enemy, a sight you will never forget.‘