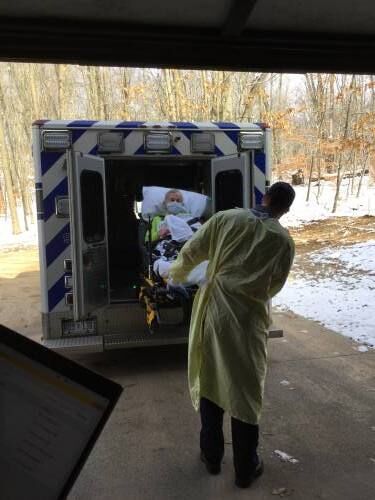 "This was Wednesday afternoon coming home from hospital by EMS," writes Maegan Neely about her grandmother, Sue Spakowski. 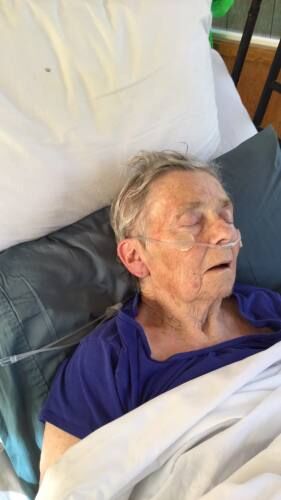 "This afternoon, unable to get out of bed, speak, or receive liquids," wrote Maegan Neely, of her grandmother, Sue Spakowski, on Friday. 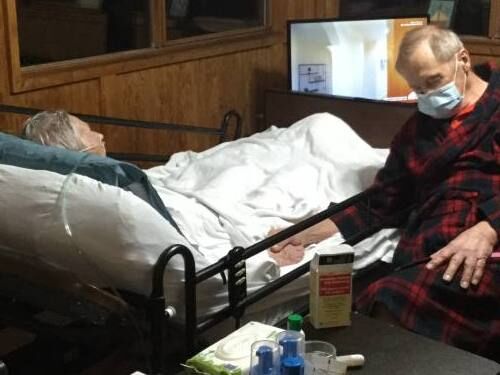 "Just taken," wrote Maegan Neely on Friday night, of her grandparents, Sue and John Spakowski. "Love birds married 57 years spending what could be their last moments together." 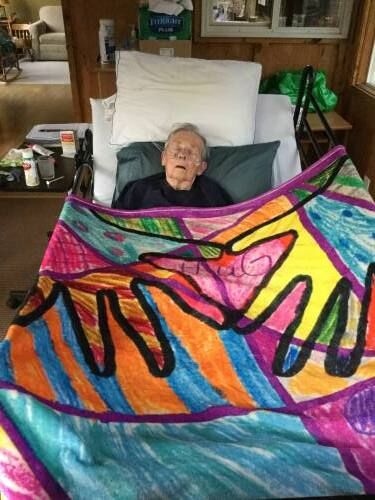 "This is the only way for her to get a hug from every family member before she passes," wrote Maegan Neely, about her grandmother, Sue Spakowski.

"This was Wednesday afternoon coming home from hospital by EMS," writes Maegan Neely about her grandmother, Sue Spakowski.

"This afternoon, unable to get out of bed, speak, or receive liquids," wrote Maegan Neely, of her grandmother, Sue Spakowski, on Friday.

"Just taken," wrote Maegan Neely on Friday night, of her grandparents, Sue and John Spakowski. "Love birds married 57 years spending what could be their last moments together."

"This is the only way for her to get a hug from every family member before she passes," wrote Maegan Neely, about her grandmother, Sue Spakowski.

Jen Neely, daughter Maegan and parents John and Sue Spakowski have all been diagnosed with COVID-19. The multi-generation household lives in LeRoy and have been coping with COVID since this summer.

On Saturday, they became a household of three when Sue died due to COVID-19.

The family’s experience with COVID-19 was varied.

For John Spakowski, who had a “probable positive‘ for the virus in July, it was a “cakewalk‘ as Jen described it. But in early November, he tested positive again, Neely said.

(Central Michigan District Health Department Medical Director Dr. Jennifer Morse said she didn’t think there had been any reinfections in Osceola County, though she had heard of some in her jurisdiction; “Without genetic testing of viral samples, there is no way to be 100% certain they are reinfections.‘)

“My dad is not one to stay home; he likes to go places and meander,‘ Neely said of her 84-year-old father. “I would assume nine times out of 10 he wore a mask.‘

This time, basic self-care is exhausting him.

“He’s sitting down at the table and he’s falling asleep, trying to eat something,‘ Neely said.

For 22-year-old Maegan Neely, COVID-19 was like being hit by a truck.

Maegan and Jen both got tested on Oct. 30 after hearing that one of Maegan’s close contacts was in quarantine.

Jen’s test was negative at first, though Maegan’s was positive.

Maegan’s symptoms had started a couple of days before getting tested. It seemed a lot like a sinus infection.

Then it got worse.

“My oxygen levels were always fine. I never had a fever. I just laid in bed and laid in bed. And I was still tired all the time,‘ Maegan said.

“She has not bounced back from this yet, and she’s a young, relatively healthy 22-year-old,‘ Jen said.

Jen Neely had a negative test result, but then she started feeling worse.

She was achy. She started to cough more and had a sore throat. She got tested again, and never spiked a fever until after her test results came back positive.

“I still have no sense of taste, no sense of smell. I cannot take a deep breath, without my lungs burning,‘ Jen said. “Going up a flight of stairs is physically exhausting.‘

For Jen, the effects of COVID-19 feel a lot like a broken rib — pretty bad, according to her.

“I will give birth to octuplets before I break a rib again,‘ Neely said in comparison.

So is COVID pain worse than giving birth?

For Sue, Jen’s mother, her COVID-19 diagnosis had the worst possible outcome Saturday.

In and out of the hospital since earlier this month, Sue was receiving hospice care.

Because of hypoxia, Sue, 81, had been confused and sometimes combative, scratching Jen and Maegan, who are caring for her.

She was receiving morphine hourly as needed, Jen said.

As of Friday, Sue had lost the ability to walk or use a straw and was no longer talking.

“Somebody has to sit with her and hold her hand the whole time, because it’s the only way she even tries to relax,‘ Jen said through tears.

Though Sue has COPD and dementia, Jen said the COPD was being managed with two liters of oxygen, usually only at night. By Friday, her oxygen needs had tripled.

“She’s tough, she’s amazing,‘ Jen said on Friday. “Which is why this is so heartbreaking.‘

Jen feared on Friday that her mother had only days left.

“She would have been kicking for at least another couple years,‘ without COVID, Jen said.

On Saturday morning, Sue received last rites through the window. Family members who live outside the home were not able to come say goodbye.

Hours later, Maegan informed the newspaper that her grandmother had died.

“Susan has passed but waiting for time of death to be called by the hospice nurse,‘ Maegan texted shortly after 3 p.m.

The family is begging the community to take COVID-19 seriously.

Recently, Jen wrote on Facebook that she’s so angry, she wants to scream at the world.

“And I do, but it won’t do any good. Unfortunately, people are selfish,‘ Jen said. People don’t realize that “their rights do not supersede the protection rights of others. A mask is not an imposition. The inability to breathe is an imposition.‘

“It’s hard not to think it was your fault because you brought it home,‘ Maegan said.

Jen’s message to the community as Thanksgiving approaches is simple: