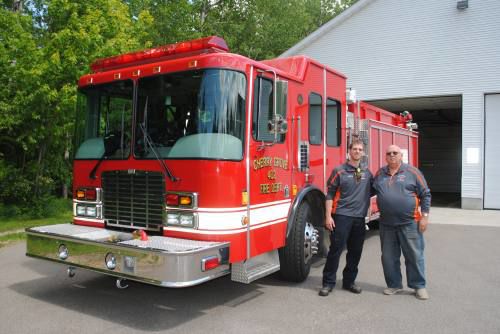 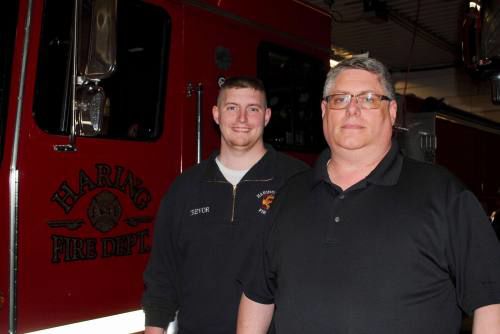 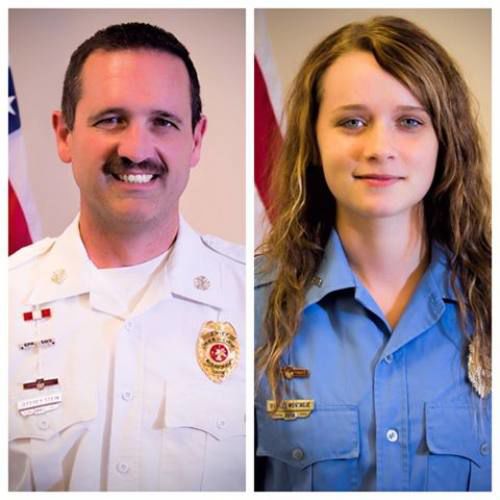 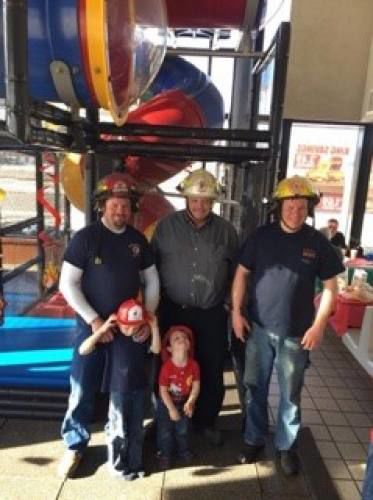 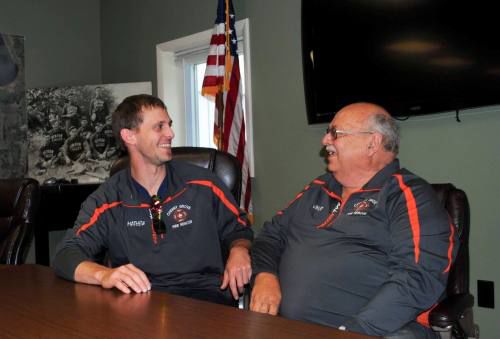 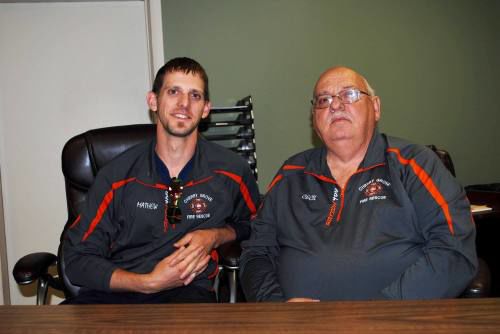 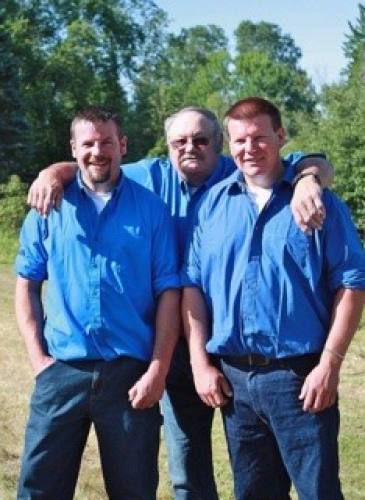 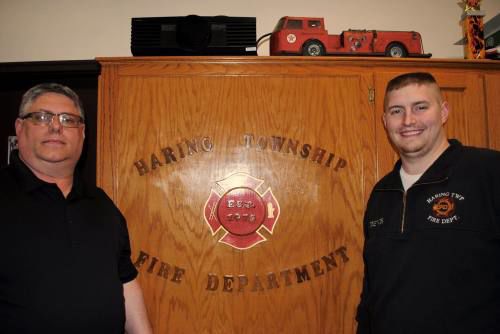 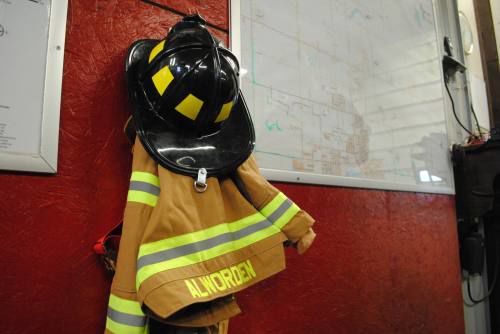 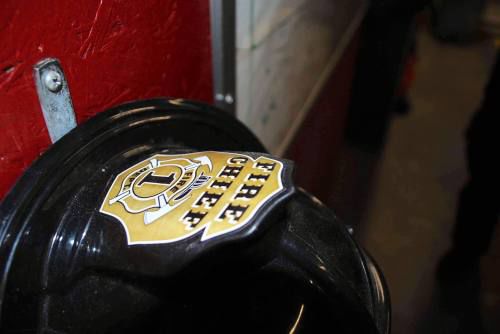 CADILLAC — When he was little, Lt. Mathew Fauble remembers his dad doing lawn work out in the yard when his pager would go off.

His dad would pause, listen to it, and then take off to go fight fires with the Cherry Grove Township Fire Department.

As for Mathew Fauble? He would scamper inside to listen to chatter on the home scanner to hear what his dad was doing.

There’s a special relationship between a father and his kids, but there’s a special dynamic with firefighters and their children. Especially those who grow up to join them on the department.

Mathew Fauble had a childhood ambition to be a firefighter. He wanted to be connected to the fire department where his dad served, and he’s not alone in feeling that.

“There was never a day I thought I’d be without the fire service,‘ said Trevor Alworden, who serves on Haring Township Fire Department with his dad, Chief Duane Alworden.

The Cadillac News spoke to four different fire department dads and their kids about what it’s like to serve with family.

Serving together brings them closer together

He also had fun participating in parades with the firefighters and throwing candy. Riding in the fire truck was always exciting as a kid. Now, being able to get into the driver’s seat makes it that much better.

Mathew Fauble likes being the one to drive up to schools for fun visits or when kids tour the station because when they clamber up into the truck it reminds him of himself at that age, he said.

Back then, when his dad, Cherry Grove Township Assistant Chief Cecil Fauble, would leave to fight a fire, he would worry a little bit. But he trusted his dad’s judgment and knew he was going out there for a reason.

Mathew Fauble doesn’t think he would have joined a fire department if his dad hadn’t been involved in one. He wouldn’t have had the same exposure.

“It’s always kind of been there in my life,‘ he said.

Between work and home life the two never run out of things to talk about at the dinner table. They can bounce ideas off each other and talk about things that might be bothering them, Cecil Fauble said.

“I felt it brings us closer together,‘ he said.

They do it for the community service and “spark of adventure‘

Craig Fisher, Chief of McBain Community Fire Department, said he thinks there is a tendency for many members of the same family to be part of a fire department because they are exposed to it.

“They understand the sacrifices and rewards,‘ he said.

Both of his sons serve on the fire department as well, but the firefighting tradition didn’t start with Craig Fisher.

His dad was also a McBain firefighter and served as a firefighter in World War II at air force bases chasing bombers in England, he said.

His son Carl Fisher has watched his brother, Andy Fisher, walk into fires and knows that he knows enough to be safe. There’s a sense of security being able to watch each other’s backs when they’re at a fire, he said.

Andy and Carl Fisher have been involved in the department since they were “little guys,‘ Craig Fisher said.

When they were little they’d see fire trucks a lot more than other kids, and they knew one day when they were older they’d be able to drive them, Andy Fisher said.

“My whole life I’ve felt like I was going to be a fireman,‘ Carl Fisher said.

The thought of helping people and seeing his dad and his friends do it was awesome and it was something good he could do for his friends and the community.

And, in the heat of the moment during a fire, everything clicks and they look like superheroes, Andy Fisher said.

Having a daughter involved with the department is “extra special‘

The Reed City Fire Department has a history of fathers and kids who work together, including Stein and his daughter, Lt. Brooke Montague.

When she was younger, Montague didn’t really realize that her experience was different than having a “normal dad,‘ she said in an email.

“It wasn’t until I got older that I began to realize that “normal‘ dads didn’t leave at any given moment to go save someone’s life,‘ she said. “That that was something special about my dad.‘

Montague was always around the fire department while she was growing up but didn’t always think she would join the department. She gave a junior firefighter program a shot, but no promises, she told her dad.

After her first structure fire she was hooked. Now, 10 years later, she’s still involved with the department.

Montague was enthusiastic, a go-getter and passionate about it right from the beginning. She was top of her class for being able to get on her breathing apparatus, SCBA, faster than anyone else, including the guys in the class. That was cool, Stein said.

He never discouraged his daughter from joining, but there are certain risks that come with this gig.

When she became an actual firefighter and could go into fires, his fears definitely increased.

There were his “dad’s concerns‘ but there was also the officer concern, and the struggles of learning how to balance a daughter/father and lieutenant/chief relationship.

Stein said there was a line that had to be drawn in the sand. He wouldn’t treat her differently and if he had to take disciplinary action toward her she would know it was being taken appropriately.

Montague is currently on maternity leave and hopefully will have a little “firecracker‘ in July after she gives birth. For the gender reveal they had people gather at the firehouse and sprayed pink colored foam out of a fire hose, Stein said.

“I have zero expectations of my daughter joining the fire department unless it’s something she also shares a passion for,‘ Montague said. “But I would be lying if I said it wouldn’t make me very proud if she followed in her grandfather and I’s footsteps.‘

Stein would like to think his granddaughter will be interested in the department, but it’s up to her and his daughter. He said he wants to get her pink turnout gear, though.

It’s hard when dad’s not there anymore

If you peek inside the Haring Township Fire Department garage, you’ll see a miniature set of turnout gear hanging up with the name “Alworden‘ stitched on the back.

That gear is for Trevor Alworden’s son, the fourth generation of Alworden to be involved in the department.

Being involved in the fire department is a family affair for the Alwordens. Duane Alworden, his wife, his daughter, Trevor Alworden and his wife are all a part of it.

Duane Alworden’s dad served on the department for 30 years and he always knew he would be a part of the fire department.

“I wanted to follow my dad and I wanted to work side by side with my dad,‘ he said.

Trevor Alworden said he has only spent two days away from the fire department, the first two days he was alive.

It was exciting for him to see his dad take the trucks out to go fight a fire. When they did he would sometimes go and watch them at the fire. He could pick out his dad and some of the other firefighters he knew and see what they were doing.

He was proud to be able to say that his dad was the fire chief of a local fire department, but there were some parts that weren’t as fun.

When he was a younger he played football. His dad would be there at the beginning of the game, but when Trevor Alworden came off the field he’d be gone. He would ask his mom where he went and she would say that he had to go on a call.

“It was rough because I wanted him to be there for the full game and watch me play,‘ he said.

But he understood that his dad had to go and it probably wasn't fun for him either having to leave his son's game to go do this. But he had to help someone in need.

Trevor Alworden said he can't think of how many holidays and family dinners that multiple members of the family have been gone because they had to go to a fire call. But when they returned from a call, the food was always warm for them.

This will be the first Father's Day Duane Alworden will have without his father, who passed away in April. It will be a hard weekend for him.

Duane said people get wrapped up in their own little world and forget about their family.

“The world will always be there,‘ he said. “The family won't be.‘