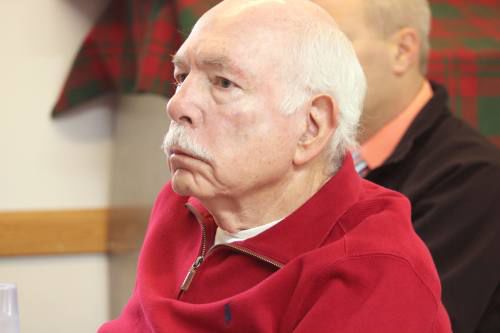 Manton Mayor Gary Brown listens as the future of Viking Energy of McBain is discussed during an impromptu meeting held at the North Side Restaurant in Manton Tuesday. 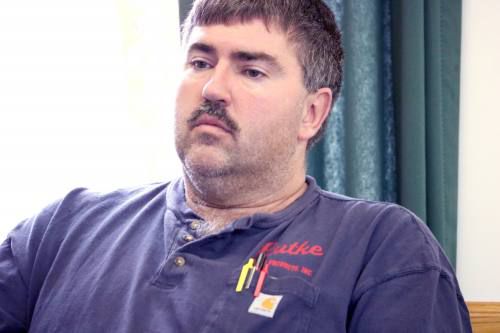 Lutke Forest Products owner Jason Lutke talks about how the closing of Viking Energy of McBain could impact his business and employees during an impromptu meeting in Manton Tuesday morning.

Manton Mayor Gary Brown listens as the future of Viking Energy of McBain is discussed during an impromptu meeting held at the North Side Restaurant in Manton Tuesday.

Lutke Forest Products owner Jason Lutke talks about how the closing of Viking Energy of McBain could impact his business and employees during an impromptu meeting in Manton Tuesday morning.

MANTON — School officials, city and township government officials, business owners, foresters from the Department of Natural Resources and loggers all convened at the North Side Restaurant in Manton Tuesday morning for the same reason.

An impromptu meeting was held to discuss a Nov. 21 decision made by the Michigan Public Service Commission and steps that could be taken to influence state legislators to step in and make a change.

The fear is if voices are not heard, all of those who attended the meeting on Tuesday and Northern Michigan as a region would have a lot to lose.

Small energy producers like Viking Energy of McBain could go out of business because of the MPSC decision. It also could have similar implications for other co-gen plants in Cadillac, Grayling and others across the state. During the meeting where Viking Energy Regional Fuels Manager Don Adams talked about the situation, Manton area business owners and loggers like Jason Lutke as well as Manton Consolidated Schools Superintendent Len Morrow talked about the “trickle-down” effect that the closing of the co-gen plants could have on the Manton community.

That included the loss of jobs in the logging industry, leading to families leaving the area to find work and ultimately resulting in lower school enrollment, leading to more layoffs within the school system.

Adams said as a region, Northern Michigan can’t afford to lose any more jobs, and it will be up to the people, businesses and organizations to act or there will be no option for Viking Energy of McBain other than to close its doors after 30 years.

The reason that the Viking Energy and other co-gen plants could be closing by Jan. 1, 2019, revolves around how much Consumers Energy should pay smaller energy producers.

Under the Public Utilities Regulatory Policies Act, or PURPA, a 1978 federal energy law meant to help the country get energy from different kinds of facilities, big utilities like Consumers Energy are supposed to buy energy from smaller producers. Those producers generate power through diverse means such as solar, wind or burning timber byproducts, like Viking Energy.

But buying energy from the smaller producers isn’t supposed to cost the utilities more money than they’d pay if they just produced the energy themselves, so the Michigan Public Service Commission is in charge of setting rates for those avoided costs.

The problem for Viking Energy, however, is that the new math will slash the rate by up to 40 percent, according to a news release from the Independent Power Producers Coalition.

“Michigan customers have subsidized small renewable energy producers by approximately $300 million over the last 10 years,” the company stated before the commission made its decision.

Contracts between the smaller energy producers and the big utilities based on rates set by the commission can last for decades.

“They want to pay us less than what it costs to make the power — 40 percent less,” Viking Energy in McBain Plant Manager Tom Vine said.

Independent Power Producers Coalition objected to the new method of calculating the rate because it uses “an unrealistic mashup of two different technologies that have not been built, resulting in unsustainable low rates that will force many small power generators to close,” according to a news release after the commission’s decision.

But Consumers Energy says the change was necessary because the market has changed.

The rates had been calculated based on the costs of running a coal plant, but the new prices will be based on natural gas plants, which include combined cycle plants and combustion turbine power plants, according to a press release from the Michigan Public Service Commission.