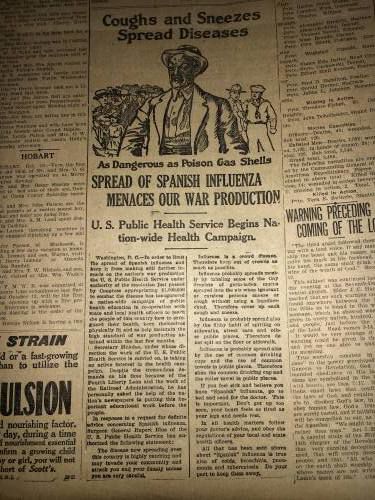 Pictured is a notice printed in the Cadillac Evening News giving tips on avoiding the Spanish flu. 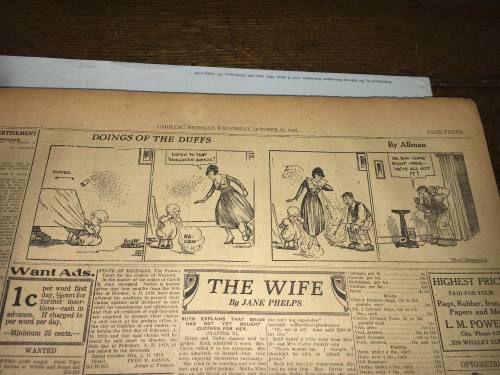 Pictured is a comic printed in the Cadillac Evening News poking fun at the panic surrounding the Spanish flu pandemic.

Pictured is a notice printed in the Cadillac Evening News giving tips on avoiding the Spanish flu.

Pictured is a comic printed in the Cadillac Evening News poking fun at the panic surrounding the Spanish flu pandemic.

CADILLAC — In many ways, people living 100 years ago would have little in common with people living today, save perhaps one thing — dealing with a global virus pandemic that affects nearly every aspect of daily life.

Days before COVID-19 reached Michigan, the Cadillac News reported on the flu season of 1919, which caused schools, churches and public gatherings to be shut down. While that year was bad enough, the year preceding it was by all accounts much worse.

During the leadup to the end of World War I, the Spanish flu spread across the globe and before the pandemic fizzled out, an estimated 50 million people died worldwide, including 675,000 in the U.S., according to the Centers for Disease Control and Prevention.

With the Spanish flu, which turned out to be an H1N1 virus with genes of avian origin, mortality was high in people younger than 5 years old, 20-40 years old, and 65 years and older. The high mortality in healthy people, including those in the 20-40 year age group, was a unique feature of this pandemic.

Fortunatly, COVID-19 it doesn't seem to have the same health risks for young people as did the Spanish flu, although its impact on the elderly is similar.

While no deaths have been reported in this area stemming from COVID-19 infection, many people died from the Spanish flu, including a number of children.

The Cadillac News scanned death records at the county clerk's office and found 88 people died in Wexford County from flu-related illnesses from October 1918 into April 1919.

As the virus moved from country to country and city to city, residents of Northern Michigan were kept abreast of the situation by Wexford County Health Officer Dr. D. Ralston.

In early October 1918, Ralston reported that "so far as I have been informed or have observed there is at the present time no case in this city of what the newspapers refer to as Spanish influenza." Ralston continued by saying that "this Spanish influenza is a repetition of the affliction of many years ago that was first called the epizootic, and under a changed form came later to be known as the earlier stages of the 'grippe.' About as good a remedy or antidote as I could suggest would be quinine and aspirin taken in doses usually required to 'break up' a common cold."

While Cadillac was for the time being spared from the pandemic, other cities in the U.S. weren't faring so well.

"Spanish influenza is sweeping through the big cities and the army camps," the Cadillac News reported on Oct. 4. "More than 175,000 soldiers and civilians are now suffering with the malady, reports at hand today make known ... Boston is the worst afflicted city in the country with 30,000 cases and with a total of 1,912 deaths up to noon today."

It didn't take long for the virus to reach Michigan and when it did, the first two counties to ban gatherings were Berrien and Jackson. Within 24 hours of the virus first being discovered in the state, 1,000 new cases had developed.

It is unclear from Cadillac Evening News archives when the virus was first discovered in the city but a notice on Oct. 19 indicated that it was here but "not yet bad."

"There have been a number of new cases of influenza reported in this city throughout yesterday and this afternoon," said Ralston on Oct. 18, "but it hardly seems necessary as yet to take any action in the way of prohibiting gatherings. The physicians of our city are giving good advice in the way of isolating patients and matters appear to be going as well or better here than in any other city in this section of the state."

Ralston's tone would change a day later, however, when Michigan Gov. Albert E. Sleeper declared an end to all gatherings and conventions of people until the pandemic was brought under control.

"There will therefore be no further shows until further order is made, the churches of the city will be required to remain closed tomorrow and thereafter, and my present expectation is that the schools of the city will be closed throughout the coming week," Ralston told the Cadillac Evening News.

Health authorities offered similar tips to people on how to reduce spread of the disease as they do today with COVID-19, although at the time the practice wasn't called "social distancing" and the advice didn't attempt to spare anyone's feelings.

"Influenza probably spreads mostly by inhaling some of the tiny droplets of germ-laden mucus spraying into the air when ignorant or careless persons sneeze or cough without using a handkerchief," read a notice published by the U.S. Public Health Service. "Influenza is probably spread also by the filthy habit of spitting on sidewalks, street cars and other public places."

Also like today, there were frequent (and often spurious) claims being made about all manner of miracle treatments for the flu.

"Foley’s Honey and Tar is just what every sufferer from influenza or la grippe needs now," read an advertisement in the Cadillac Evening News. "It covers the rough inflamed throat with a soothing healing coating, clears away the mucus, stops the tickling and coughing, eases the tightness and heavy breathing ... It gives ease, warmth and comfort from the very first dose." Another advertisement claimed that to regain strength after the flu, people needed to have their blood "purified." "For this purpose physicians know of no more efficient body builders than Iron, Nux Vomica, Gentian, Capsicum and Zinc Phosphide in some form," an advertisement in the paper read. "Health and strength quickly returns and pure, healthy blood is soon circulating through the body."

Another similarity that 1918 has with today is the overwhelming demand for masks.

"Detroiters by the thousands are wearing Red Cross gauze masks to protect them from influenza affliction," the Cadillac Evening News reported on Oct. 22. "The Michigan State Telephone employees, visiting nurses, and other persons who are required to give service under conditions that make it impossible to control their surroundings, are wearing the safety masks or endeavoring to secure them. Thus far the supply has been far short of the demand. The Red Cross women of the city are making the masks and they are many thousands behind the order at hand for the gauze coverings."

By late October, Dr. Ralston was prepared to predict that "if no changes for the worse take place it can be stated that the schools of the city will be quite certain to open again next Monday" — a prediction that proved quite premature. On Oct. 26, Ralston announced that the school "vacation" would be continued "in order to provide for every necessary degree of safety in that direction."

Heartbreaking reports of death and illness among young people were common during this period. "The brave fight for life made by Harry S. Worden was not equal to the demands of the disease, and the young man passed away at his home on Division Street," reads a report in the Oct. 28 issue of the paper. "Those who had the privilege here of best knowing Harry Worden speak of him in terms of highest praise, as a possessor of manly attributes and as one well worthy of friendship and esteem." Another report noted the death of a 2-year-old girl whose affliction began with influenza and developed into meningitis.

On Oct. 29, it was reported that 18 lumbermen from Cobbs and Mitchell camps were taken to the hospital to be treated for the flu. Around this time, a young Mercy Hospital nurse named Amelia Hibbeln was reported to have died after being infected with the flu.

By Oct. 31, Dr. Ralston expressed confidence "that the influenza and pneumonia situation now appears more hopeful of an earlier ending than at any time since the affliction started here." He said the number cases reported for the last 24 hours was less than at any time within the past two weeks.

During the first week of November, conditions had apparently improved enough that many district schools felt comfortable returning to session, although the Cadillac Evening News noted that "at no time have the Wexford County school districts been greatly afflicted with the influenza and had it not been for assisting in potato harvest a number of them would not have been closed."

A few days later, both the Lyric and Dreamland theaters in Cadillac announced they would open their doors after having been closed for several weeks. Both theaters indicated they made sanitary improvements to their facilities. "The Lyric has had a thorough cleaning and fumigating and looks better than on its opening day," the paper reported. "Dreamland has been given a good cleaning and fumigating and the lobby has been brightened with paint. The past several days have been bad ones for germs in both of Cadillac's theatres."

On Nov. 8, Gov. Sleeper and Cadillac Mayor Johnston announced that public gatherings could be held once again. "Health officer Ralston today ... informed the Evening News that conditions here appear to warrant the removal of the ban and that the opening of churches and theatres and the holding of public gatherings can be resumed as heretofore."