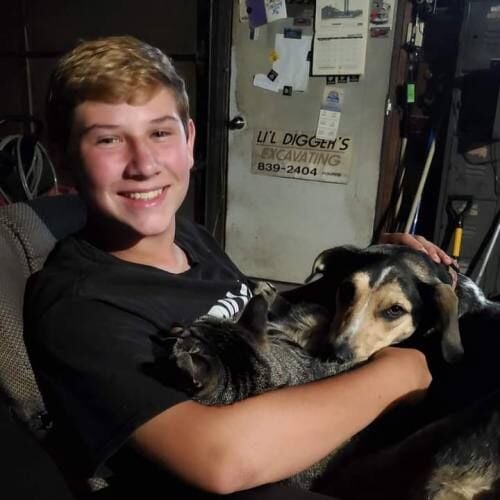 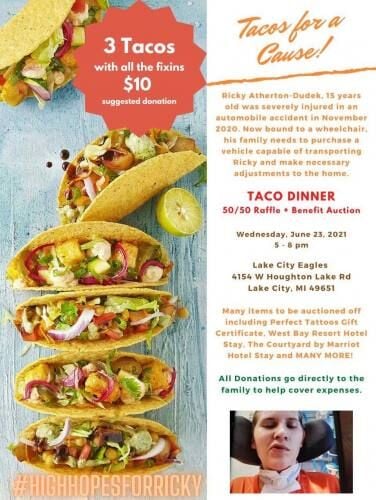 LAKE CITY — In support of the Sherry Dudek and her husband Mike, the Lake City Eagles, a nonprofit organization, and other local businesses, are putting on a benefit dinner to help with their son’s expenses.

Their son, Ricky Atherton-Dudek, 15, was severely injured after losing control and crashing his parent’s vehicle while driving to a friend’s home in November 2020. The vehicle he was driving rolled over and ejected him, resulting in him suffering a traumatic brain injury and being bound to a wheelchair.

Since the accident, Ricky has spent the last several months recovering at Mary Free Bed Rehabilitation Hospital in Grand Rapids. Recently, Ricky underwent surgery to implant a baclofen pump and is now resting. The pump delivers medication directly to Ricky’s spinal canal and helps reduce his back pain.

To assist the Dudek family, family friend Jessica Ackerson is helping put on a benefit dinner fundraiser called Tacos for a Cause on Wednesday, June 23, at Lake City Eagles. The fundraiser will run from 5 to 8 p.m. and includes a taco dinner, a 50/50 raffle and a silent auction.

“The purpose of the fundraiser is to raise funds for a wheelchair-accessible vehicle and improvements to the family’s house,‘ Ackerson said.

These improvements are an effort to make their home more wheelchair accessible. Currently, the family is working on building a ramp for their son’s wheelchair and expanding doorways to make it easier for Ricky to move around the house.

The dinner will include three hard or soft shell beef tacos with all the fixings, including lettuce, tomato and sour cream. There will also be beans, rice and dessert. Refreshments will include water, coffee and punch. There is a suggested donation of $10 per person for the dinner.

While enjoying dinner, attendees will also have the opportunity to participate in the raffle and silent auction. Items being auctioned off will include hotel stays, gift certificates from local businesses, car detailing packages, dog grooming, tattoos and much more. The winning bids will be announced at 7:30 p.m.

With a solid turnout at the family’s bake sale fundraiser last May, Ackerson is hoping to see the same support for this month’s dinner.

“We would like people to show their community support for a family in need,‘ Ackerson said.

Ackerson said they are looking at having more fundraisers to assist the family, including a comedy night, though nothing is official yet. As for Ricky, Ackerson said the family is expecting him to return home sometime in late June or early July.

For those interested in volunteering to help at the benefit dinner or to donate items to the auction, contact Jessica Ackerson at (231) 429-6392.

Those interested in helping the family can send checks to Sherry and Mike Dudek, 2637 West Davis Road, Lake City, MI, 49651.