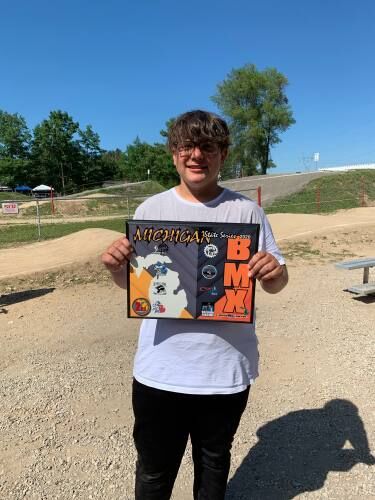 Kasen Dunn, 12, is pictured with one the medals he won at a BMX competition this year. 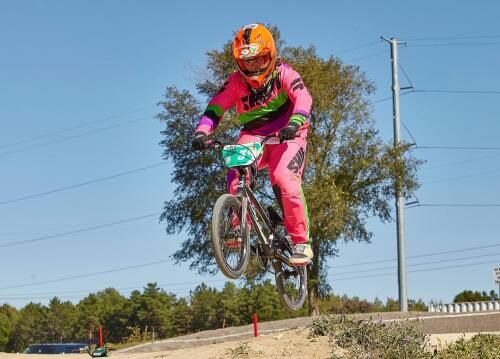 Kasen Dunn is pictured taking a jump during a BMX event this year. 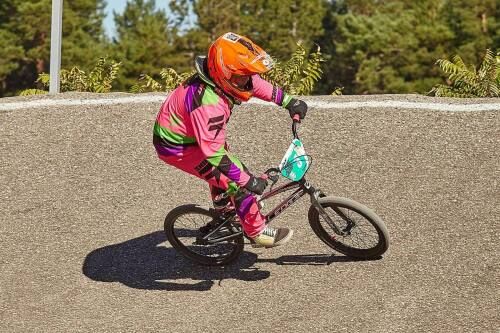 Kasen Dunn is pictured rounding a corner during a BMX event this year. 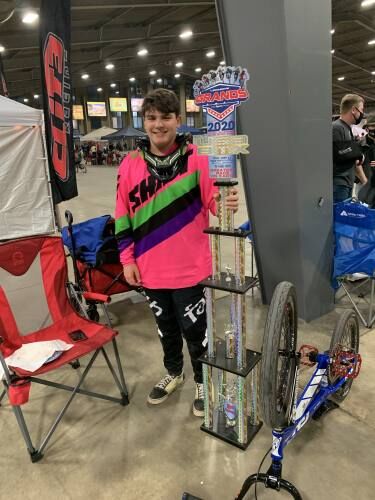 Kasen Dunn, 12, took third place this year in the USA BMX Grands race, where he competed in the intermediate class. 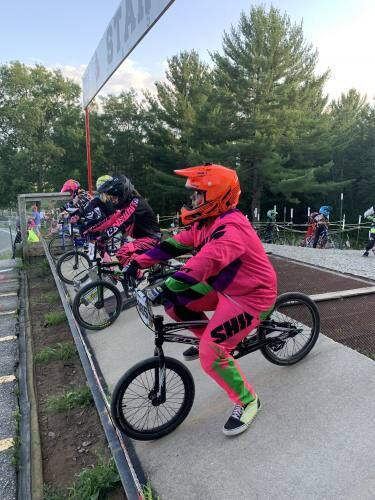 Kasen Dunn, 12, prepares to hit the "pedal to the metal" out of the gate during a BMX race. 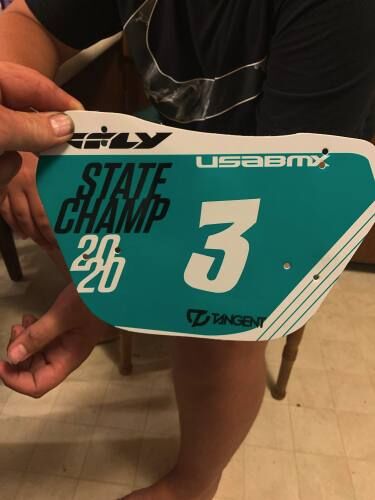 Kasen Dunn, 12, is pictured with one the medals he won at a BMX competition this year.

Kasen Dunn is pictured taking a jump during a BMX event this year.

Kasen Dunn is pictured rounding a corner during a BMX event this year.

Kasen Dunn, 12, took third place this year in the USA BMX Grands race, where he competed in the intermediate class.

Kasen Dunn, 12, prepares to hit the "pedal to the metal" out of the gate during a BMX race.

TULSA, Okla. — As 12-year-old Kasen Dunn rounded the track at Tulsa's River Spirit Expo over the Thanksgiving holiday weekend, the announcer quipped prophetically, "looks like Dunn's sitting out front in this one."

Indeed, Kasen was out front the entire race, and when he finished, he bunny hopped his BMX bicycle several times in triumphant excitement.

Over the course of several races held over two days in Tulsa, Oklahoma, Kasen took first place in the novice class of the USA BMX Race of Champions. He was competing against BMX racers from across the country.

Kasen, who is a seventh grader at Mackinaw Trail Middle School in Cadillac, fell in love with BMX racing almost immediately after he tried it out for the first time six or seven months ago.

"I loved the atmosphere," Kasen said. "All the people ... I also just love hitting jumps."

Wald said he urged Kasen to become involved in BMX racing initially to keep him fit over the summer so when winter returns, he'd be more prepared for Snocross racing, which he had been doing for some time previously.

Standing five-foot-seven and weighing 210 pounds, Wald said Kasen learned how to use his size to his advantage early on with his snowmobile.

"He's not afraid of the turns," Wald said. "But his weight works against him somewhat on a BMX."

While the particulars are different on a BMX bike, the basics are similar, allowing Kasen to apply his experience snowmobile racing to bike racing and quickly work his way up to a competitive level.

"It normally takes a season or two for a rider to get good enough to compete at this level," Wald said. "I thought this would be a longer learning process but he usually does catch on to things pretty quickly."

Kasen said he practiced for his races by peddling on a "manual machine" to strengthen his "pump" around corners.

Helping Kasen out with strategy on the race track have been two seasoned BMXers — Garth Springberg and Troy Raymond.

"They've been critical to his success on the track," Wald said. "And Garth has basically been our mechanic, as well."

Wald said some riders invest thousands of dollars into their bikes, buying precision-manufactured gears and other minor features. They were able to trim some costs by having a friend build Kasen's bike for him, but it still cost around $1,100. What makes a BMX bike different from a bike you'd buy at Meijer or Walmart are largely the materials used, such as the carbon fiber wheels, which "are more expensive than an entire bike" you'd buy at a big box store, Wald said. The end result is a high-performance bike that is fast and incredibly lightweight.

Before Kasen competed at the Race of Champions, he had to gain points based on his performance at runup races affiliated with USA BMX.

He competed four times before the championship event, and won two first place awards, one second place and one third place.

Most racers compete in six or seven races to qualify for the Race of Champions — which is an invitation-only event — so the fact that Kasen qualified in only four events is impressive in and of itself.

During the championship event, Kasen's foot slipped off his pedal during his first race but he made up for this mistake by placing first in every subsequent race, including the final event.

His score was so good leading up to the main event that Wald advised Kasen to take it easy so he didn't risk another pedal slippage. Of course, Kasen had his own plan in mind.

"He was pedal to the metal right out of the gate," Wald laughed.

Following his victory in the Race of Champions, Kasen took part in the Grands race in the intermediate class. The Grands was an open category race featuring riders of all abilities. He placed third in this race.

Based on his success this year, Kasen will be moving up permanently into the intermediate class. He plans to get a few more finals under his belt in the next couple of years, although he realizes the competition will be much stiffer.

"It will be a way tougher challenge," Kasen said. "So I'll just have to work harder at it."

Wald tries hard not to come off as boastful about his grandson's achievements but it's hard for him to conceal the joy he feels seeing Kasen work so hard toward something and find success along the way.