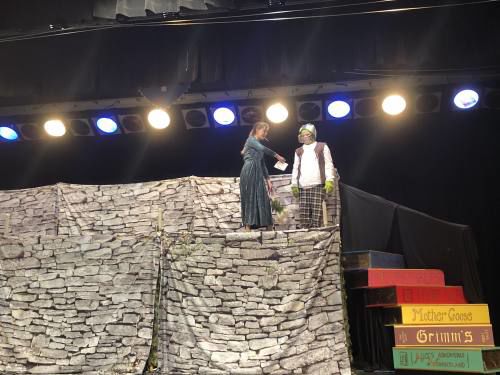 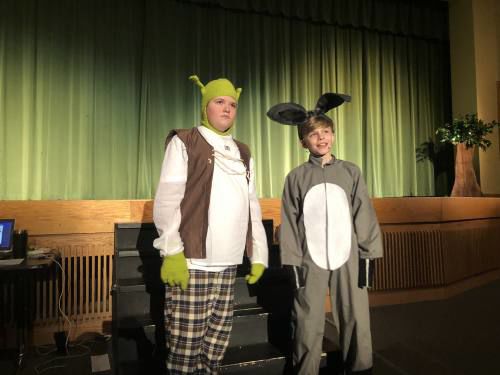 A bromance for the ages! Shrek (Brayden Hibbs) and Donkey (Hunter Mallohan) undertake a quest. 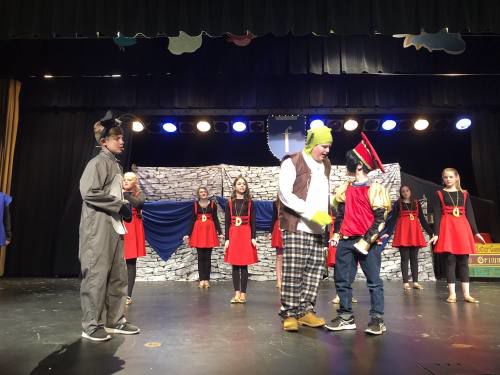 A bromance for the ages! Shrek (Brayden Hibbs) and Donkey (Hunter Mallohan) undertake a quest.

Cadillac Footliters Junior Players are putting on a musical version of the famous animated tale of an ogre on a mission, his wacky friends and his fierce lady love, Fiona.

There will be a lot you recognize, but “Shrek the Musical‘ has details the movie lacks.

“It gives a lot more of the back story and a lot more backstory in general,‘ said Shelley Taylor, one of the directors of the production.

Or rather, one of the adult directors.

For the first time, Footliters have split up their junior players, with older teens performing in the Freaky Friday musical this summer and kids ages 8 to 13 performing in Shrek.

Stage managing is thrilling and harder than it seems but “it pays off with a fantastic show that you helped run,‘ Simone said.

“This is the first time our leads have been this young,‘ she remarked. But it’s working out.

“I can’t say enough good things about them,‘ Taylor said. “They’ve rose to the occasion.‘

For most of the 55 kids performing in Shrek, this is their production, she said.

You can get your chance to see them make their debut Friday night.

“Shrek the Musical‘ will be performed Friday and Saturday nights at 7 p.m. on April 12, 13, 19 and 20 in the Cadillac High School Auditorium. There will also be a matinee at 2 p.m. on Saturday, April 20, with a “Swamp Party‘ preceding the show in the junior high school’s cafeteria. The swamp party will feature snacks, characters from the play and photo opportunities. The party is free, but tickets to the show are $10-12. See https://www.cadillacfootliters.com/tickets for more information.