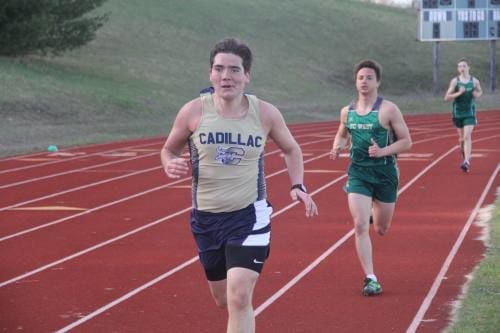 Jim Canfield, 18, is a member of the Cadillac High School track team and runs the 1-mile and 2-mile events. 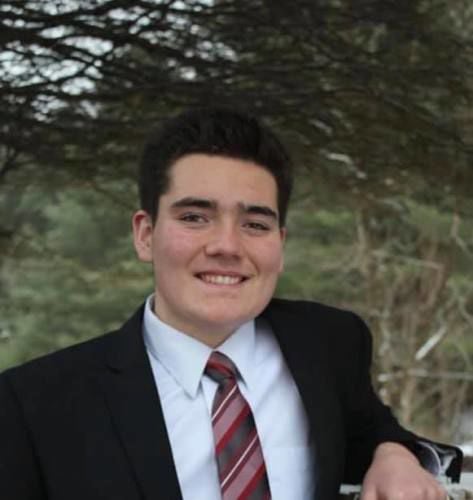 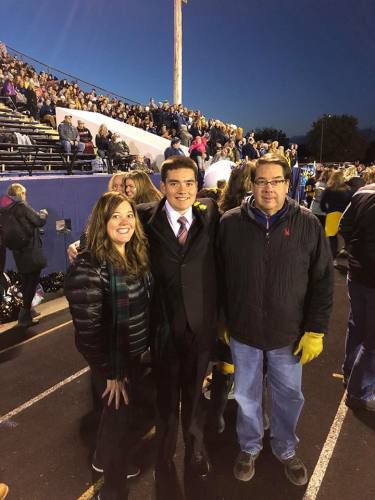 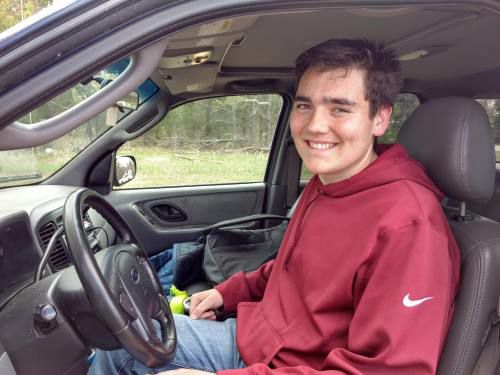 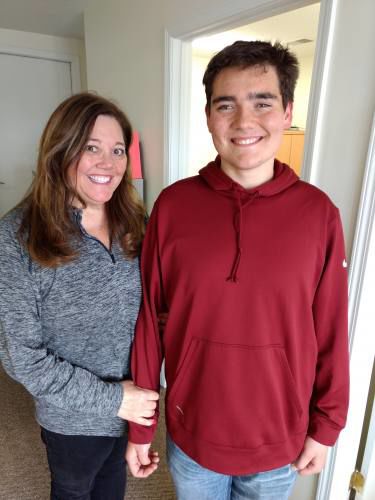 "This is my son Jim," said Mary Jane Dewey-Canfield. "Have you heard his story?" 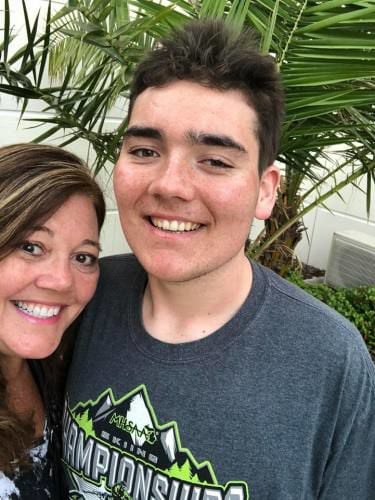 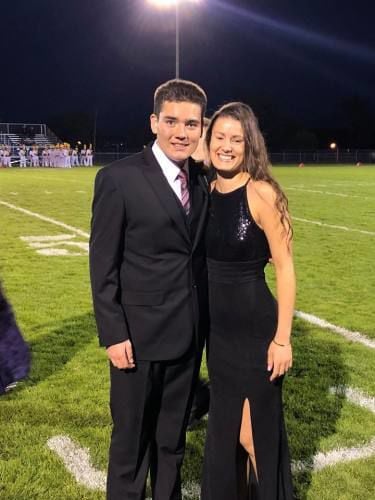 Jim Canfield, 18, is a member of the Cadillac High School track team and runs the 1-mile and 2-mile events.

"This is my son Jim," said Mary Jane Dewey-Canfield. "Have you heard his story?"

CADILLAC — Mary Jane Dewey-Canfield was at her son’s track meet when she had a “mom‘ moment. It was cold and damp that day, but it didn’t matter. Her son was excelling.

“I watched Jim go up and down, he must have gone across that field 100 times before he did his events ... back and forth,‘ she said. “I was weeping ... look at him go. Look at him walk and do lunges.‘

Jim Canfield, 18, took third in the 3200 run that day. At the next meet, Dewey-Canfield ran into her son’s pre-school teacher, Mari Jezak, whose daughter Julia is also on the team.

“It was an incredible moment to see Jimmy running, winning and beating all the odds,‘ Jezak said. “Mary Jane and I don’t cross paths that often. We were together in the beginning and now this ... It was a neat moment for us. It was so long ago. I remember when I heard the news. I was rocking Julia, she was a baby and she’s 15 now. Her son Jim — he is a miracle boy.‘

This is my son Jim

When Dewey-Canfield introduces her son she beams with pride. “This is my son Jim. Have you heard his story?‘

With her arm around his shoulders, Jim smiled one of those teenage smiles that says, “Yah, this is my mom. This is what she does.‘

The Canfields are sending out 400 graduation open house invitations with this message: “Jim is a miracle! All your prayers and God’s grace brought us to this incredible day.‘

They are inviting everyone that helped along the way, especially therapists, teachers and coaches. And they are remembering the story of their son’s recovery from the accident that almost took his life.

“I want the whole world to celebrate,‘ she said. “I want every one to know ... to see him graduate is just nothing but a miracle.‘

After a snowmobile accident in December of 2004, Jim Canfield was airlifted to DeVos Children’s Hospital in Grand Rapids. He was 4-years-old and had a traumatic brain injury.

Dewey-Canfield moved into her son’s hospital room and waited for him to wake up from a coma. Tom left to be with their daughter Katie but quit his job to drive back and forth every day.

“Seven doctors came into the room every morning,‘ she said. “They would only say that he would have therapy if he wakes up.‘

Three or four weeks later, Jim Canfield came out of his coma but seemed “lifeless.‘ Therapy began. After two months he still couldn’t walk. After three months, he could say one word sentences.

“We would post on Care Pages,‘ Dewey-Canfield said. “The outpouring was unbelievable ... the generosity and the amount of prayers. The St. Ann pre-school kids and teachers would pray for him every morning.‘

“We would watch these videos every morning at Mary Free Bed,‘ Dewey-Canfield said. “When Jim saw all of his friends, it helped bring back reality ... this motivated him. But no one would tell us if he was ’going to make it.’‘

Progress was slow. But just before Jim Canfield was released, an occupational therapist confided that after working with kids for 20 years, “Jimmy was going to be OK.‘

The couple cherished those encouraging words.

When Jim Canfield returned to St. Ann in May, he used a walker and was placed in special education. Speech and occupational therapy continued for years. The Canfields are still in awe of the community response and credit the kindness and patience of many for his continuous recovery.

This year Jim Canfield will graduate with a 3.37 grade point average and attend Central Michigan University to major in business. He was elected to the Homecoming Court his junior and senior years and this year was co-captain of the varsity ski team.

He has no memory of the first four years of his life. His first memories are “some of the rehab‘ in Grand Rapids.

“My favorite memories are of the teachers at St. Ann and how we were all a family,‘ he said. “I had to work so hard to become what I am today. I always wanted to work harder.‘

Every year Jim’s motivation to improve kicked in more, unleashing a work ethic that has impressed his Cadillac High School coaches.

Through sports, Jim gained confidence and made friends. And the quiet kid came out of his shell.

“Jim is at his locker every morning and he greets every student with a ‘good morning,’‘ said James Netzley, a Cadillac High School math teacher. “People look forward to it, he will yell down the hall to everybody he knows, which is everybody in the school.‘

“Back then, he wasn’t the fastest ...,‘ Netzley said. “As his soccer skills improved he got more confident. He worked crazy-hard to get better. I saw the work ethic most in skiing, I coached him from fifth grade. He would go out when Caberfae opened and ski until they closed, just trying to get better ... he’s progressed to be a very good varsity racer. He’s completely transformed his body through hard work and discipline. He’s changed from following to being more of a leader.‘

Thanks to his friend and mentor, Tim Coffey, Jim found his passion in running and has been successful in cross country and track.

“I met Jim through Tim Coffey, he brought him out to our summer runs,‘ said Tim O’Malley, the high school cross country coach and a special education teacher. “He was bigger then, he ran for us and he stayed out. He was passionate but he didn’t say a lot. He got used to the crew that year, we had 83 kids. Jim really got into it. From there he just blossomed and ran with me every day all summer two times a day. He dropped a lot of weight and had a great year in cross county.‘

“People are, like, astonished when they see me,‘ Jim Canfield said. “I didn’t really think I’d lose this much. I eat less now. I understand how it impacts.‘

“I’ve been coaching 16 years and baseball for 25 years,‘ O’Malley said. “I call him ‘Jimmy Neutron’ because of the way he way he approached running. With what he was dealt after that accident, kids should be in awe of what he has accomplished and how hard he works ... I get to see people working hard for a goal and James is one of those people that comes along once in a lifetime and you won’t forget him ever.‘

“I’m just humbled beyond measure,‘ said Dewey-Canfield. “If you saw him you wouldn’t think this kid ever had an issue. He’s a joy. He makes people laugh. And my husband Tom helped make Jimmy the person he is today, that’s where he gets his humor. They spent so much time together driving to therapy ... for years.‘