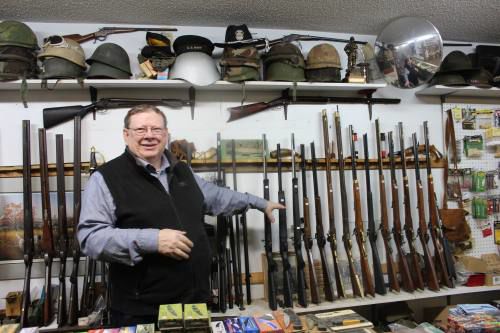 Carl Carlson of Carl\'s Sports Center had sold three muzzleloaders by shortly after noon on Dec. 4, 2019. 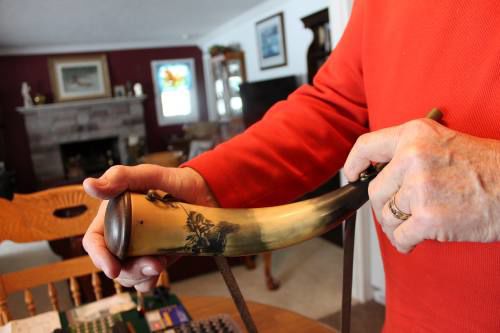 Joe Hale shows off a horn used to store and measure powder for old-fashioned muzzleloaders. 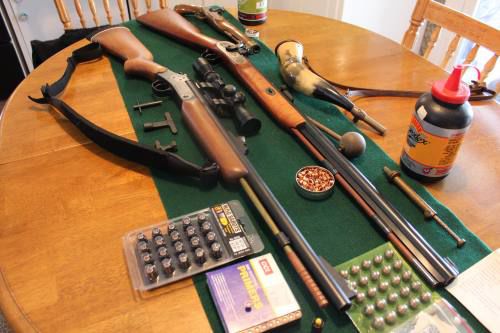 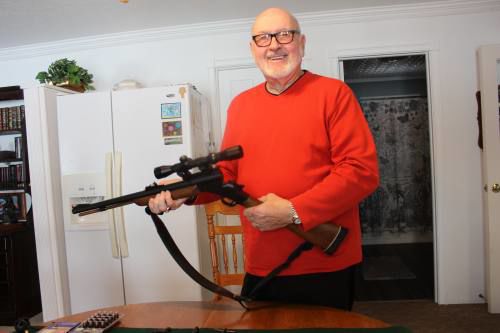 Carl Carlson of Carl\'s Sports Center had sold three muzzleloaders by shortly after noon on Dec. 4, 2019.

Joe Hale shows off a horn used to store and measure powder for old-fashioned muzzleloaders.

LAKE CITY — Joe Hale had no luck during firearm season.

But Hale is one of about 138,000 hunters in Michigan who will try again to hunt and harvest a buck before the year is out, using another specific kind of firearm, the muzzleloader.

Statewide, muzzleloaders harvested about 25,000 deer in 2018, representing a success rate of 17.4% compared to the estimated 138,000 muzzleloaders who tried, according to data provided by Chad Stewart, the Department of Natural Resources’ deer and elk biologist. Firearms/rifle hunters, by comparison, had a 35.7% success rate and archery hunters had a 32.4% success rate.

But it’s not necessarily the choice of weapon that pushes down the muzzleloading popularity and success rate.

The modern-day muzzleloader is a lot easier to load than older styles. The newer model muzzleloaders crack open at the center the way a rifle or shotgun does; scopes and better-designed projectiles than the musket balls you may be picturing help with accuracy. Even the powder comes in more precise measurements.

You do need to hold the gun a little more steady than a rifle.

Instead, it’s both deer and hunter behavior that suppresses the muzzleloading success rate.

Muzzleloading season comes after archery and firearm season. Fewer hunters enter the woods during the muzzleloading season because many of them have already got their buck during the earlier seasons. Those hunters’ success removes approximately 300,000 deer from the landscape, Stewart explained. And finally, there’s the weather.

“It’s colder out, with the potential for difficult hunting conditions or travel to your hunting location, which likely keeps hunters away as well,‘ Stewart said in an email.

The deer, too, hunker down against the cold.

“Deer have shifted their focus from breeding to accumulating calories and building up fat in preparation for the winter,‘ Stewart explained. “With a slowing metabolic rate and subsequent reduced movement, deer will spend most of their time bedded or around the few food resources remaining.‘

Deer start acting differently because of the firearms hunters that were in the woods just a few days ago.

“There are fewer deer on the landscape, and the remaining deer have been pressured by hunting, so they have adjusted their behavior and movements, making it more difficult to encounter individuals,‘ Stewart said.

The woods are quieter during muzzleloading season, Hale agreed. The quiet can be nice. But it’s a little harder to hunt.

“In a way I kind of like it better when there’s more hunters moving around because they move the deer around,‘ Hale said.

While hunting as a whole faces a challenge as baby boomer participation drops off, muzzleloading participation isn’t dropping as quickly as the firearm rate of participation, according to Erik Schnelle, president of the Michigan state chapter of Quality Deer Management Association.

And in the Cadillac area, muzzleloading is fairly popular.

During 2017-2018, “We actually saw a very small increase in the number of muzzleloader hunters,‘ Schnelle said.

That may have been due to weather; milder or later winters can mean more muzzleloaders hunt.

“When you talk to deer hunters; the thing that really gets them excited; they’ll start talking about the big bucks,‘ Schnelle said.

For many, the appeal of muzzleloading season is that it’s more time in the woods, another shot at one of those bucks.

That’s true for Dan Valley, 66, of Cadillac, who started hunting again during the muzzleloading season last year after many years away and plans to muzzleload again this year.

“Just to extend my season,‘ he said.

Valley said he used to hunt with an older-style muzzleloader but was attracted to the sport again because of new technology that makes using a muzzleloader easier.

Carl Carlson, owner of Carl’s Sports Center between Lake City and Cadillac and a former competitive muzzleloader, said he sells 50-60 muzzleloaders in the pre-season, often to hunters who didn’t get a deer during firearm season and who want to keep trying. Carlson said he sold 10 muzzleloaders on Tuesday and had sold three before noon on Wednesday when the Cadillac News dropped by.