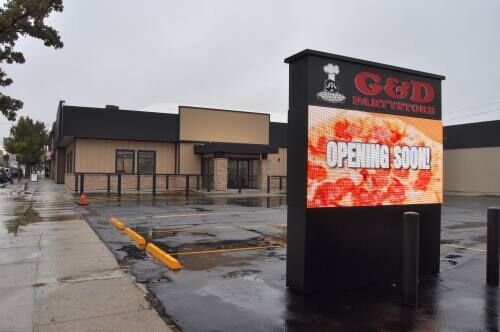 Anyone whose been to the old G and D will be able to attest to the contrast that exists when they enter the new facility. Even the outside of the business has a more modern image, with an LCD sign that currently displays a message saying "Opening soon." 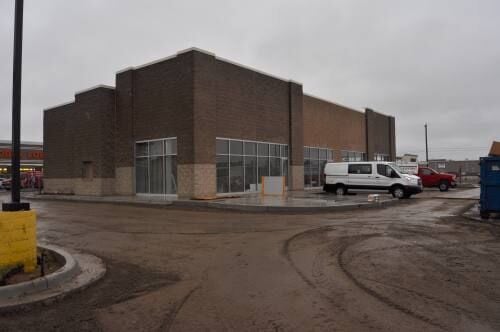 Pictured is the structure next to Hobby Lobby in Haring Township that will house a Tropical Smoothie Cafe and Great Cuts. 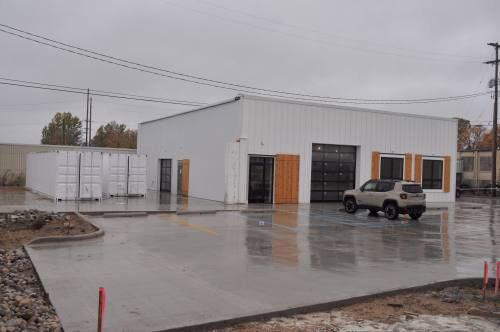 At the site of the old Better Bodies Health and Fitness Center, Robb Munger is in the process of finishing up construction of the Cadillac Brews-Coffee House.

Anyone whose been to the old G and D will be able to attest to the contrast that exists when they enter the new facility. Even the outside of the business has a more modern image, with an LCD sign that currently displays a message saying "Opening soon."

Pictured is the structure next to Hobby Lobby in Haring Township that will house a Tropical Smoothie Cafe and Great Cuts.

At the site of the old Better Bodies Health and Fitness Center, Robb Munger is in the process of finishing up construction of the Cadillac Brews-Coffee House.

CADILLAC — Working through delays, hardships and setbacks particularly unique to 2020, a number of area businesses with plans for new construction and development have been able to stick with their construction schedules (more or less) and now are nearing completion on their projects.

Among the renovation or new construction projects that have been in the works during the last 12 months are G and D Pizza and Party Store, Lake Cadillac Resort, Save A Lot, Jimmy John’s, Great Clips salon, Tropical Smoothie Cafe and Cadillac Brews-Coffee House.

The new G and D building, located at the site of the former Weidner Ford Mercury Lincoln dealership at 319 North Mitchell St., has been generating a lot of buzz lately.

Doing business for many years in the same block as the Cadillac Lofts — another major development that is nearing completion this year — G and D owner Paul Kurtzman Jr. said they decided to move rather relocate to the Lofts lower level because they would have lost a lot of their parking space, which is an important part of their business model.

The new facility is about twice the size of the current G and D, is accessible from Mitchell Street and most importantly, has a large parking lot.

Anyone who’s been to the old G and D will be able to attest to the contrast that exists when they see the new facility.

“Everything is 40 years newer,‘ Kurtzman said.

Even the outside of the business has a more modern look, with an LCD sign that currently displays a message saying “Opening soon.‘

Delays in obtaining materials and other complications caused by the COVID-19 pandemic pushed back the project by around a year but Kurtzman said they’re on track to opening the new facility by next week or the first week of November.

Unlike the old building, which is very confined, the new G and D has enough space for a sit-in dining area. Kurtzman said he’s not sure how it will be used for the time being, however, with the uncertainties surrounding COVID restrictions on capacity levels.

“We’re waiting to see on that,‘ Kurtzman said.

With so much more space to operate the business, Kurtzman said they’ve been looking to hire more employees. He said they’ll also be offering some new food selections, although he was hesitant to reveal exactly what until they were finished with the move.

Now that work on the new facility is essentially complete, Kurtzman said they’re gearing up for the move, which presents a lot of logistical challenges. He said they’re hoping the transition will be seamless, with no interruption of customer service.

In the same block as the old G and D, crews are working to get the bottom floor of the Cadillac Lofts ready for the new Jimmy Johns sandwich shop.

Dean DeKryger, architect of the Cadillac Lofts, said Jimmy John’s has brought in their own contractor to finish the site, so he’s not sure how far along they are, or when they will be opening.

The Cadillac News requested an update on the Jimmy John’s opening, but did not hear back by press time.

A few blocks north of the new G and D, the owners of Save A Lot are closing the store from tonight through Tuesday, Nov. 3 for extensive renovations.

One of the store owners, Tom Freeman, said they’ve been planning the renovations for some time; since purchasing the store in 1999, when it was a Glen’s Market, he said it’s had little in the way of major upgrades or improvements.

“It needed work,‘ Freeman said. “We’re doing a number on it.‘

The interior also has been repainted with a blue and grey motif, which will complement the new fixtures they’ll be installing during the renovation.

“It took a lot of planning to get everything done in such a short period of time,‘ Freeman said. “The store was tired, now it will have new life. Cadillac deserves this.‘

In Cadillac West, Mike Blackmer and business partner John Kulhavi are wrapping up around $4 million in upgrades and renovations to the Lake Cadillac Resort, formerly known as the Sands Resort.

All the rooms and the pool area have been completely renovated, with brand new furniture, appliances, and even original artwork depicting various scenes around the Cadillac area.

One of the features of the resort that Blackmer’s most excited about unveiling is the former nightclub, which he’s in the process of transforming into a family-friendly bar, restaurant and dance hall with a mob-inspired motif, complete with an original sign from the old Las Vegas Dunes Hotel and Casino, along with a mural depicting and signed by a number of famous Mafia figures.

The establishment, which will be called the “Sultan’s Table,‘ after the sign from the Dunes Hotel and Casino, will offer a variety of light food options, including wraps, submarine sandwiches and salads.

Blackmer said they hope to be finished with renovations and have the Sultan’s Table open by November.

North of Cadillac, in Haring Township, two new franchise locations next to Hobby Lobby are in the process of being built: a Tropical Smoothie Cafe and a Great Clips hair salon.

According to a statement issued earlier this year, the salon will be located at 8855 E. Boon Road and is expected to open in early 2021. Once it is open, the plan is to have a grand opening and a limited offer of $4.99 haircuts, according to Great Clips franchise owner Jerry Holmes of Sonrise Clippers LLC.

Sonrise Clippers, LLC is a family-owned business operating 13 Great Clips locations throughout western and northern Michigan. By early next year, Sonrise Clippers will be opening the new Cadillac location but also one in Ludington, according to Holmes.

On Thursday, Holmes provided a statement to the Cadillac News regarding how construction is going: “We continue to build out the new Great Clips salon. We are currently targeting an opening date in late January and hope to have more concrete details to share with the local community soon.‘

As for the Tropical Smoothie Cafe, a notice on the corporate website states “Opening Soon!‘ in regard to the Cadillac location but little additional information is provided.

The Cadillac News reached out to Tropical Smoothie Cafe for an update on how things are going with the new location but didn’t hear back by press time.

At the site of the old Better Bodies Health and Fitness Center at 412 S. Mitchell St., Robb Munger is finishing up construction of the Cadillac Brews-Coffee House.

All told, Munger said he’s invested around $500,000 on the project, which began in earnest last year with demolition work on a large section of the old building.

Throughout the construction process, Munger said they’ve had to deal with 2-7-week material delays due to shortages caused by factories closing down earlier this year.

The plan is to eventually sell food and beverages out of large cargo containers, which have been shipped to the site and will be positioned with a crane next week.

In addition to a selection of alcoholic beverages (possibly brewed onsite), coffee and tropical smoothies, the store will offer some light food options such as pita wedges, dips, sandwiches, pulled pork and wraps.

Munger said he’s also going to rent out the main structure as a gathering place for various types of events, including weddings.

Crews will be paving the driveway to Cadillac Brews next week, said Munger, who’s aiming to open the establishment on Nov. 28.