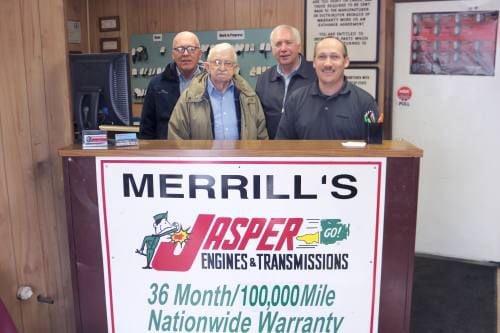 From left, John Taylor, Merrill Taylor, Kent Taylor and Chad Boolman pose for a picture recently after Boolman and Kent Taylor worked out the details on the sale of Merrill\'s Service Center in Cadillac. 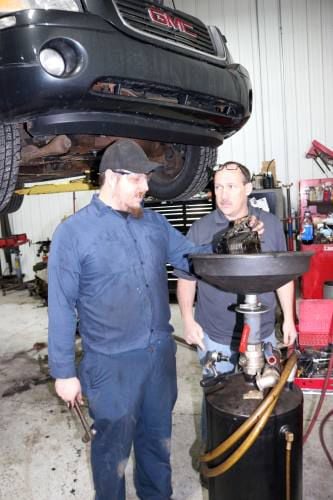 From left, John Taylor, Merrill Taylor, Kent Taylor and Chad Boolman pose for a picture recently after Boolman and Kent Taylor worked out the details on the sale of Merrill\'s Service Center in Cadillac.

CADILLAC — The ink may still be drying on the paperwork that had Chad Boolman purchase Merrill's Service Center in Cadillac from Kent Taylor, but familiar faces and service remain.

Merrill Taylor started the business that bears his name in 1960. As he put it, he was working for the state and decided he wanted to start his own business — so he did. He always enjoyed working on cars but never had any formal training.

When he opened his gas station that had two service bays and a wrecker service on South Mitchell Street, Merrill said he did things like brakes but no major work. In 1979, he expanded, and he did again in 1985 when he moved to his current location. In 1992, he retired and sold the business to his son Kent.

"We still have customers dating back to the 1960s," Merrill said. "Most have passed away but a few are still here, so we did something right."

The younger Taylor said he worked at the gas station for as long as he can remember. He basically grew up in the gas station. When he was thinking about selling it was Boolman's work ethic and personality that made him the perfect fit.

"He has the same drive to take care of customers," he said.

Boolman said discussions between him and Kent started about eight months ago and the service people have become accustomed to at Merrill's will remain.

Where people will notice changes is the integration of technology. While Kent said he didn't use the internet as part of his business, Boolman said he wants to integrate it so customers will eventually be able to use online scheduling for service as well as have a website for people to use to find out more about the business.

Although Boolman has not been in the business as long as Merrill or Kent, he has been working in the industry for 25 years at various places throughout the Cadillac area. He hopes that experience will help keep the customers he has and bring in new ones.