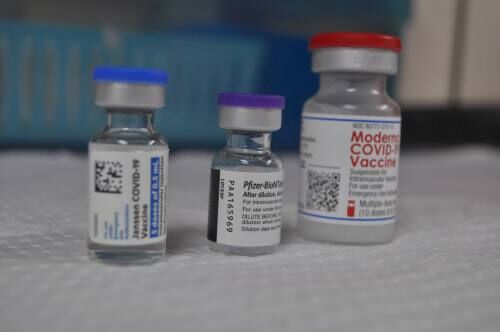 People who are trained in vaccine administration know to look for sediment in the bottle, Dr. Jennifer Morse said. 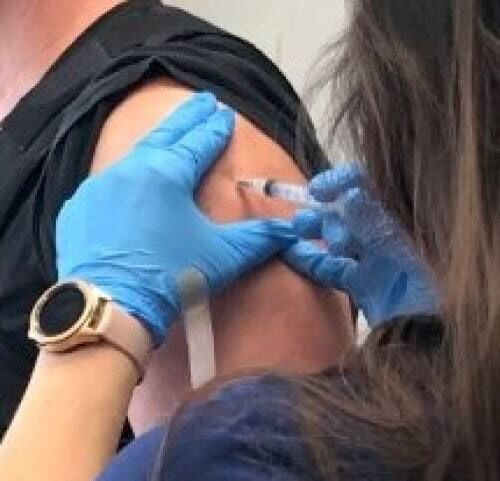 COVID-19 vaccine side effects are similar to other vaccines.

People who are trained in vaccine administration know to look for sediment in the bottle, Dr. Jennifer Morse said.

COVID-19 vaccine side effects are similar to other vaccines.

CADILLAC — She's the doctor dozens of counties rely on for good information on public health, and during the COVID-19 pandemic, Dr. Jennifer Morse has been asked some alarming things.

One of the questions she was asked recently ended up on Twitter. During a District Health Department No. 10 board meeting, Dr. Morse was asked about microchipping and the COVID-19 vaccine, a false conspiracy theory that the government is putting microchips in vaccines.

"That is still a rumor," Dr. Morse said. "It's just unfathomable to me."

Dr. Morse said the person who asked the question is pro-vaccine but was expressing dismay that people believe the false microchipping conspiracy theory.

Nobody is injecting microchips instead of or alongside the COVID-19 vaccine.

Dr. Morse said she responded to the question during the board meeting by pointing out that microchips would still be visible to the naked eye. And they need a big needle. Microchips inserted into pets, for example, use a needle that's much wider than the one used to inject a fluid vaccine.

Second, anybody who is trained in how to administer vaccines knows to look for sediment or solids in the bottle.

"If it's anything visible to the naked eye, we won't inject it," Dr. Morse said.

Finally, "If you're worried about microchipping, don't have a cell phone," Dr. Morse said. "You're carrying one every day."

Dr. Morse is also one of the people the newspaper calls when reporters are chasing down community rumors about COVID-19 and vaccination; specifically, the paper asked Dr. Morse about rumored vaccine reactions.

There are a couple of things to keep in mind when it comes to vaccine rumors.

First, association is not causation. That's especially relevant with COVID-19 because it can have such a long incubation period.

"You can be incubating COVID, get your vaccine and then 10 days later, get really sick with COVID. And it doesn't necessarily mean that the vaccine made you sick with COVID," Dr. Morse explained. Or you could get sick with some other illness.

"Just because it happened after the vaccine doesn't mean the vaccine caused it," Dr. Morse said.

It's similar to the false and debunked theory that other vaccines cause autism.

"Autism tends to become apparent around the time kids get vaccinated (but that) doesn't mean that that's what caused their autism," Dr. Morse said.

Another thing to consider is that some people will get sick with COVID-19 even after they're fully vaccinated. The vaccine is about 95% effective, meaning about 1 in 20 people who receive the vaccine could still get COVID-19.

You have to take into account how widespread the virus is in the community.

If there's widespread disease and people aren't taking any precautions—gathering in large groups without wearing masks and not social distancing—then 1 in 20 people can really add up quickly.

The amount of COVID in the area needs to drop as immunity builds for us to really stop the spread, Dr. Morse said.

With the COVID-19 vaccine still being new, right now when there is a breakthrough illness (somebody who gets sick despite vaccination), health officials try to do additional testing to see if the person contracted a variant or if there was any issue with their antibody production, Dr. Morse said.

"The CDC is having us really aggressively investigate all of those cases, just to see, is there anything wrong to cause those—other than just the statistics of, you know, it can't work 100% of the time," Dr. Morse said.

Side effects remain pretty typical of most vaccines, with young people typically experiencing more side effects because their immune systems are more robust in the first place.

Some pain at the injection site is typical for just about everybody. With the mRNA vaccines, the second dose can result in people feeling tired, achy, or feverish for a day or two, but typically only the younger population; people over 50 usually feel fine.

A "very small handful" of people had possible allergic reactions like a rash or itching or a tight throat," Dr. Morse said. The health department calls 911 for those calls, but all of the people to whom that has happened were seen and released "and had no further issues."

It's easy to see how some anti-vaccine rumors get started.

"They died of expected or natural causes," Dr Morse said. In fact, fewer people died than was otherwise expected.

"It does not seem that there's any reason to suspect that it's leading to death," Dr. Morse said of the vaccine.

And fully vaccinated people are not dying of COVID-19, either.

Anecdotally in the local area, "we are not seeing fully vaccinated people in the hospital, or dying," Dr. Morse said.

Get vaccinated as soon as possible, Dr. Morse said.

"We are seeing cases and deaths increasing at an alarming rate," Dr. Morse said.

Northern Michigan hospitals are running out of room.

"Our hospitals are at capacity. So if you were to get sick, there might not be a bed for you," Dr. Morse said. You might be sent to a hospital in another town.

"We might get to that point again where we have to ration things like ventilators. People will die at an increased rate. When we talk about controlling COVID, that is the main thing, we aim to control," Dr. Morse said. "We're not trying to control every single case, we're trying to keep it manageable. If we don't have beds and hospitals, if we don't have ventilators, we can't do this, we can't take care of people."