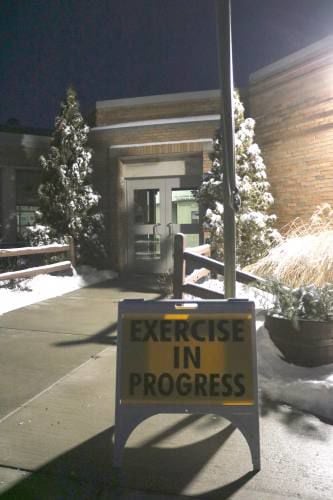 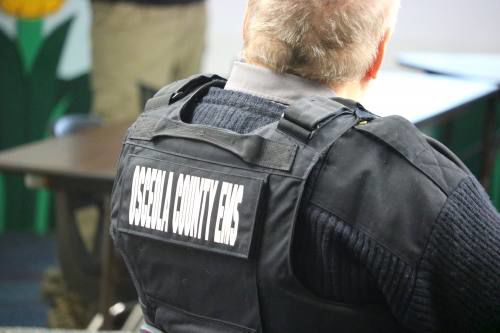 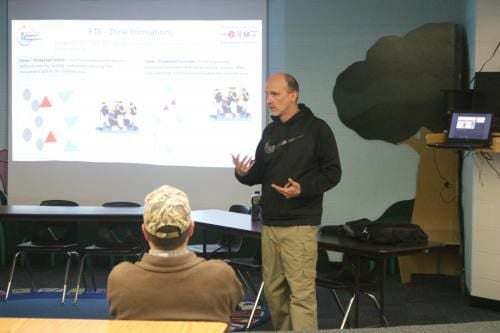 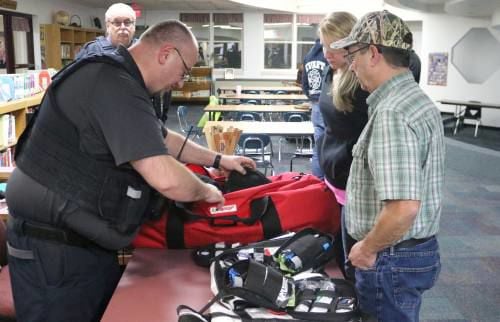 Osceola County first responders look at rescue kits that they would use in the event of an active shooter incident during recent training. The kits have tourniquets, gauze, trauma shears and other first-aid tools meant to stabilize patients in the immediate aftermath or even while the incident is still ongoing. The county now has enough kits to treat 400 people. 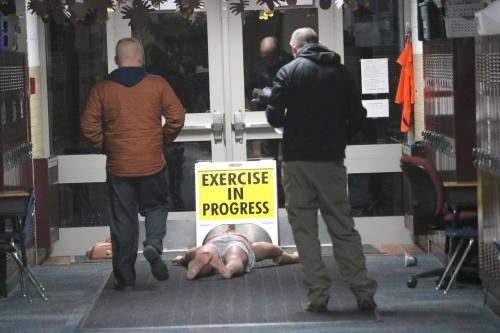 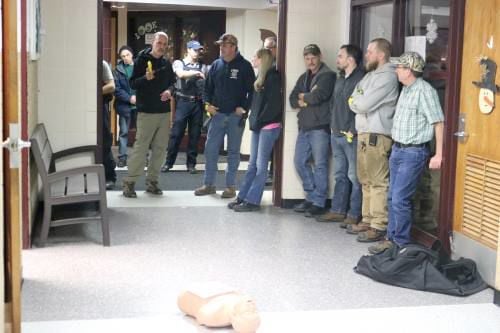 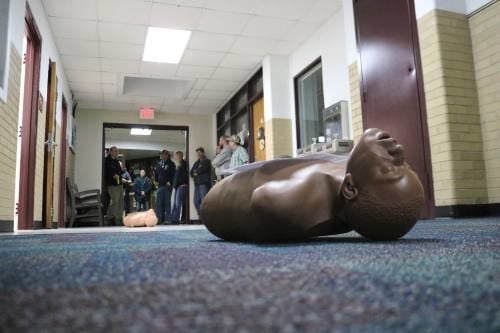 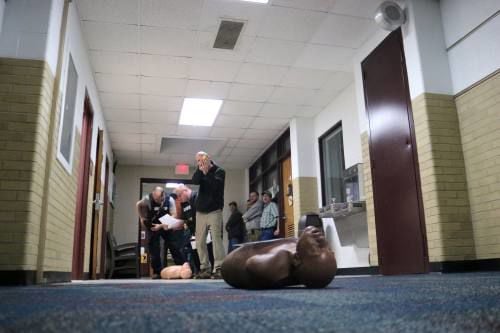 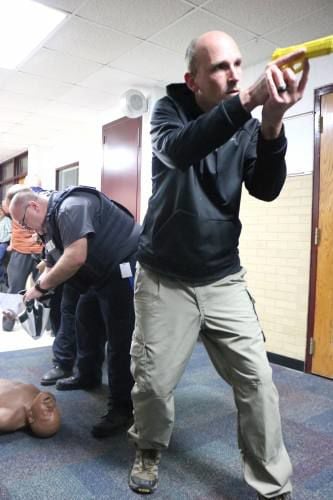 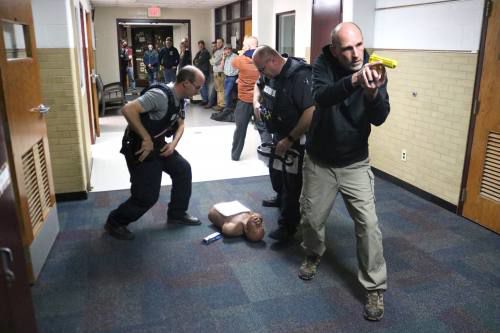 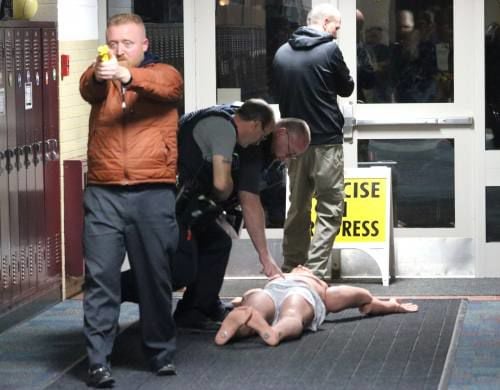 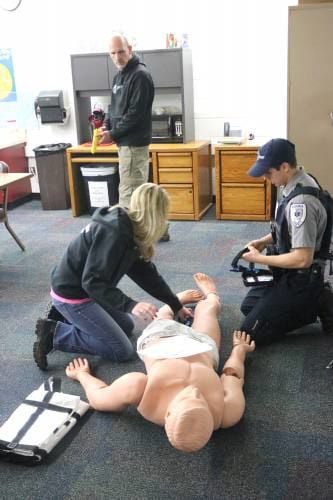 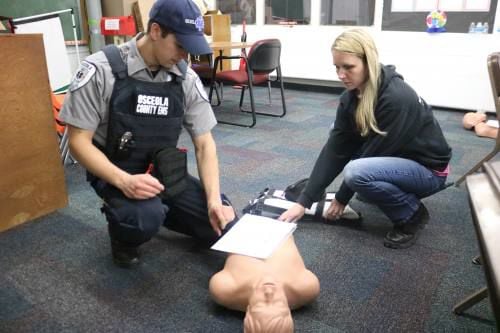 Osceola County first responders look at rescue kits that they would use in the event of an active shooter incident during recent training. The kits have tourniquets, gauze, trauma shears and other first-aid tools meant to stabilize patients in the immediate aftermath or even while the incident is still ongoing. The county now has enough kits to treat 400 people.

MARION — Every second counts when lives are at stake and recently first responders got training to help them save lives if an active shooter incident ever occurs in Osceola County.

Osceola County Emergency Services organized training for Rescue Taskforce recently at Marion Elementary School. Previously training was held at Evart High School on Jan. 8. Two other training exercises also were scheduled, one at Pine River High School and one at Reed City High School. The training in LeRoy, however, was canceled to be rescheduled at a later date, while the training in Reed City is Thursday.

A rescue task force groups 2-4 law enforcement officers with two medical first-responders so they can go into a building, such as a school, to rescue and treat people who have been injured during an incident like an active shooting. Osceola Emergency Management received a rural development grant from the U.S. Department of Agriculture as well as donations from Ice Mountain and the Osceola County Community Foundation for protective vests and rescue kits for all ambulances and fire trucks in the county.

The kits have tourniquets, gauze, trauma shears and other first-aid tools meant to stabilize patients in the immediate aftermath or even while the incident is still ongoing. The county now has enough kits to treat 400 people.

While the thought process in the past has been to “stop the killing‘ meaning stopping the active shooter, Osceola County Emergency Management Director Mark Watkins said they also want to “stop the dying‘ of those who were injured during the event.

Watkins said that was one of the many lessons learned as a result of the Columbine shooting in April 1999. He pointed to the tragic story of teacher and hero Dave Sanders, who died because it took so long for them to get treated and rescued.

“Looking back, we didn’t have a lot of plans because the science was evolving,‘ he said. “Everyone had an idea but it also was a hazard people don’t want to talk about. It has to be talked about and hopefully, the tools we are making will help to make this easier.‘

Although Rescue Taskforce training is for Osceola County first responders, the framework and plan that originated in the county also are being used throughout the region. Watkins said the framework for training used in Osceola County is being used as the model for the Michigan State Police District 6 which includes Mason, Lake, Osceola, Clare, Oceana, Newaygo, Mecosta, Isabella, Muskegon, Montcalm, Ottawa, Kent and Ionia counties.

Watkins said in 2016 he started looking at updating their plans to the county’s Incident Action Plan. He said during that time he found that active shooter preparedness had plans ranging from 20-200 pages. When compared to other hazards in the purview of emergency management, wildfires or snowstorms, active shooter plans were all over the board.

“We first developed an Incident Action Plan format that was concise and easy to teach. We started with that and it was an overwhelming success both in Osceola County and other jurisdictions have been picking it up,‘ he said.

During the past six months, Watkins said he has been going out and teaching the Incident Action Plan, but during that process, the Rescue Taskforce was developed. He said there wasn’t a good system in place so it only made sense to also incorporate that.

Now the MSP is helping by endorsing the Rescue Taskforce within District 6 and Watkins said it has been presented to District 8 and other sections throughout the state, according to Watkins. Although it would seem this would be a feather in the cap of Osceola County Emergency Management, Watkins said it is not looked at like that. He also said the plan that Osceola County has implemented is no better than any other plan, but it is superior in one aspect.

“We look at it as something we use that can help other people. All places have active shooter plans. We are not doing anything extraordinary that other places aren’t necessarily doing in pieces,‘ he said. “The benefit we have in our IAP and (Rescue Taskforce) is we are doing all of them together and intertwined.‘

He said his organization is in the early stages of implementing the Incident Action Plan framework but the Rescue Taskforce is the second phase of that process. For that reason, Maddox said he felt it was important to see the training and what is practiced.

“We are almost there in terms of finalizing (the IAP) and (Rescue Taskforce) is the other half of it,‘ Maddox said. “It is important that I get my eyes on it.‘