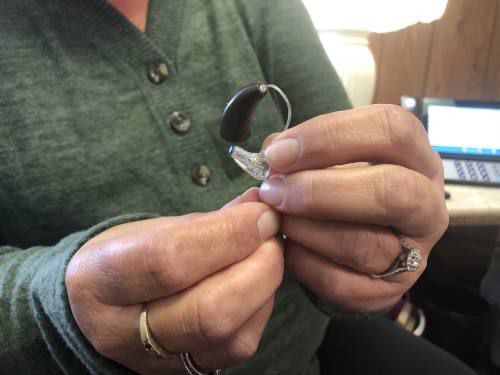 Missy DeLeon shows how small a hearing aid can be; the devices are expensive but can last a lifetime if properly cared for. 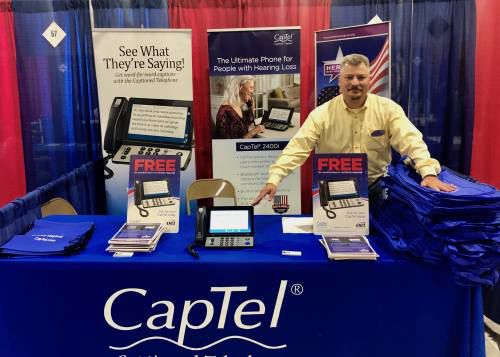 Cory Enyeart, who installs CapTel phones for OEI, at a booth at the Wex.

Missy DeLeon shows how small a hearing aid can be; the devices are expensive but can last a lifetime if properly cared for.

Cory Enyeart, who installs CapTel phones for OEI, at a booth at the Wex.

When he’s listening to you speak, it can be intimidating.

Cory Enyeart’s gaze can be intense, he knows.

“Some people will sometimes read that wrong, but I have to,‘ Enyeart said.

He’s not trying to bully you — he’s trying to hear you, and paying close attention to your face helps.

Enyeart is one of approximately 24% of Americans under the age of 70 with hearing loss, according to the National Institute on Deafness and other Communication Disorders (NIDCD).

Though he doesn’t use a hearing aid yet, Enyeart knows that day is coming.

He works for a company called OEI (which stands for Outreach, Education and Installation) and through his work installs CapTel phones, which have a captioning service for people who have hearing loss.

The phones, captioning service and installation are free.

“Everybody asks me, ‘What’s the catch?’ and fortunately, there is no catch,‘ Enyeart said. “How’s that possible? These are funded under (Title IV) of the ADA, the Americans with Disabilities Act.‘

If there is a catch, it’s that, for the captioning service to work properly, somebody is listening in on the other half of the phone call.

But people usually don’t worry about that, Enyeart said.

“There’s a person on the line that is listening to the other party to help provide the captioning. And I’ve really not had anybody that concerned about it,‘ he said. “It is a giant call center with a bunch of disinterested people.‘

While the phones with the captioning service are free, hearing aids, another commonly-seen device used to help people with hearing loss, are another story.

DeLeon can adjust hearing aids based on how well you hear high and low tones.

“Where an amplifier adjusts all sound and you just killed your good hearing,‘ she said.

Enyeart, who suspects shooting guns and scuba diving contributed to his hearing loss, says it’s his difficulty hearing high tones that makes him want to get a hearing aid soon.

Hearing loss can be isolating. It can lead to marital strife and is linked to dementia.

Often, it’s the spouses that put their foot down and insist that the person with hearing loss come in for a screening.

“Most people, especially if they come in with the spouse ... the spouse is like ‘I’ve had enough. You can’t hear and our marriage is on the line,’‘ DeLeon said.

DeLeon said she’s given people hearing screenings and then not seen them for a few years.

When people finally do get their hearing aids, it’s life-changing.

October is National Protect Your Hearing month. The NIDCD has the following tips:

Know which noises can cause damage (those at or above 85 dBA).

Wear earplugs or other protective devices when involved in a loud activity (activity-specific earplugs and earmuffs are available at hardware and sporting goods stores).

If you can’t reduce the noise or protect yourself from it, move away from it.

Be alert to hazardous noises in the environment.

Protect the ears of children who are too young to protect their own.

Make family, friends, and colleagues aware of the hazards of noise.

Have your hearing tested if you think you might have hearing loss.

The following are the typical noise levels of certain activities, according to the NIDCD.

Music through headphones at maximum volume, sporting events, and concerts

iPhone users who want to track their hearing health are in luck; with the latest software update, the Health app will tell you if you’ve been listening to your headphones too loud. And the Apple Watch series 4 or later can also tell you if noise in your environment has been dangerously loud.