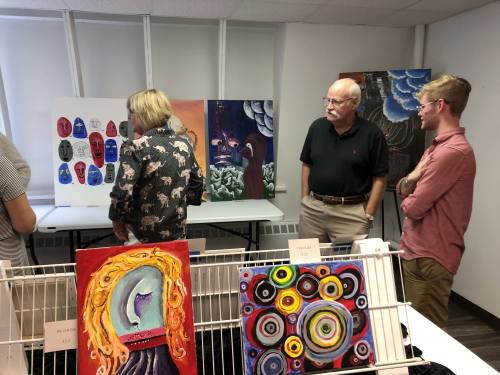 Matthew Hicks, far right, talks about his artwork with attendees of his recent "one-man show" put on by Up North Arts. 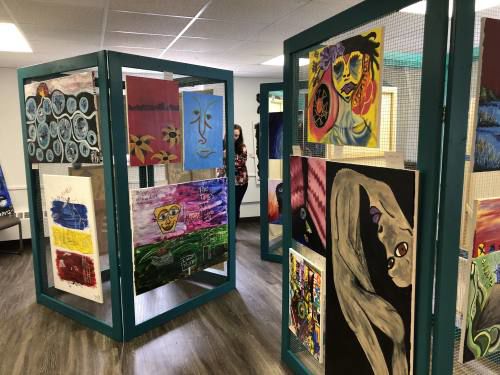 Matthew Hicks, far right, talks about his artwork with attendees of his recent "one-man show" put on by Up North Arts.

CADILLAC — A young Cadillac artist had the chance recently to showcase his paintings during a “one-man show‘ hosted by Up North Arts.

Up North Arts member Mary Kidder said Matthew Hicks displayed 52 of his pieces on Sept. 19, 20 and 21. Kidder said Hicks sold 14 of his paintings — five to an art collector.

The Cadillac-based Up North Arts previously selected Hicks as their 2019 scholarship winner and Kidder said they think he has a bright future ahead of him.

“We’re going to be following him,‘ Kidder said. “We think he has a career (in this field).‘

Kidder described Hicks’ work as the opposite of conservative landscape or portraits. Hicks’ art teacher at Cadillac High School, Julie Cieslak, has described the paintings as “abstract expressionism.‘

Hicks said it’s hard for him to describe the paintings himself, as he simply tries to illustrate how he is feeling at the moment. “The thing I like about art is that it can be whatever I want it to be,‘ Hicks said.

Cadillac High School art teacher Beth Stebbins said Hicks became almost like an assistant teacher, helping to mentor the other students while working on his paintings.

“A lot of the students liked to watch him work but he was never a distraction,‘ Stebbins said.

This fall, Hicks will be enrolled in the art program at Northwestern Michigan College. His plan is to take advantage of the partnerships NMC has formed with other colleges to advance his studies.

He would like to one day make a living as a studio artist.

It might be a long shot, but Hicks said he wants to become the best painter in the world.

“I’ll aim high and see what I get,‘ Hicks said.