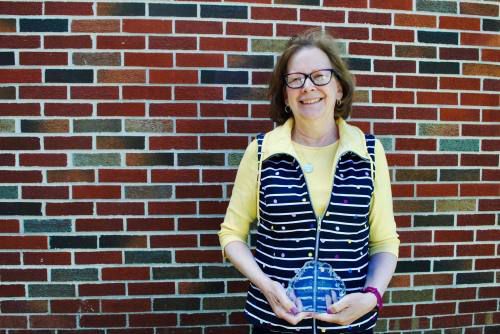 Kathy McCauliff poses for a photo with a gift she received from McBain Rural Agricultural School on June 3, 2019. 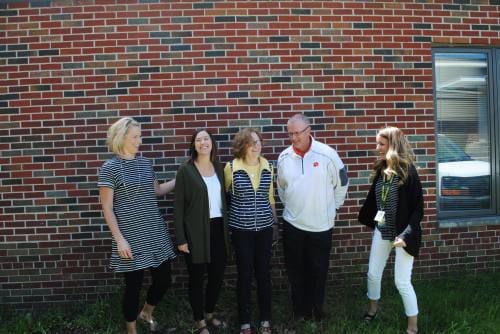 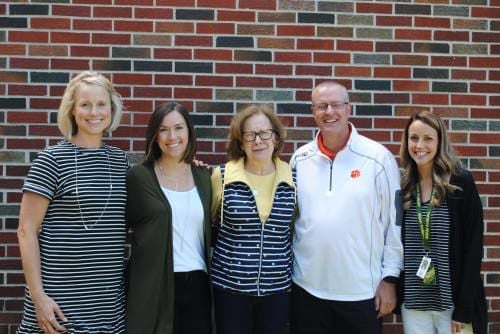 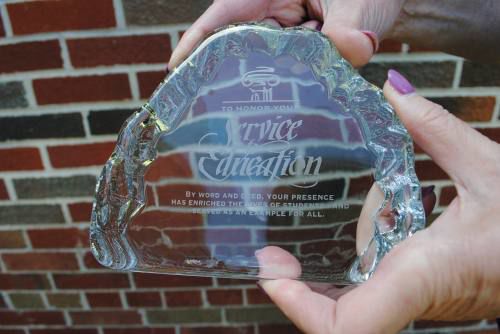 Retiring McBain Rural Agricultural School teacher Kathy McCauliff holds up a gift the school presented her at a retirement lunch on June 3, 2019. 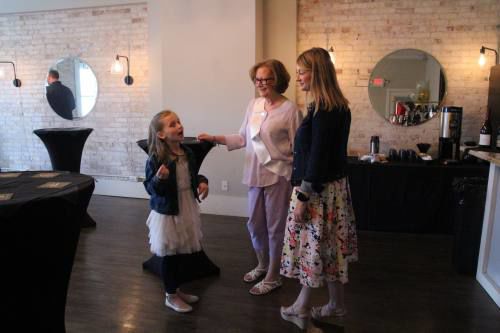 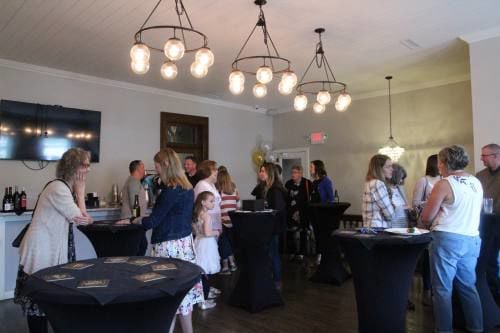 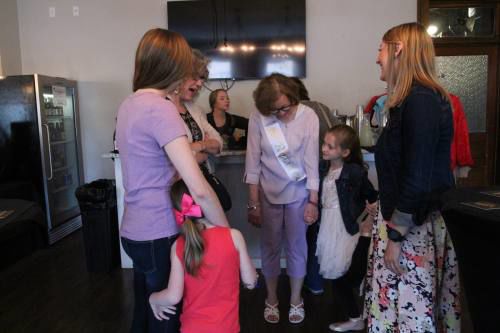 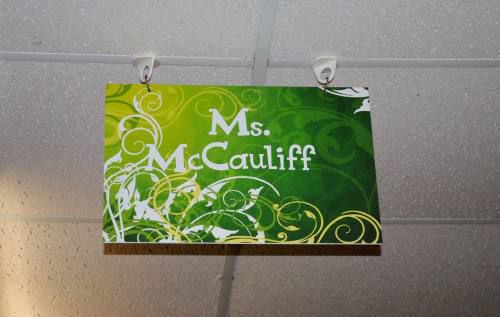 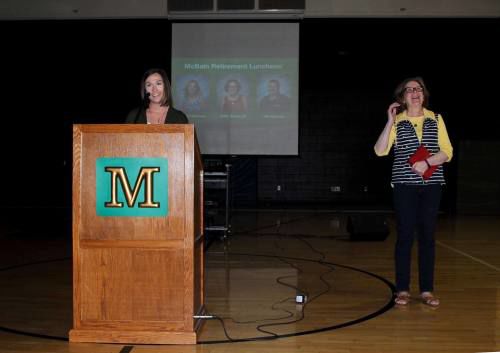 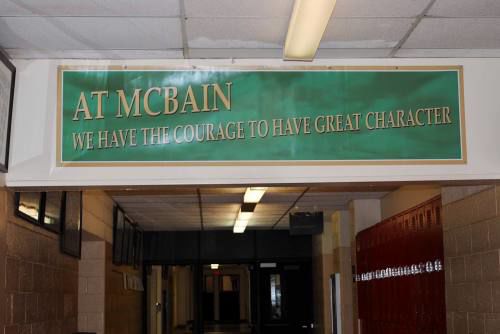 A sign at McBain Rural Agricultural School on June 3, 2019.

Kathy McCauliff poses for a photo with a gift she received from McBain Rural Agricultural School on June 3, 2019.

Retiring McBain Rural Agricultural School teacher Kathy McCauliff holds up a gift the school presented her at a retirement lunch on June 3, 2019.

A sign at McBain Rural Agricultural School on June 3, 2019.

Although he graduated in 2004, he can still hear her voice in the back of his head. She’s telling him to “focus,‘ “make good decisions,‘ “eat: your brain needs food,‘ “be smart,‘ and “have fun.‘

“In many ways, then, she is still very much my teacher, life coach, and mentor,‘ he wrote in a survey response.

After over 30 years teaching at McBain Rural Agricultural School and 40 years as an educator, McCauliff is retiring.

Her retirement will be effective June 30 and in July she will be moving to Muncie, Indiana, to be closer to her daughters and granddaughters and be a bigger part of their lives.

“I will start a whole new life,‘ McCauliff said.

In honor of her retirement, McCauliff’s co-workers, friends and family celebrated her time at the school and the impact she’s had on so many different people.

The impact she’s had on former students

In honor of their mom’s retirement, Kourtney and Kristen McCauliff decided to put together a memory book.

Using a Google survey, they asked people to share a story, thought or funny memory they have with her.

She must have had an impact on some lives, as the sisters received over 60 memories people shared with their mother.

Some former students kept it sweet and simple, like 1999 graduate Kasey Eisenga.

“She always made me feel important and valued as a student,‘ Eisenga wrote. “I loved her scoffs at the boys in class that were being silly.‘

Some students had McCauliff not only as a teacher but a coach, like 2002 graduate Tiffany Ziegler.

Ziegler was on McCauliff’s debate team her junior and senior year and it was by far one of her best high school experiences. The skills she developed through it have followed her throughout life, she said.

“It taught me more about life and how to think critically about situations than any other class ever could have,‘ she said. “Kathy not only taught us how to be successful with debate but as well as in life.‘

Some of the skills she taught them included how to research findings, prepare for rebuttals, be ahead of the competition by planning and have an overall understanding of the situation.

“The education system is losing a remarkable teacher but I’m sure everyone who has encountered her will have wonderful memories of the many things learned in her classes,‘ she said.

Paliewicz was also on the debate team and 15 years later has learned that McCauliff gave him much more than standards for policy debates. She also gave him standards for life.

These include: Education, the secret to this game of life; Limits, do nothing in excess, except for maybe research; Ground, stay grounded and know there is always space for constructive argument; Brightline, do the right thing; Framers intent, intentions and motivations matter.

“During a personal time of familial strife (high school and college), KMC was like a mother to me,‘ he said. “She was the voice of reason and a champion of intellectualism when that is what I needed most. Whether she knows it or not, she provided me with equipment for living.‘

The impact she’s had on her daughters

Some families have sports. The McCauliff family had debate.

Both parents were in collegiate debate and they all loved being able to share that passion.

“It was really truly a gift to share my passion with my mom,‘ Kristen McCauliff said.

Kourtney and Kristen McCauliff didn’t have their mom as a teacher, but they did have her as a debate coach. She started the team in 1996 and coached for around 15 years.

It ended about six years ago, but while it was active they were able to make it to state several years.

“She was really able to do a lot with the program,‘ Kourtney McCauliff said.

She thinks her mom is great at knowing someone’s potential.

Kourtney McCauliff was introverted and didn’t think she would enjoy the program, but her mom knew what she would be good at and got her into it.

Three of the four original members of the debate team are now in law and the fourth, Kristen McCauliff, is a communication professor.

Kristen McCauliff teaches communication studies, persuasion and rhetoric and said she can trace the development of the skills to her debate career. She credits getting her master’s and doctorate degrees to debate, which gave them good problem solving, critical thinking and presentation skills.

Although their mom is leaving the classroom, her daughters and the first debate team wanted to make sure there was still a way for students to access resources in her memory.

So they are setting up scholarships in Kathy McCauliff’s name and are currently accepting donations. They hope to have all donations submitted by July, they said.

They hope to have multiple smaller scholarships in their mom’s name through the McBain Rural Agricultural School Foundation. It’s for people graduating from McBain that are going into a debate program, going into education or are “linked into the things that made mom unique,‘ Kourtney McCauliff said.

The scholarships will be determined by how much money they are able to raise. If $2,000 is raised they could do four $500 scholarships.

People interested in donating can write a check to the foundation by making it out to MRASF and sending it to the foundation at 107 E. Maple St. in McBain or P.O. Box 95 in Falmouth. In the memo section state it is for the Kathy McCauliff scholarship.

The impact she’s had on her co-workers

She’s one in a million, she said.

“Kathy has been an important cog of the middle school for many years,‘ said middle school principal David Wissner. “It’s hard to imagine our building without her.‘

Leigh Ann Sikkema, a fellow language arts teacher, said it’s one thing when you lose someone who has been at the school for such a long time, but another when that someone is a phenomenal teacher.

“But she’s been all that and a really good friend,‘ she said, tearing up. “That’s why she will be sorely missed.‘

Kim VanderVlucht, the elementary teacher, said McCauliff had a way of bringing people together.

She’s a confidant and sounding board who gives her unbiased opinion, she said.

“She’s been a tremendous asset to the McBain district,‘ she said.

In a letter to superintendent Steve Prissel, McCauliff said while she has been fortunate to be part of the McBain teaching staff, it’s time to move on to other challenges and adventures.

“I want to thank the administration, school board, and staff for making the last 30 years truly memorable,‘ she wrote. “The support and close-knit bonds of those I have worked with will always remain in my heart.‘

How the school and all of them have impacted her

She has sat there and watched other people retire in the past so it’s strange thinking that that is her now. But it’s definitely time.

It’s bittersweet, though. She has a lot of good friends here in McBain and the school gave her opportunities as an educator.

She is going to miss the people, especially the middle school people, she said.

One of the things she will miss the most is McBain Rambler basketball and the young men and ladies who played and brought joy to her life.

She has enjoyed watching the players and coach Bruce Koopman over the years and plans to continue following them through the Rambler Review.

She’s also going to miss her students’ ideas in class. Even students who aren’t the best writers have wonderful ideas to share, she said.

“I will not miss the grading part,‘ she laughed, but she will miss the smiling and laughter it would bring her.

She thinks a lot of students think she’s a little too strict, but once they get older they appreciate the necessity of it. She hopes she has made an impact.

“I feel like I accomplished what I set out to accomplish with public education,‘ she said.