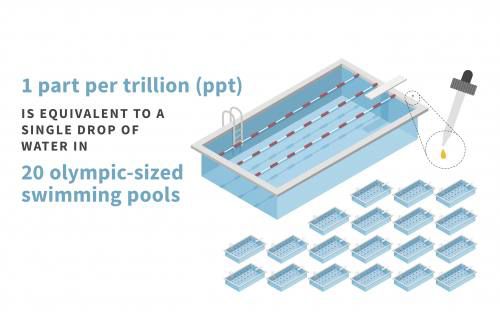 "1 ppt is equivalent to a single drop of water in 20 Olympic-sized swimming pools." The state could start regulating PFAS chemicals at 6 ppt. 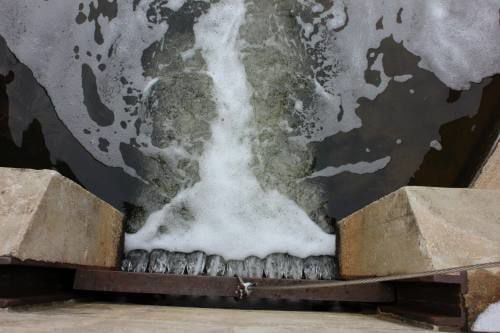 When treated water leaves the wastewater treatment plant in Cadillac, it must be at or below 12 parts per trillion of PFAS. Here, in this 2018 file photo, treated water enters the Clam River.

"1 ppt is equivalent to a single drop of water in 20 Olympic-sized swimming pools." The state could start regulating PFAS chemicals at 6 ppt.

When treated water leaves the wastewater treatment plant in Cadillac, it must be at or below 12 parts per trillion of PFAS. Here, in this 2018 file photo, treated water enters the Clam River.

CADILLAC — How much PFAS is acceptable in Michigan’s drinking water? Which communities need to be monitored?

Michigan is in the process of adopting additional regulations that would remake the state’s approach to PFAS, including limiting exposure to seven PFAS compounds in drinking water.

“The PFAS MCLs (maximum contaminant levels) will apply to all community and nontransient noncommunity public water supplies covered by the Safe Drinking Water Act in Michigan,‘ said Ian Smith, emerging contaminants unit manager in EGLE’s Drinking Water and Environmental Health Division. “These systems would be required to monitor following the parameters outlined in the rule language.‘

No PFAS chemicals were detected in the city of Cadillac, but the city is in the process of building a new well.

“We are installing two new wells on 44 Road and those will be tested soon,‘ said Jeff Dietlin, utilities director for the city of Cadillac. “The well that already had been installed on that site tested (non-detect).‘

PFAS was detected in the city’s wastewater, but the levels have been falling, Dietlin said.

The city has previously attributed that to waste that is now being pumped underground through an injection well at the landfill owned by American Waste in Wexford County instead of being treated at the city’s wastewater treatment plant.

PFAS chemicals have been found in nearby drinking water supplies.

At the Career Tech Center, a PFAS chemical known as PFNA was found at 14 parts per trillion (ppt) over the summer and decreased to 10.8 ppt as of a test in December. Under the proposed rule, PFNA would have a 6 ppt limit.

The CTC’s water is tested quarterly.

“We have every safeguard in place related to potable/consumable water and are planning to continue testing moving forward,‘ said David Cox, superintendent of the Wexford-Missaukee ISD.

In Haring Township, where PFAS was detected in low levels in the drinking water supply, officials are waiting on the state’s decision.

“We will be receiving a monitoring schedule once it gets passed by the state,‘ said Bob Polanic, project manager for Infrastructure Alternatives, which manages Haring Township’s water system. “That will have updated sampling requirements for PFAS.‘

In Cadillac, if the rules are ultimately passed as proposed, little will change.

“If limits are where the state has indicated and our levels at the wastewater plant stay the same we should be OK,‘ Dietlin said in an email to the Cadillac News.‘

But there are several more steps before those rules are finalized.

In January, a public comment period ended on the draft rules approved by the Environmental Rules Review Committee.

Now the Michigan Office of Administrative Hearings and Rules (MOAHR) is reviewing the rules, Smith said.

“MOAHR’s attorney would let us know if the changes we make to the rules after the hearings exceeded the rulemaking delegation contained (in) the statute that gave us rulemaking authority. MOAHR cannot and would not make changes to rules,‘ Smith said.

EGLE has previously said that a rule could be adopted in April.

But legislators will also get the chance to weigh in.

The Joint Committee on Administrative Rules (JCAR), which has five senators and five representatives, will be tasked with reviewing the rules, but hasn’t seen them yet.

“JCAR has 15 full session days to review the rules. During this period they have a number of options including asking the Department to make changes to the rules,‘ Smith said.

Last week Gov. Gretchen Whitmer banned gatherings of 250 people; meanwhile the legislators, who typically hold just three sessions a week, said they would hold sessions “as needed‘ though no session days had been canceled as of Friday.

“Known to scientists as per- and polyfluoroalkyl substances, PFAS are a group of emerging and potentially harmful contaminants used in thousands of applications globally including firefighting foam, food packaging, and many other consumer products. These compounds also are used by industries such as tanneries, metal platers and clothing manufacturers,‘ EGLE says.