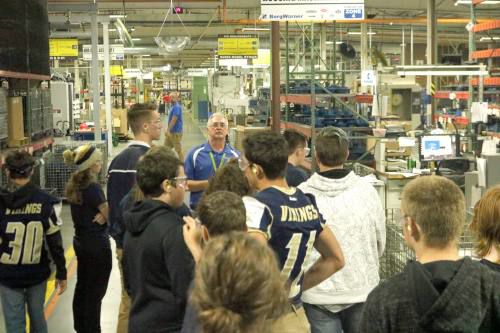 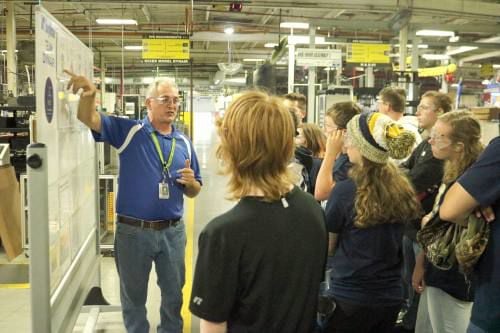 CADILLAC — Manufacturers in Michigan are doing quite well right now, even with the burden of not being able to find enough people to do the work.

The report gave Michigan’s manufacturing industry health for 2019 a grade of A.

David Miller, president of the Cadillac Area Chamber of Commerce, said Michigan’s high score in this category didn’t surprise him a bit.

“We make stuff in the Midwest,‘ Miller said. “In Michigan, we make things.‘

Data on manufacturing employment and wages reflects that Northern Michigan manufacturing has been doing better in recent years, with a slight caveat.

According to the Michigan Department of Technology, Management and Budget, the counties in this part of Michigan with the largest manufacturing base — Wexford and Osceola — have rebounded in number of employees since the time of Great Recession but still aren’t back to the levels they were prior to the Great Recession.

In the report, Michigan also received an A for productivity and innovation, which was based on industry research and development expenditures on a per capita basis, and the per capita number of patents issued annually.

He said colleges in other states also do this but what makes Michigan unique is that the universities are close enough to the industries to test out new technologies and collect feedback in a timely manner.

“It’s one of the big draws in Michigan,‘ Hicks said. “Research can’t just be done in a lab.‘

While industry health and innovation are strengths in Michigan, the report highlighted some areas of weakness, as well.

Miller said industries in Cadillac have struggled to find adequate numbers of employees over the years, especially skilled laborers, so he’s not surprised the state overall received a lower score in human capital.

“(Finding workers is) the biggest constraint to growth in this area,‘ said Miller, who theorized that Michigan’s high score in innovation might be due partly to companies increasingly relying on automation to compensate for not being able to find workers.

While the study didn’t address unskilled workers, Hicks said one of the factors contributing to the shortage of skilled workers in Michigan is the gap between older workers with minimal training and young people entering the workforce with degrees related to running automated systems.

“In the next five to 10 years, we’re going to see significant growth in automation technology,‘ Hicks said.

He said employment in manufacturing is essentially the same today as it was in the 1970s, yet they are producing two or three times the goods they were 40 years ago.

The emphasis on increasing efficiency has phased out some of the lower skill jobs, Shaffer said.

“A lot of that is our own fault,‘ Shaffer said. “We skipped an entire generation of people to train as tradesmen. We’re still under the old industrialized education system. China is doing the opposite. They’re producing more engineers than we have people,‘ he laughed.

In logistics, which received a grade of C, Miller said it makes sense that Michigan’s score isn’t that great considering the state is surrounded by water, making it more difficult and costly to transport goods to other areas.

States immediately south of Michigan, including Indiana, Ohio, Kentucky, Illinois and Pennsylvania, all received a grade of A for logistics.

Miller said those states sit at the “crossroads of America,‘ where there is a concentration of logistics-based businesses and product warehouses.

As for sector diversification, which received a D, Hicks said Michigan’s manufacturing history revolves primarily around the automobile industry, which explains the lack of diversity.

In Cadillac, however, Shaffer said there is more diversity owing to the city’s somewhat anomalous history as a place where independent tradesmen set up shop, offering a low-cost alternative for various services at that time only available in the Detroit area.

Those tradesmen eventually sold their interests to larger companies and today, the city is home to a wide range of manufacturing firms, from those producing military equipment to others that specialize in boats and vacuums.

When the recession hit 10 years ago, Shaffer said companies survived by scaling down their workforces. Today, with the economy doing better, they’re investing back into their employees.

That’s good news for people looking for a job but Hicks said it might be short-lived.

He predicts the manufacturing industry throughout the U.S. could be in for a rough patch starting at the end of this year and lasting well into 2020.

Ongoing trade disputes with China are starting to affect manufacturers in the U.S. as exports slow down, Hicks said. Signs indicate that the U.S. could be entering a period of recession as a result.

Dean Rohn, with Piranha Hose Products in Cadillac, said he’s optimistic the trade war will result in a more equitable agreement with countries that currently impose tariffs on American goods and pay no tariffs themselves.

“I’m not really sure why that started,‘ Rohn said.

With American manufacturers competing with companies in countries like China and Vietnam, which have far lower pay standards than the U.S., automation has become an essential part of the business, Rohn said.

Rohn said he expects automation will continue to expand, as will the trend of hiring fewer, highly skilled employees to run the machines.