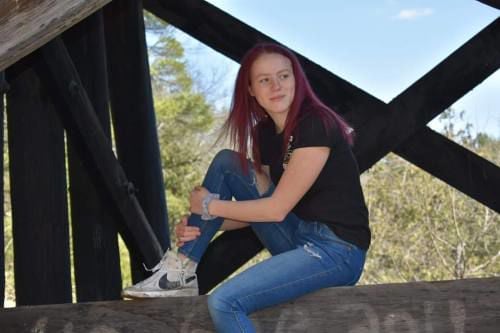 Angela Bigelow, 14, nearly drowned in Lake Billings on Wednesday, June 24, 2020 but was pulled from the water by Luke Puffer, 16, of Manton. 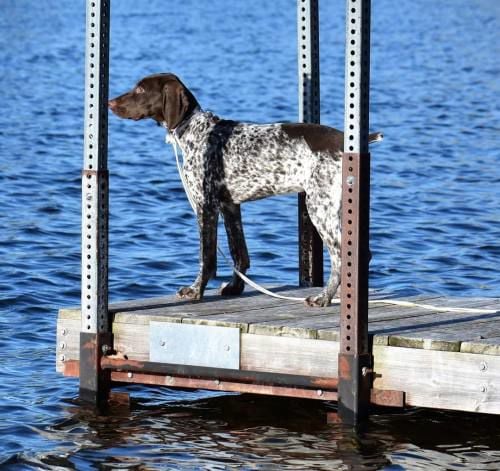 Gretta jumped into Lake Billings to chase ducks on Wednesday while Angela Bigelow was walking her; Angela nearly drowned while swimming after the dog. 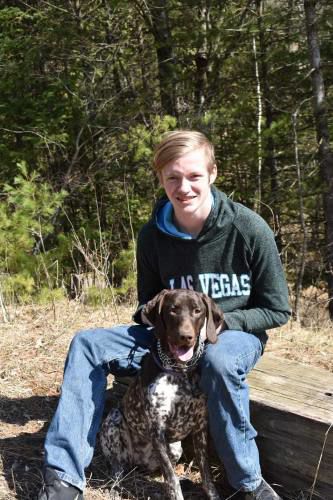 Troy Bigelow, 16, pictured with Gretta, the naughty dog that jumped into Lake Billings to chase ducks.

Angela Bigelow, 14, nearly drowned in Lake Billings on Wednesday, June 24, 2020 but was pulled from the water by Luke Puffer, 16, of Manton.

Gretta jumped into Lake Billings to chase ducks on Wednesday while Angela Bigelow was walking her; Angela nearly drowned while swimming after the dog.

Troy Bigelow, 16, pictured with Gretta, the naughty dog that jumped into Lake Billings to chase ducks.

MANTON — As far as her family knew, Gretta didn’t even particularly like the water.

The 11-month-old German shorthaired pointer had, until Wednesday afternoon, only been ankle-deep in the water.

But then, when 14-year-old Angela Bigelow and a friend were taking the pup for a walk near Lake Billings, Gretta spotted some ducks.

The dog took off, and the leash got dropped. Angela’s friend ran back to Angela’s house to tell Angela’s mom, Jennifer Mohler, that the dog was chasing ducks in the lake.

“I have to go swim after her,‘ Angela recalled thinking.

It didn’t go well. Though Angela is an experienced swimmer who has swum across Lake Billings before, the same is not true for Gretta.

The pursuit wore Angela out, though at first, her mind wasn’t on her own safety.

“I was more worried about the dog, because that’s my brother’s best friend,‘ Angela told the Cadillac News by phone on Friday.

Then, she realized she was also sinking.

Angela thought she was going to die in the middle of the lake.

“This is where it’s all going to end,‘ Angela recalled of her thinking in the moment. She kept her eyes on land and tried to swim toward it.

Luke, 16, was hanging out in hammocks at the beach with Jeremiah Vlaeminck, 16, and Carson Raasio, 16, when they noticed what was going on.

Luke jumped in the lake to go after Angela; Jeremiah went for a kayak and Carson chased down Gretta.

“We didn’t think we had enough time,‘ Luke said. “We just acted on it.‘

Luke is also an experienced swimmer who crosses Lake Billings regularly, according to his mother, Keri Puffer.

But swimming for fun and swimming for rescue are two different things, as both Luke and Angela will now tell you.

Luke said Angela was pretty afraid and tried to climb on top of him when he reached her. He had to hold her at bay, urging her to be calm, then to hold onto his shoulders while he swam her back to shore.

They both swallowed water; Luke says he threw up when he got to shore.

“I wasn’t scared,‘ Luke said, “But it was pretty difficult.‘

Luke said he knows he, too, could have gotten hurt but it was worth it.

Though they don’t know each other well, Angela and Luke are second cousins. But that wasn’t Luke’s motive — he didn’t even realize they were related.

“I just found that out right now,‘ Puffer said when the Cadillac News spoke to him Wednesday night a few hours after the incident — and after football practice, which Luke, Jeremiah and Carson all attended (Luke and Jeremiah in Manton and Carson in Cadillac).

As for Gretta, though the family loves her, even Troy Bigelow, 16, has told Angela it was stupid for her to swim after his “best friend,‘ Angela says.

“You might love your dog, but your dog’s life isn’t as important as yours,‘ Angela told the newspaper.

And there’s another new family rule: no more beach for Gretta.

“She’s not allowed to go back down there,‘ Mohler said.