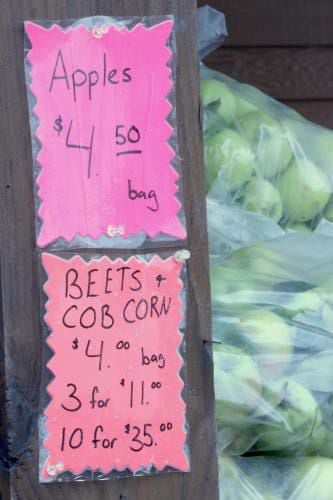 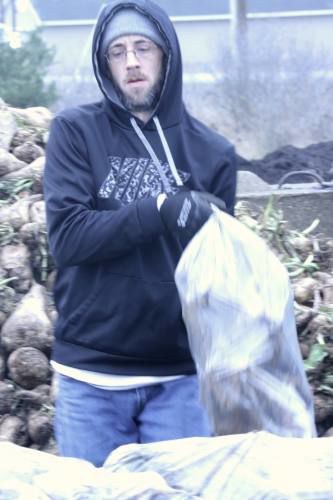 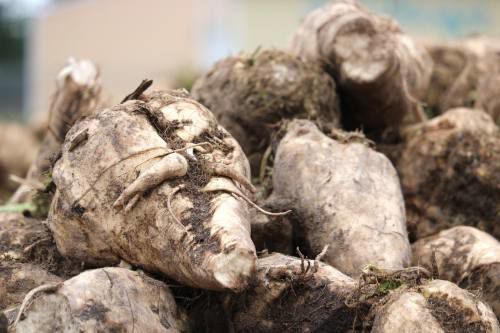 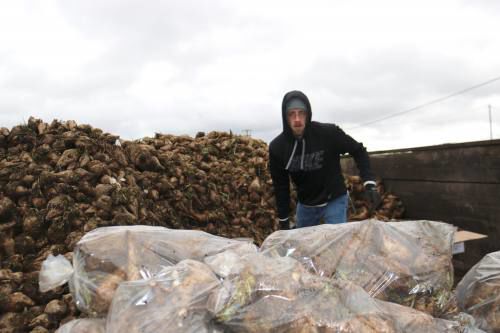 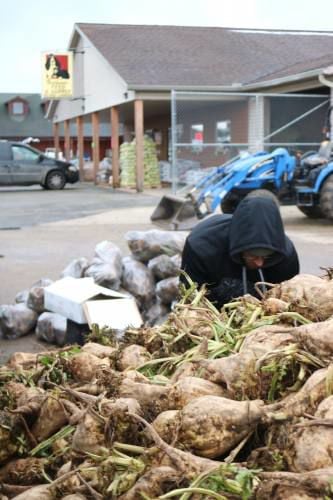 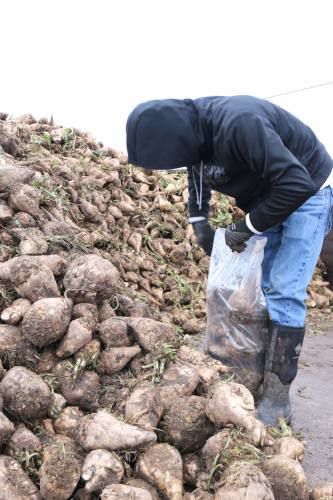 CADILLAC — Larry Westmaas is making the best of the situation.

Like many farmers in the area, Westmaas’ farm is a family farm. His father started it when he moved to the Marion area in the late 1950s. Historically, Westmaas said the farm has grown hay, and before that, potatoes. He said there has been corn grown as well as a fair amount of wheat.

With the first growing season that included a baiting ban for deer completed, Westmaas is doing OK. He still planted sugar beets but in his estimation, it was between one-third to one-half less than what he normally does. In its place, Westmaas said he planted more wheat, hay and black beans.

“It is a little more of a specialty market. If you have the time to do it correctly, you can get a decent yield,‘ Westmaas said of black beans. “We don’t have a big farm so we have to make as many dollars per acre as we can.‘

Westmaas grows both fodder beets and regular sugar beets. The fodder beets are preferred as animal feed because they have better nutritional value, he said. During the 2018 growing season, Westmaas said his farm had 100 acres devoted to the root vegetable, which yielded roughly 25 tons per acre. That meant in a normal growing season for sugar beets, Westmaas’ farm distributes roughly 5 million pounds of sugar beets.

If allowed the next growing season, Westmaas said he would go back to growing more sugar beets but he may not devote as much land as he previously has. For him, it comes down to dollars and cents. Sugar beets are just more lucrative for his farm.

“It is hurting me somewhat, but it is not a catastrophe for me,‘ he said.

BACKGROUND ON THE BAN

In August 2018, the Michigan Natural Resources Commission released its new regulations designed to combat the spread of chronic wasting disease.

For those who don’t know, CWD attacks the central nervous system of infected animals, resulting in emaciation, abnormal behavior and loss of bodily functions. There is no recovery, and the disease always results in the death of the animal.

To date, there have been no reported cases of CWD infection in humans. However, as a precaution, the Centers for Disease Control and the World Health Organization recommend that infected animals not be consumed as food by either humans or domestic animals.

These new regulations include a statewide ban on the use of all-natural cervid urine-based lures and attractants, except for lures that are approved by the Archery Trade Association. Also included is an immediate ban on baiting and feeding in the 16-county area identified as the CWD Management Zone. This area includes Calhoun, Clinton, Eaton, Gratiot, Hillsdale, Ingham, Ionia, Isabella, Jackson, Kent, Mecosta, Montcalm, Muskegon, Newaygo, Ottawa, and Shiawassee counties.

A ban on baiting and feeding in the Lower Peninsula, effective Jan. 31, 2019, also was part of the new regulations. There is an exception to this ban for hunters with disabilities who meet specific requirements. The start date on this regulation also was intended to allow bait producers and retailers time to adjust to the new rule.

This, however, isn’t the first time a ban was put into place in recent history.

In 2008, a baiting ban in the Lower Peninsula was initiated in response to positive chronic wasting disease test results from a single deer from a privately owned facility in Kent County. In 2008, a 3-year-old doe tested positive for CWD, but officials were uncertain how the animal contracted the disease.

The Natural Resource Commission voted in 2011 to temporarily lift the ban until the NRC decision in August 2018.

RETAILERS FEELING THE PAIN TOO

Northwoods Feed and Supply Manager Jerry Horvath said last year he believed the impact of the baiting ban would be felt but likely wouldn’t be too bad.

With the archery deer season in effect since Oct. 1 and the start of the firearm season looming next week, Horvath said the impact on the business has been more than he anticipated.

Northwood Feeds historically has sold bait such as sugar beets, cobbed and shelled corn, apples, carrots and other items such as salt blocks and minerals. This year, Horvath said they didn’t even order carrots because they believed the produce would rot before they could sell it.

“It has been tougher than we expected. Our deer feed is down 75-80%. It has hit us pretty hard and harder than we anticipated,‘ Horvath said. “Sales were down during the last ban but this is worse.‘

He said he hasn’t heard about tickets being issued by the Department of Natural Resources but there is speculation about the penalties. He said the belief is they are pretty severe and hunters are reluctant to push boundaries.

The feed the store does carry including sugar beets and more recently apples are being sold but the feed he is selling is going to the Upper Peninsula where it is still legal to bait. To put the impact in perspective, Horvath said in a normal year hundreds of tons of feed are ordered for carrots, sugar beets and other feeds.

He also said he doesn’t believe the ban will have the desired effect, but he also noted that he doesn’t know what the best answer is.

DOES LANSING HAVE THE ANSWER?

In September, Ted Nugent was in the state capitol to speak in support of legislation sponsored by Rep. Michele Hoitenga, R-Manton, in front of the House Committee on Government Operations. Both Hoitenga’s legislation, House Bill 4687 and Senate Bill 37, sponsored by Sen. Curt Vanderwall, R-Ludington, attempt to lift the baiting ban for white-tailed deer and elk.

During the hour-long committee meeting, Nugent spoke about how he is approached every day of his life by Michigan families who want to talk about hunting and the great outdoors. He said during the last couple of years those same people have expressed “heartbreak‘ and “anger‘ because the regulations in Michigan are pushing them out of the sport of deer hunting.

On Tuesday, the House Committee approved Hoitenga’s legislation. House Bill 4687 now moves to the full House for consideration. The measure cleared the Republican-led chamber on a mostly party-line 57-49 vote and was moved to the GOP-controlled Senate. It would end the ban that was approved in August 2018 by the state Natural Resources Commission to stop the spread of chronic wasting disease.

“Baiting is a method that hunters have relied on for generations, and there’s absolutely no evidence it contributes to the spread of disease,‘ Hoitenga said. “It’s silly for the NRC to ban hunters from scattering apples around their deer blinds when everyday deer graze on apples that fall off trees in nature.‘

The plan, House Bill 4687, would allow people to engage in baiting during open seasons on deer and elk in Michigan.

Last year, hunting and fishing license sales made up 20% of the Michigan Department of Natural Resources’ entire annual budget, equal to $83.5 million. These funds were used to aid the recovery of endangered and threatened species, including restoring thousands of acres of habitat and wetlands.

“The ban is doing more harm than good by chasing hunting families away from the sport,‘ Hoitenga said. “The revenue generated from hunting licenses helps support conservation efforts carried out by the DNR, and hunting enthusiasts play a crucial role in supporting our state’s northern and rural economies.‘

Hoitenga said she is opposed to the ban because she doesn’t feel it is based on sound science but that shouldn’t be misconstrued as her being anti-DNR. She said the DNR does good things and they are a needed part of conservation in the state. Her opinion is the ban is based on “flawed research.‘

One thing that shouldn’t is ethics.

Currently, there is a ban on baiting for deer. That is true for either hunting or recreational viewing. While the ban is in place hunters or residents need to follow the rules that have been put in place. He also said DNR officers will be out looking to uphold the current ban.

“When it comes to the baiting ban everyone has different viewpoints but the most important thing we have is our ethics. It is currently illegal so as ethical sportsmen we have to abide by the law,‘ he said. “If you are in disagreement, reach out to the NRC or your elected officials or if you support it. It comes down to ethics and it is against the law. We are asking all hunters to abide by the law.‘

Molnar said if a hunter or resident is caught baiting or feeding deer, they will be guilty of a misdemeanor. A person caught baiting or feeding is subject to 90 days in jail with fines not less than $90 but no more than $500. Molnar said the $90-$500 fine does not take into account other fees that will be charged as part of court proceedings. He also said those are not set by the DNR but rather the court.

He said while the ban is in place his officers will address every violation regardless if it is baiting or feeding. He said if a conservation officer encounters someone placing food on the ground the violation will be addressed. He also said the DNR’s efforts will include conservation officers out in the field as well as aerial surveillance.

Molnar said regardless of where a person falls in the baiting ban debate, he wants hunters to be safe.

The Associated Press contributed to this report.