Horizon Books has this display featuring patriotic literature for July 4, 2020.

Disney Plus will start streaming a filmed version of the Original Broadway Cast performing the smash hit "Hamilton." The recording will be on the video platform starting July 3. 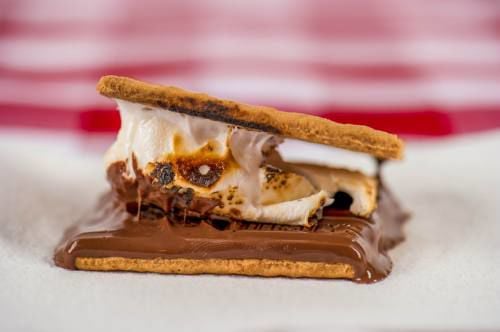 S\'mores are a Fourth of July classic. You can experiment with different kinds of chocolate or crackers, or just go old-school. 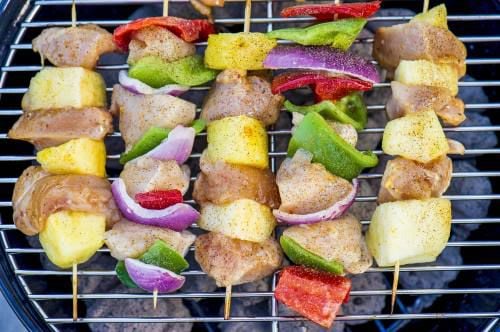 Try cooking your kebabs over the bonfire (just be careful about cooking meat to the right temperature—you might want to use, like hot dogs or sausages, instead of unprocessed raw meat). 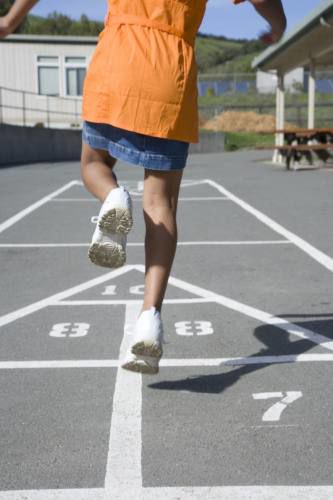 Experiment with making a patriotic hopscotch court for some social-distancing fun in the driveway.

Horizon Books has this display featuring patriotic literature for July 4, 2020.

Disney Plus will start streaming a filmed version of the Original Broadway Cast performing the smash hit "Hamilton." The recording will be on the video platform starting July 3.

S\'mores are a Fourth of July classic. You can experiment with different kinds of chocolate or crackers, or just go old-school.

Try cooking your kebabs over the bonfire (just be careful about cooking meat to the right temperature—you might want to use, like hot dogs or sausages, instead of unprocessed raw meat).

Experiment with making a patriotic hopscotch court for some social-distancing fun in the driveway.

CADILLAC — It's an unusual Fourth of July. The COVID-19 pandemic's social distancing requirements mean families will have to consider how to celebrate our nation's independence safely.

In typical years, the week of July 4 is booked with festivals, from Traverse City's Cherry Festival, Lake City's Greatest 4th in the North and Cadillac's Freedom Festival.

But they're all called off this year.

Instead, families will be celebrating the holiday at home.

The Cadillac News compiled a list of at-home activities to celebrate the holiday.

If you're celebrating with friends or neighbors, some of the activities may need to be adapted to maintain social distance.

Touching would defeat the purpose of this classic playground game, where kids (and adults) hop through a "court," skipping over the "square" with a marker. Since you don't want competitors getting too close to each other—either for assistance or for treachery!—hopscotch is a game that can be easily adopted for social distance.

Have fun with the design of your court! Though a traditional hopscotch court has squares lined up in a column, with alternating single or side-by-side squares, you can design the court any way you want. You could use the American flag for inspiration, with stars and stripes instead of squares.

Use red, white and blue chalk on your driveway or patio to keep it festive, and make sure your markers/balls/beanbags are all different from each other, so you won't share the same marker.

You may have already been planning on playing cornhole for the Fourth of July. Good news! You still can! Just adopt your "house" rules so you aren't sharing bean bags, and, if you're switching sides, give each other some distance while you pass.

You might also consider having your "teams" be from the same household; instead of sisters versus brothers, play Smith versus Jones.

Hide-and-seek, the classic game where the person who is "it" counts to a pre-determined number with their eyes closed while everybody else goes and hides, can be done in a socially distant way.

Some families combine hide-and-seek with "tag," but for proper social distancing, you'll want to nix that. A person becomes "it" when the the seeker says "(Name) I see you."

Little kids sometimes like to hide in the same spot, so if your kids are in a phase where they're likely to want to follow somebody else into a tiny hidey-hole, this might not be the best socially-distant option.

We checked with Horizon Books of Cadillac about the Fourth of July books in their holiday display.

There are more books on the display, of course.

If you subscribe to the streaming service Disney Plus, the big news of the weekend is that the Broadway smash hit "Hamilton" is dropping on the service on July 3. It's not a feature film version of the musical; it's a filmed version of the original cast.

If singing and dancing aren't your style, try the 90s classic movie "Independence Day" and watch the president save us from aliens.

You might also consider "Born on the Fourth of July," about Vietnam, "Jaws," or "Captain America: The First Avenger," suggests Elle.com.

For socially-distant but social movie-viewing, consider watching your movies outdoors.

You don't necessarily need a projector and screen to pull it off. You could move your TV outside, or set it up so it's facing outside a window. Pop the screen off and place your lawn chairs facing the house.

More "Hamilton!" Musical fans could listen to the Hamilton soundtrack using various music streaming services. Or you could try the original Broadway cast recording of the musical "1776."

Musicals not your jam?

There's Bruce Springsteen's "Born in the U.S.A," Bob Dylan's "Highway 61 Revisited" or Martina McBride's "The Way That I Am" (which has her classic, "Independence Day.")

There's a lot more—make a playlist of your favorites!

The bonfire classic sweet treat can be cooked in a socially distant way; all you gotta do is melt a marshmallow on a stick over a fire, then squish it between graham crackers and chocolate.

But to be sure you're making your s'mores in a socially-distant way, look for longer sticks, and have the kids take turns at the fire, so they aren't all smooshed together as they roast their marshmallows.

You can also consider making individual s'mores kits ahead of time. Rather than having kids (or adults!) return to the same marshmallow bag several times, divvy up the marshmallows and chocolate and crackers into individual bags ahead of time. That will reduce the amount people are touching the same surfaces and might provide some portion control.

You can liven up your smores by experimenting with different kinds of chocolate. Instead of a plain milk chocolate bar, try one with peanuts or fruit in it. Similarly, you can try making a s'smore out of flavored graham crackers, cookies, or something else flat and crunchy.

The kids may like roasting hot dogs over the fire, but don't forget, adults—brats can also work. Any oblong meat that's been pre-cooked ban be delightfully roasted on a stick over a flame.

Kebabs are a classic bonfire meal. Roast 'em the same way you would a hotdog or a marshmallow, subject to your own tolerance for charring.

YouTube and Pinterest are full of ideas on other snacks you can bake over a fire, from bananas-with-chocolate (leave the peel on to keep the chocolate in place) to grilled cheese sandwiches.

— Continue to social distance by staying 6 feet away from others, especially if you are at a high risk for serious illness from COVID-19.

— Continue to wear cloth face coverings in public. Face coverings are most essential when physical distancing is difficult.

— Wash hands frequently or use hand sanitizer when soap and water are not available.

— Stay home if you are sick.