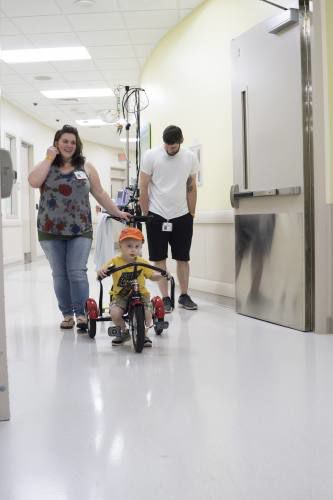 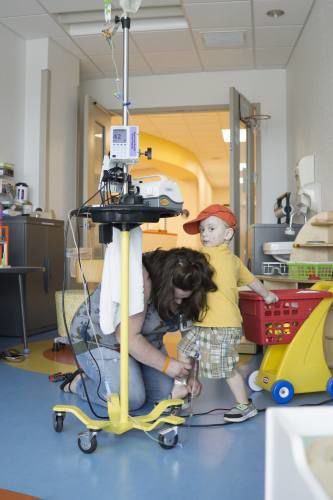 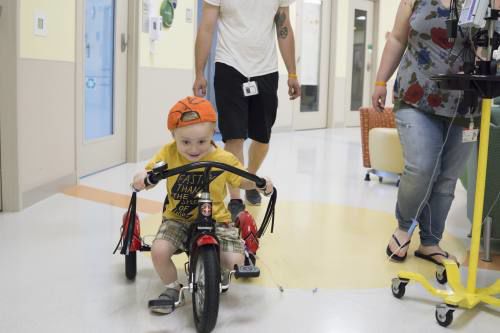 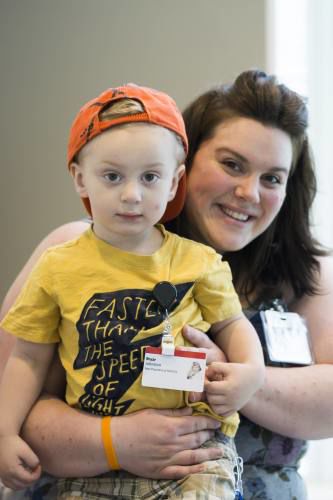 Cortney Johnston and her son, Bryar, pose for a photo taken by Nikki Cashen.

Cortney Johnston and her son, Bryar, pose for a photo taken by Nikki Cashen.

CADILLAC — Cortney Johnston’s mother used to tease her about how laid back she is.

But recently, she’s come around to realizing that her daughter’s personality is working in her favor.

“With a book, and coffee and just, like, my feet up, I don’t need to do anything,‘ Johnston said. “And she said, ‘I’ve always given you a hard time ... but thank God you’re like that.’‘

Johnston, 33, of Manton and Harrietta, is the mother of 2-year-old Bryar. For the second time since he was 5 months old, Bryar is being treated for a somewhat uncommon form of cancer, acute myeloid leukemia, or AML.

There’s a lot of waiting.

“I just play a lot of construction with my son and we just veg out,‘ Johnston said.

Bryar, who received a bone marrow transplant earlier this year, has received most of his treatment but is staying in Grand Rapids for various additional testing.

It’s not all vegging out. Johnston is working very hard on another project. And that’s where the Cadillac News, which is granting Cortney’s Believe Wish for a website, comes in.

Friends and family have been following Bryar’s story, as told by Cortney, through the Facebook page Fight Like A Bear. She wants to upgrade to a website.

It’s not just for updating well-wishers on Bryar’s progress.

She wants to help other mothers of children with AML.

When her son was first diagnosed with the form of leukemia, Johnston wasn’t sure what doctors were saying.

“I was like, ’What is that? That’s cancer, right?’‘ Johnston recalled.

Leukemia was not on her radar. But when his face and mouth started swelling, the Johnstons took him to the pediatrician, who sent them to the hospital, who then sent them to DeVos, who told them it was cancer.

It’s the second-worst thing you can hear, she said — that your child has a possibly terminal illness, “and you can’t fix it.‘

Since Bryar’s initial diagnosis, Johnston has met other parents of kids with AML in the area.

“It’s not common,‘ she cautions, “But it’s not so uncommon as I thought it was.‘

Johnston wants to raise awareness of the disease.

“With childhood cancers, only 4% of the national funding is given for childhood cancer research and stuff like that,‘ Johnston said. “It’s not, like, given the light that it should get for how big of a thing it is.‘

The newspaper can help her with her outreach goal through its digital services arm, CN Digital Solutions.

“She’s the voice for other moms ... a lot of times parents don’t know where to go,‘ said Katheryn Kidder, senior account representative for the Cadillac News. “She’s going to help another family.‘

“I thought it was fabulous, what she was doing,‘ Kidder said. “We can help her get this out to the world.‘

Besides Bryar, Johnston is mother to two other kids (Sophia, 9 and Brody, 1). Her husband lives in their Manton home, which Johnston has never lived in because she’s been in Grand Rapids with Bryar. The kids all need a different version of her, she said. When the whole family visits Grand Rapids, “I have to re-learn how to be a mom to three again.‘

There have been days of “ugly crying‘ as Johnston puts it.

How does she stay sane?

“We’re all crazy here,‘ she said, in a cheerful reference to “Alice in Wonderland.‘

For her own relief, Johnston needs a communication outlet, which the website will give her.

“I’ll have a hard day — and I don’t know if this is a normal thing — sometimes I cannot fall asleep until I write down what’s in my head,‘ she said.