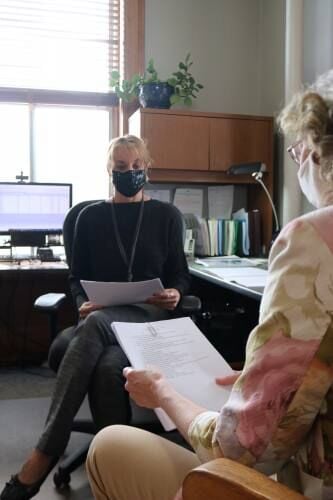 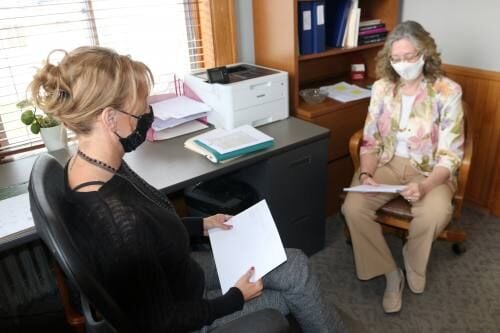 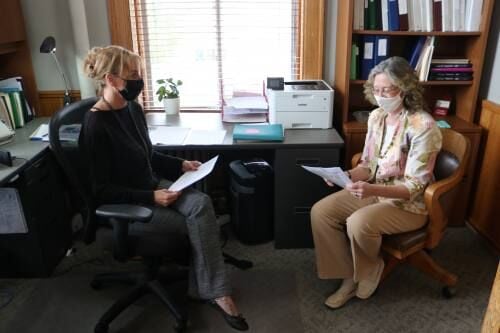 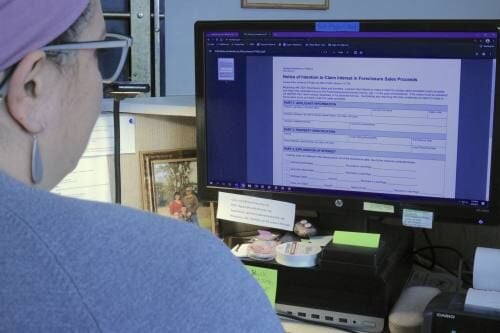 Wexford County Deputy Treasurer Tiffany March looks at the online Notice of Intention to Claim Interest in Foreclosure Sales Proceeds form. It likely will be several months, if not longer, before Wexford County knows what will happen regarding multiple tax-foreclosure civil lawsuits that have been brought against it.

Wexford County Deputy Treasurer Tiffany March looks at the online Notice of Intention to Claim Interest in Foreclosure Sales Proceeds form. It likely will be several months, if not longer, before Wexford County knows what will happen regarding multiple tax-foreclosure civil lawsuits that have been brought against it.

CADILLAC — It likely will be several months, if not longer, before Wexford County knows what will happen regarding multiple civil lawsuits that have been brought against it.

Last summer, the Michigan Supreme Court ruled that counties cannot sell the tax-foreclosed property at a profit without compensating the individual the property was taken from. In its opinion, the court also called county profits over and above the foreclosed upon amount an "unconstitutional taking."

That decision rendered from Rafaeli, LLC v Oakland County presented a substantial change to how Michigan municipalities must deal with surplus proceeds from tax-foreclosed properties. Foreclosing units of government that sell the property to satisfy a tax debt must disburse all surplus proceeds back to the title owner at the time of the foreclosure. It is a violation of the Michigan Takings Clause to retain the surplus proceeds above what is necessary to satisfy the tax burden.

While there are three local cases, Koch said those likely won't be decided until after the cases in the United States District Court for the Western District of Michigan, including the Grainger and Calkins cases, are decided.

"A lot of decisions are hinging on that because that was kind of the first case post-Rafaeli decision. The problem is the judge will decide something and then they immediately appeal," she said. "So we are kind of left waiting."

What all this could mean for the county also is unknown at this time, according to Koch. While much is unknown, Koch said regardless of what final decision is given Wexford County shouldn't have a massive financial problem. She said that because the situation Wexford County is in is different than most of the other counties facing similar suits that have garnered a lot more revenues.

She also said it is unknown if it would be something insurance companies would cover and that is still a big question that doesn't have an answer.

She also said a lot of things will have to happen to address the process of how the money is collected, who can get it and how far back it does it. Koch also said the fair market value claim was rejected by the courts. She said no county in Michigan has that kind of money if that decision gets reversed.

"It gets really complicated, really fast," she said.

Wexford County Treasurer Kristi Nottingham said the county changed how it handled tax foreclosures for a few years. She said they have been "holding back" to prepare for the potential of having to reimburse the former property owners.

She also said there is a form on the county's website for these types of claims. Annually, all claims of interest in foreclosure sale proceeds must be turned into the Wexford County Treasurer between April 1 and July 1.

Nottingham said annually there are between 20 to 25 of these types of tax-foreclosures the county gets involved. She also said, typically, they are not sold for a whole lot. They usually sell for the minimum bid, which includes back taxes with interest, administration fees and the county also receives 5% of the sale price. After that, people can file a claim and it will go to the circuit court.

"It's not good, but we (Wexford County) are not going to lose as much as what everyone thought," Nottingham said. "We are going to change how we do it and we already are in the process of doing that."

To see the form for making claims regarding tax-foreclosed properties, go to www.michigan.gov/documents/treasury/5743_Notice_of_Intention_to_Claim_Interest_717526_7.pdf.