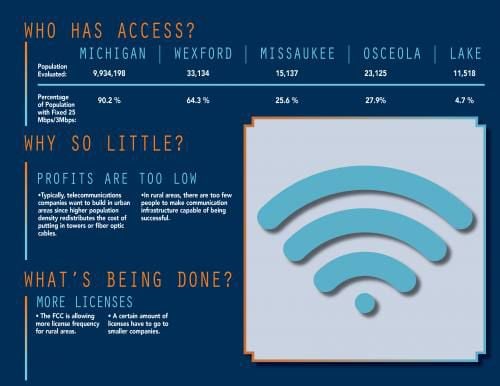 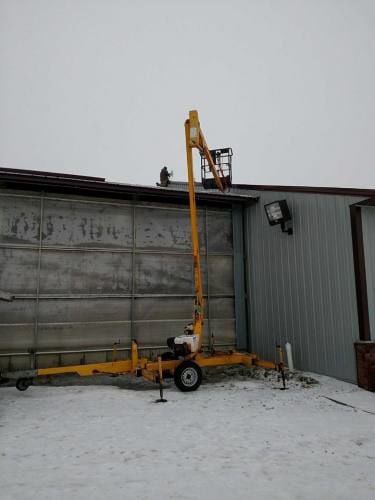 Amp Wireless LLC, which provides wireless broadband to the McBain and Lucas area, does installation for a customer.

Amp Wireless LLC, which provides wireless broadband to the McBain and Lucas area, does installation for a customer.

CADILLAC — Because it’s not working right, sometimes Merritt resident Sandy Cain wants to “throw the whole thing out the window.‘

Cain is unhappy with her internet.

In Michigan, 90.2 percent of the state’s population had access to fixed internet that met that standard, compared to 92 percent of all Americans, according to the FCC’s 2018 Broadband Deployment Report.

But in local counties, far fewer people have access to internet that meets the FCC’s standard.

Telecommunications companies find more profit by building in urban areas because the cost of installing towers and fiber optic cables is distributed among more people.

While private and public investment is available for the “middle mile‘ in Cadillac and surrounding rural communities, lack of funding prevents expansion to homes and businesses in the “last mile,‘ he said.

Residents in all counties say their lives are affected by weak or nonexistent internet.

Internet connection is feet away, but inaccessible

When LeRoy resident Jeff Morey moved there seven years ago for a job, he figured internet would eventually be available.

But when his 7-year-old needs to use the internet for homework they have to travel four miles to the library. Phone data plans don’t help.

“It’s way too hard to do any type of homework on a phone,‘ he said.

For a while, the family had AT&T UVerse, but the company stopped the service, saying he lived too far away, Morey said.

“I really don’t see why there’s not internet where I live,‘ he said.

The family lives across the highway from the high school, which has internet.

Michigan’s government needs to work on this, Morey said, and internet is a huge point when it comes to education

In Wexford County, Ed Deboer lives just four miles from the north end of Cadillac and doesn’t have internet access, even though service providers are close.

Charter service ends eight-tenths of a mile from his house.

AT&T put a fiber optic cable through his front yard about three years ago, but he can’t access it.

About a year ago Deboer saw an AT&T worker at a junction box 100 yards from his house. Deboer asked if he could connect the whole neighborhood. The man said he couldn’t.

“Literally it runs through all of our front yards and they will not connect it,‘ he said.

An AT&T spokesperson did not respond to a request for comment.

Being close to a service provider doesn’t guarantee fast internet, according to Merritt resident Sandy Cain. She knows people out-of-town who get better service.

Bad weather can foul her connection, even as she’s looking for storm updates online, she said. Her service works about half of the time.

Friends and family are shocked that Luther resident Eric Sandberg doesn’t have an internet service provider at home.

It was frustrating to realize unlimited phone data was cheaper, Sandberg said in a Facebook message.

Does Michigan have broadband deserts?

Michigan might be known for lush forests and Great Lakes, but it could also be home to deserts.

“We have broadband deserts in this country,‘ Federal Communications Commissioner Jessica Rosenworcel wrote in a statement. “We have places where networks do not reach and where digital opportunity is hard to find.‘

Getting internet to rural areas is much harder than in populated areas, said Aaron Pluger, who owns Amp Wireless LLC in McBain.

The company provides wireless broadband to 40 residential and 10 business customers in the McBain and Lucas area.

Internet access is improving, but people don’t understand why it isn’t everywhere, he said.

Pluger’s business is a line-of-sight service. Frequency is free from the FCC.

The FCC is allowing for more license frequency in rural areas, Pluger said.

Without higher frequency licenses, rural areas with hills and trees depend on towers, which cost about $12,000 to $15,000.

It’s a long time before tower investments pay off and he can build another, Pluger said.

Providers won’t put in the infrastructure if they don’t have the customers, said Osceola County Community and Economic Development Coordinator Dan Massy.

They’ll choose areas where they can serve more people.

Basic broadband service prices in Cadillac are fair, but there are fewer options compared to many other parts of the country, Van Alst said.

Beyond two miles of downtown, it would be a challenge to find a provider delivering much more than half the FCC standard speed on a wide scale, he said.

The FCC could expand broadband service to over 713,000 rural homes and businesses in 45 states through the successful Connect America Fund Phase II Auction, according to an FCC press release.

Companies that win bids will be able to put broadband in rural areas, Massy said. Auctions enable companies to build over a certain period and profit without subsidies.

Casair, Inc. won the auction for this area, he said.

The carrier will host a meeting soon. Massy believes it will be about the broadband rollout and a timetable.

A true broadband network for the masses can improve quality of life for all, Van Alst said in an email.

Small communities are revitalizing as people move from the cities to the country.

“Our vision is to create vibrant, relevant and sustainable rural communities,‘ he said.